Big Ten Links: Plenty at stake in OSU vs. PSU 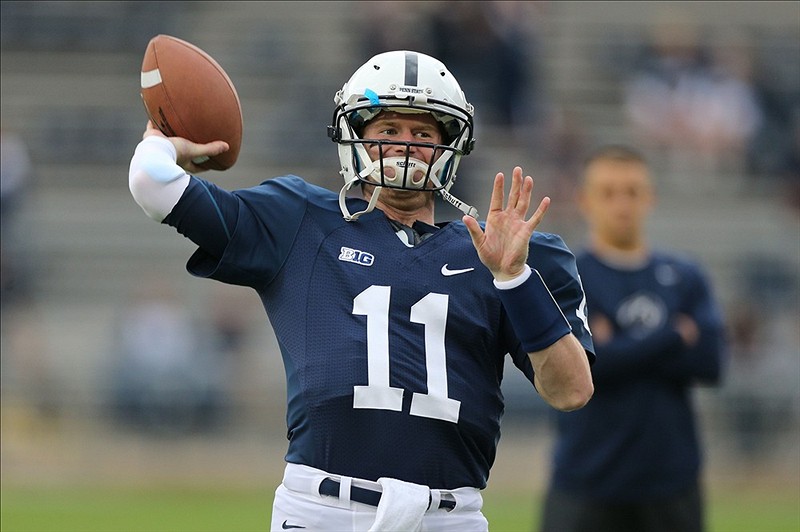 Yes, neither Ohio State nor Penn State can win the Leaders Division because of NCAA probation. But David Jones of the Harrisburg Patriot-News says a lot still will be on the line when the schools meet on Saturday-especially for the Nittany Lions. I have that and more in Tuesday's Big Ten Links.

For Penn State, a win would send a message to recruits that it can compete and beat the best, possibly helping to fuel a roster that will need all the talent it can get in coming years as it deals with having only 65 instead of 85 scholarships as NCAA sanctions begin to take a grip.

Beware the ?Barge:? Never heard of it? It?s a formation Wisconsin unveiled last week, with running back James White taking a direct snap.

The Badgers used the formation four times in last week?s win over Minnesota. Coordinator Matt Canada has had it in his bag of tricks since he arrived in Madison before last season. Hey, it?s just another weapon for an offense that continues to improve. Like Canada needs another weapon.

On the mend: Ohio State coach Urban Meyer says Braxton Miller is ready to go at Penn State after leaving last week?s game vs. Purdue with a neck injury.

It seemed more like a matter when-not if-Miller would get hurt. He?s exposed a lot by an offense that has him run often. Despite the risks and recent near catastrophic injury, the Buckeyes have no plans to alter how they use Miller.

"He's our best player," Meyer said. "I think we are trying to balance it. But at some point you've got to try to move the ball a little bit, too."

Rosey outlook: Michigan knows what its expectations are: It?s Rose Bowl or bust. And it isn?t running away from them as it attempts to get to the ?Granddaddy Of Them All? for the first time since the 2006 season.

Next up in its quest for Pasadena is a trip to Nebraska. And it will be a classic battle of strength on strength, with the Cornhusker offense battling the Wolverine defense. Each is among the best in the Big Ten.

What's next? Iowa?s postseason future is clouded by injuries and an inept passing attack.

The Hawkeyes have five games to win two more games to become bowl-eligible. Not having left tackle Brandon Scherff will hurt, as he will miss the rest of the season with a right leg injury. And right guard Andrew Donnal also will miss the Northwestern game with a right leg injury. Add it all up: And this is gut-check time for the Hawkeyes as they head to Evanston. What?s it gonna be, Herky?

New plans: Illinois coach Tim Beckman is going to try a new approach. Why not? The Illini are in the midst of a four-game losing streak and the season appears to be slipping away.

Beckman?s new mantra: ?Win the day.? That?s a stark contrast to the preseason goal that Beckman had stamped on wristbands worn by coaches and players: ?12-1-12.? That?s the date of the Big Ten championship game this season.

?The mentality coach Beckman has of one day at a time, I?ve tried to keep that myself since I started playing football,? said offensive tackle Simon Cvijanovic. ?I think maybe we got away from that a little bit with the Big Ten championship, wanting to go to that, the 12-1-12 thing.

?It maybe would have been better to take one day at a time from the start.

?I?m not saying that?s the reason things have happened the way they did. I just think it?s a better mentality. The mentality we have right now is the way it?s supposed to be.?

Bielema: I thought James White would be my 1st Heisman Trophy candidate, before Montee did what he did. (So wait till next yr #badgers fans)

My take: Heck, some think White is better than Ball right now. Just an embarrassment of riches at running back for the Badgers.

LBs coach Ross Els on the challenges defending Denard Robinson: "Every play looks like a punt return with him" #Huskers

My take: That sounds about right.

My take: But no Matt McGloin or Taylor Martinez? Shameful.

My take:This only can be a good thing.

Coach Danny Hope: "We're going to have to be road warriors for us to have the season we want to have." #Purdue has 3 of last 5 on road.

My take: It all begins at Minnesota on Saturday. A loss there, and Purdue could REALLY be scrambling to make a bowl.