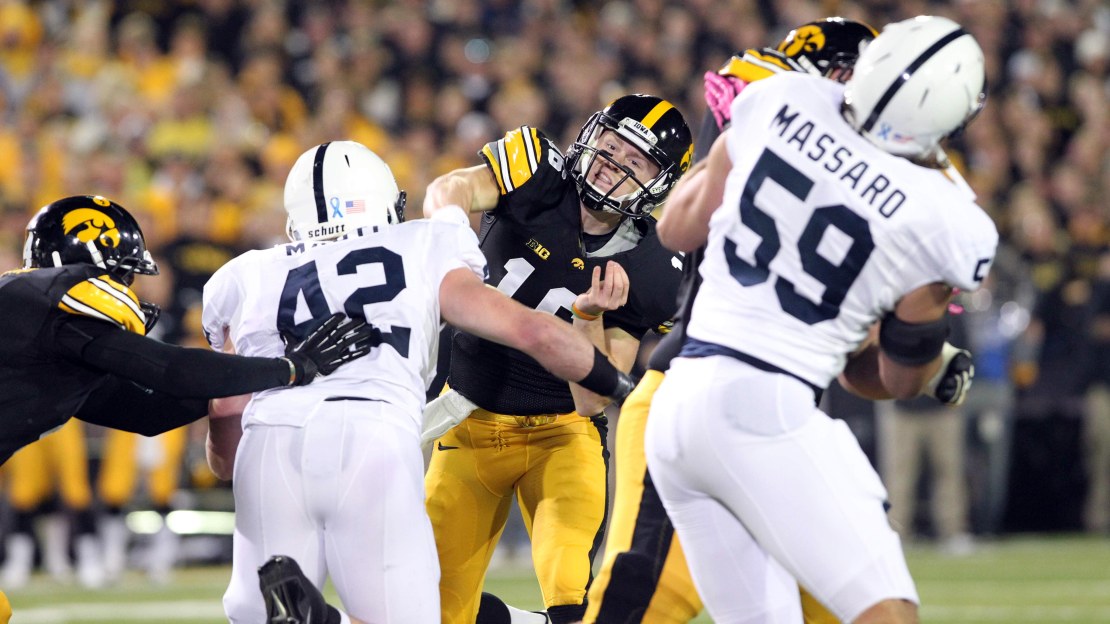 Saturday is fast approaching. Here are my most pressing questions for each school. The answers may come Saturday, but if you want to tackle them now, let me know in the comments box or via my Big Ten mailbag. Read all of my Big Ten coverage here. And don't be afraid to drop ask me a question on Twitter (@BTNTomDienhart).

Illinois
Will the offense come to life? Yes, the defense has had its issues, too. But the root of the Fighting Illini's problems has been on offense. Illinois has lost its three Big Ten tilts by a combined score of 111-21. The attack ranks last in the Big Ten and 112th in the nation in total offense (309.6 ypg). The scoring also ranks last in the league (18.1 ppg) and is 111th in the country.

Indiana
Can the Hoosiers find a way to close out a victory? Indiana has come close the last three weeks, losing 31-27 to Michigan State; 52-49 to Indiana; 31-30 to Navy, pushing its losing streak to five games. IU blew second-half leads vs. the Spartans and Midshipmen. The Hoosiers continue to make strides and seem close to a breakthrough.

Iowa
Do the Hawkeyes need a dual-threat quarterback to make their offense go? One writer who covers Iowa thinks so, opining that coordinator Greg Davis' attack is best suited for a signal-caller who can run and pass. A speedy athlete under center who allow Iowa to better combat the speed of defenses. But, for now, James Vandenberg remains the man. Iowa really has no other choices.

Michigan
Will the offense have to open up? During the three-game winning skein, the Wolverines have relied heavily on the run. And they may be able to at Nebraska, which historically has had issues stopping mobile quarterbacks like Denard Robinson. In last year's 45-17 Michigan win over Nebraska, Robinson ran 23 times for 83 yards and two touchdowns. Running back Fitz Toussaint carried 29 times for 138 yards and two scores.

Michigan State
Can the defense slow down Wisconsin running back Montee Ball? The Spartans rank No. 1 in the Big Ten vs. the run (100.3 ypg). The Badgers are gaining momentum after a slow start, ranking No. 5 in the league in rushing (200.6 ypg). And Ball is No. 3 in rushing (122.8 ypg). MSU also must worry about James White, who has run for 124 and 175 in each of the last two games.

Minnesota
Will the offense come to life? The Golden Gophers have scored 13 points in each of the last three games-all losses. Minnesota hasn't scored over 20 since a 28-23 win vs. Western Michigan on Sept. 15. With freshman Philip Nelson likely under center for a second week in a row, growing pains may persist and points could remain scarce.

Nebraska
Can the offense stay on a roll vs. Michigan? The Cornhuskers have the No. 1 total offense in the league (512.4 ypg) and top scoring attack (41.6 ppg). Nebraska may have to try to outscore Michigan if the Husker defense has issues vs. Denard Robinson and the Wolverine offense.

[AP: Abdullah set to take over as Huskers' featured back]

Northwestern
Will the once-prolific offense get going? The attack has struggled recently, notching 262, 275 and 301 yards in the last three games. The Wildcats had 704 vs. Indiana before the three-game funk. The passing game has been the issue, as Northwestern is last in the Big Ten with an average of 172.8 yards passing per game.

Ohio State
Will quarterback Braxton Miller be OK? The star sophomore left the Purdue game late in the third quarter with a neck injury, but later was cleared of anything serious at the hospital. But will he be his usual self at Penn State?

Penn State
Can the offense keep rolling? The Nittany Lion attack has been hot, thanks to the passing of quarterback Matt McGloin. Penn State ranks No. 2 in the Big Ten in passing (257.1 ypg). With defenses having to respect the pass, a middling Nittany Lions ground game could get some room to operate.

Purdue
Which Boilermaker team will show up? The team that was blown out at home by Michigan (44-13) and Wisconsin (38-14)? Or the one that almost won at Ohio State before falling in overtime (29-22)? More consistency is needed down the stretch, beginning this week vs. a desperate Minnesota team.

Wisconsin
Will the Badgers stay hungry? Wisconsin doesn't figure to be challenged by Purdue, Illinois and Indiana in its quest to earn the Leaders Division slot in the Big Ten title game. Will the Badgers keep their edge in the second half of the season? Games vs. Ohio State and at Penn State to end the season may help with that.