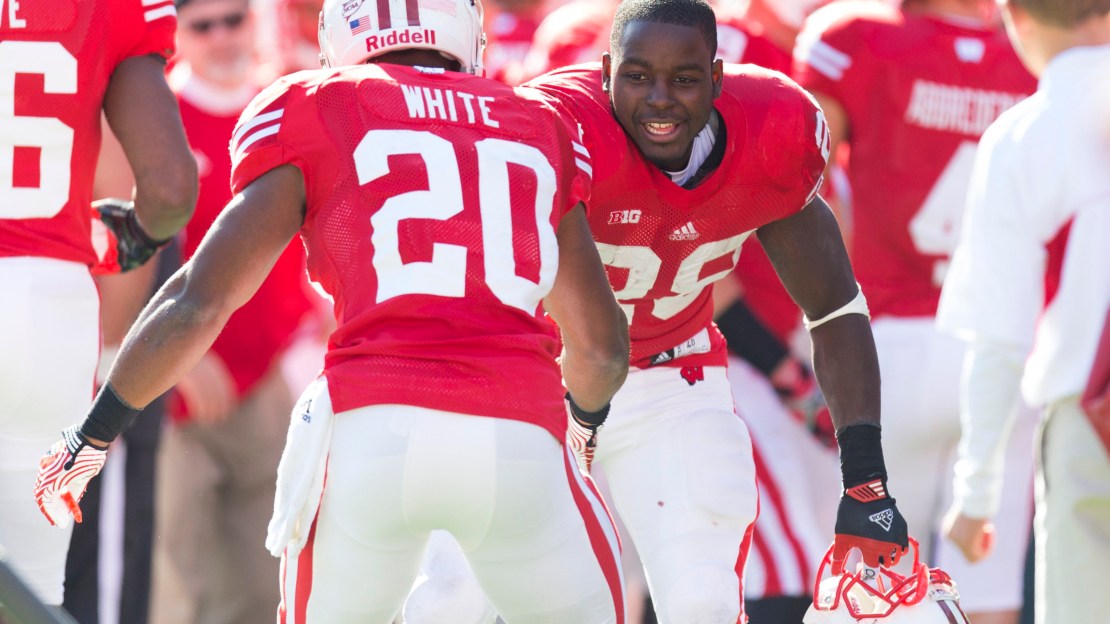 This is the Wisconsin we all expected at the beginning of the season. The last three games, the Badgers have outscored foes 107-41 and outgained them 1,485 yards to 781. Those offensive line troubles are ancient history and the defense has played well all season long. Where do the surging Badgers land on my latest Power Rankings? See my Week 9 Power Rankings in this post.

[RELATED: Where are Big Ten teams ranked in latest polls?]

1. Ohio State (8-0, 4-0). The 29-22 overtime win over Purdue wasn?t pretty-but the team showed toughness and resourcefulness in the face of adversity. Nice qualities. Best of all, the Buckeyes? dreams of an unbeaten season march on-for now. Oh, and Braxton Miller?s injury doesn?t look serious.
Last week: 1
Next week: at Penn State

[AP: Miller fine after being hurt in Buckeyes' win]

2. Michigan (5-2, 3-0). It wasn?t a work of art. In fact, let?s call it ?winning ugly.? That?s the best way to describe the Wolverines? 12-10 victory over Michigan State that ended the Spartans? four-game winning skein over Michigan. The Wolverines are the lone unbeaten in the Legends and control their destiny.
Last week: 2
Next week: at Nebraska

3. Penn State (5-2, 3-0). The amazing story of the 2012 Nittany Lions continues with an utterly dominating 38-14 win at Iowa. That sets up a huge showdown with Ohio State in an ?NCAA Probation Bowl.? Just think how close Penn State is to being unbeaten.
Last week: 3
Next week: Ohio State

4. Wisconsin (6-2, 3-1). The Badgers look to have regained their plough horse form, steamrolling the last three foes with over 900 yards rushing. But give the defense some props, too, as it yielded just 245 in the 38-13 win over Minnesota and has played well all season.
Last week: 5
Next week: Michigan State

5. Nebraska (5-2, 2-1). The 29-28 comeback win at Northwestern was nothing short of amazing. But best of all: It may have saved the Cornhuskers? season by keeping them in the thick of the Legends race. The visit from Michigan is huge.
Last week: 7
Next week: Michigan

6. Northwestern (6-2, 2-2). The defense continues to have issues, especially late in games. First, the Penn State game. Next, the 29-28 meltdown at home vs. Nebraska. The Wildcats? wiggle room is evaporating.
Last week: 4
Next week: Iowa

[RELATED: How did we do? Week 8 picks revisited]

8. Michigan State (4-4, 1-3). The defense continues to do a standout job, limiting Michigan to 326 yards. But the Spartan offense continues to struggle, which is why they are having issues. Le?Veon Bell had just 68 yards rushing on 26 carries vs. Michigan.
Last week: 8
Next week: at Wisconsin

9. Purdue (3-4, 0-3). The Boilermakers showed great fight in that 29-22 overtime loss at Ohio State after suffering two blowout defeats. But facts are facts: Purdue has lost three in a row. It needs to taste victory to get its season back on track.
Last week: 10
Next week: at Minnesota

10. Minnesota (4-3, 0-3). The Golden Gophers have now lost three in a row since that 4-0 start. In the 38-13 loss at Wisconsin, the defense got gashed for 443 yards, while the offense did little behind true freshman quarterback Philip Nelson, who made his first career start.
Last week: 9
Next week: Purdue

11. Indiana (2-5, 0-3). For a third week in a row, the Hoosiers came close to victory. First it was Michigan State, then it was Ohio State, this week it was Navy, 31-30. Those three losses have come by a combined eight points.
Last week: 11
Next week: at Illinois