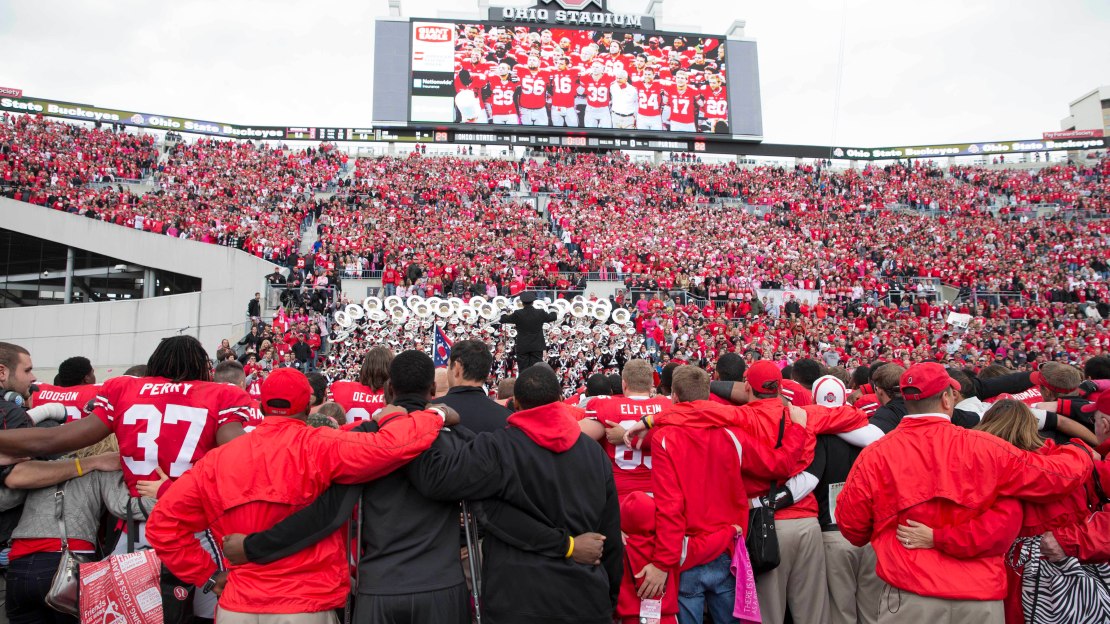 Here is my weekly ?Top 10,? a fun and offbeat look at this past Saturday of action-and beyond.

1. Everyone in the Legends Division is chasing Michigan, a 12-10 winner over Michigan State on Saturday. That moved the Wolverines to 5-2 overall and 3-0 in the Big Ten. With Iowa?s loss, they are the only club in the Legends that is unbeaten in conference action. Nebraska and Iowa each have one loss. Northwestern has two. What?s it mean? The Wolverines are in prime position down the stretch. After going to Nebraska this Saturday, Michigan plays at Minnesota, vs. Northwestern and Iowa at home, and at Ohio State.

2. Is it about time that we start to give some props to the Wisconsin defense? While the offense has had to sort through some issues up front and at quarterback, the defense has been a rock all season. And it just may end up being the reason why Wisconsin wins the Leaders Division and heads to Indianapolis for a second season in a row for the Big Ten title game. Wisconsin is 18th in nation in total defense, allowing an average of 315.6 yards/game. And the Badgers are sixth in the nation in opponent third-down conversions at 27.5 percent.

3. With each passing effort, Montee Ball seems to be regaining his 2011 Heisman finalist form. He has rushed for 541 yards in the last three games and is now No. 3 in the Big Ten in rushing. If the senior keeps it up-and the Badgers keep winning-Ball may become a legit Big Ten MVP candidate and perhaps-PERHAPS–sneak into the Heisman conversation.

4. Who else was looking forward to the Ohio State at Penn State clash back in August? Exactly. No one. Now, the clash of the top two Leaders Division teams this Saturday shapes up as the biggest game of the season that means absolutely nothing. Still, it sure will be fun.

5. With Braxton Miller?s off game vs. Purdue-and subsequent injury that forced him out of action before the fourth quarter–his Heisman hopes took a hit. But, there?s still time for him to get back among the leaders. For now, however, players like Kansas State?s Collin Klein, USC?s Matt Barkley, Oregon?s DeAnthony Thomas and even now Texas Tech?s Seth Doege-among others–seem to be at the top of the pecking order.

[AP: Miller 'fine' after being hurt in Buckeyes' win]

6. The offenses of Iowa and Michigan State continue to struggle. As a result, each can?t seem to get over the proverbial hump. Spartan quarterback Andrew Maxwell and Hawkeye quarterback James Vandenberg rank Nos. 11 and 12, respectively, in passing efficiency in the Big Ten.

7. Taylor Martinez is leading the Big Ten in touchdown passes with 15. It?s true. Look it up. And he?s coming off a sterling effort in the win at Northwestern, throwing for 342 yards and three touchdowns. As long as Martinez is humming along, Nebraska has a shot for big things and perhaps its first league title since 1999.

8. How will Illinois look coming out of an off week? The last time we saw the Fighting Illini, they were getting beat, 45-0, at Michigan. That made it four losses in a row and counting for Illinois, which is struggling on both sides of the ball. Maybe a visit from equally desperate Indiana will be just what the doctor ordered. Maybe not. Illinois has lost nine Big Ten games in a row. The Illini?s last Big Ten win? A 41-20 decision in 2011 over … Indiana.

9. Speaking of Indiana, the Hoosiers have lost the last three games by a combined eight points. Indiana continues to play well on offense. The defense? Let?s just say it has room to improve. As it heads to Illinois this Saturday, Indiana is looking for its first Big Ten win since prevailing at Purdue at the end of the 2010 season. It?s 11 Big Ten losses in a row and counting for the Hoosiers.

10. Is it time to start worrying about bowl hopes for Minnesota, Purdue and Michigan State? The Golden Gophers (4-3) and Boilermakers (3-4) have lost three in row. The Spartans (4-4) have lost two in a row and three of four. It could be a close call for all three.