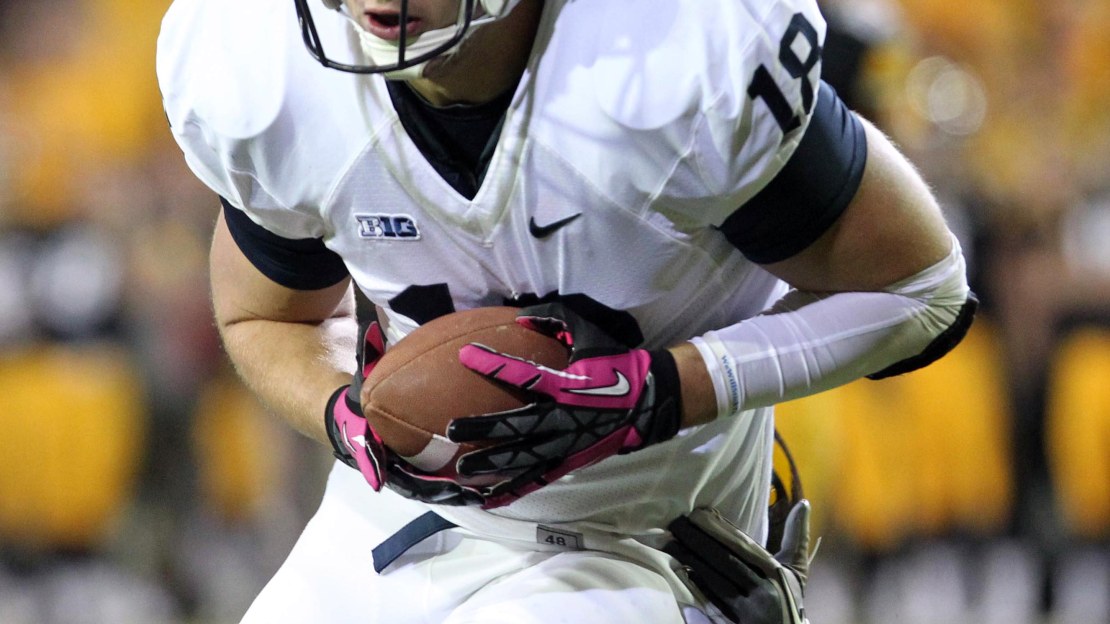 Penn State aired it out to the tune of 132 passing yards in the quarter, and the Nittany Lions lead 14-0 at the end of the first quarter. Penn State got on the scoreboard first, rattling off a nine-play, 84-yard drive that ended in a score when Matt McGloin and Jesse James combined for a 31-yard touchdown.

Penn State opened up the lead, 14-0, after McGloin threw an eight-yard touchdown pass to Allen Robinson to end a nine-play, 69-yard drive.

The Nittany Lions will start the second quarter with the ball at Iowa's 30-yard line.

Iowa's Dominic Alvis had to head to the locker room following this injury:

Player on the spot: Iowa RB Greg Garmon. With Mark Weisman limited or unlikely to play after hurting an ankle last week, Garmon is listed as first team running back. The true freshman has flashed some potential, but can he carry the same load as Weisman against a strong Penn State front seven that ranks No. 6 in the Big Ten against the run (128.5 ypg)? Garmon, who has missed time with an elbow injury, has run 14 times for 35 yards. Weisman has 631 yards rushing and has eclipsed the 100-yard mark in each of the last four games.

Key matchup: Bill O?Brien vs. Iowa defensive coordinator Phil Parker. The Hawkeye defense has played well all season, ranking No. 4 overall in the Big Ten (317.2 ypg) and No. 3 in scoring (17.2 ppg). O?Brien pushes the buttons on what has been a surprisingly effective Nittany Lion offense that ranks No. 6 in the Big Ten (390.2 ypg). The passing game has been the cornerstone, ranking No. 2 in the Big Ten (251.8 ypg). But the ground game still lags, ranking 11th (138.3 ypg). Better balance may be needed to beat this underrated Hawkeye defense.

Key number: 8, sacks yielded by Penn State. That?s a slim total when you consider that the Nittany Lions have attempted 229 passes. That?s an average of just one sack for 38.2 attempts per game. The only Big Ten with a higher average of passing attempts per game is Indiana with 45.3.

Key note: Four of Iowa?s first six games have been decided by three points or less, including two decided by one point each and another in double overtime.