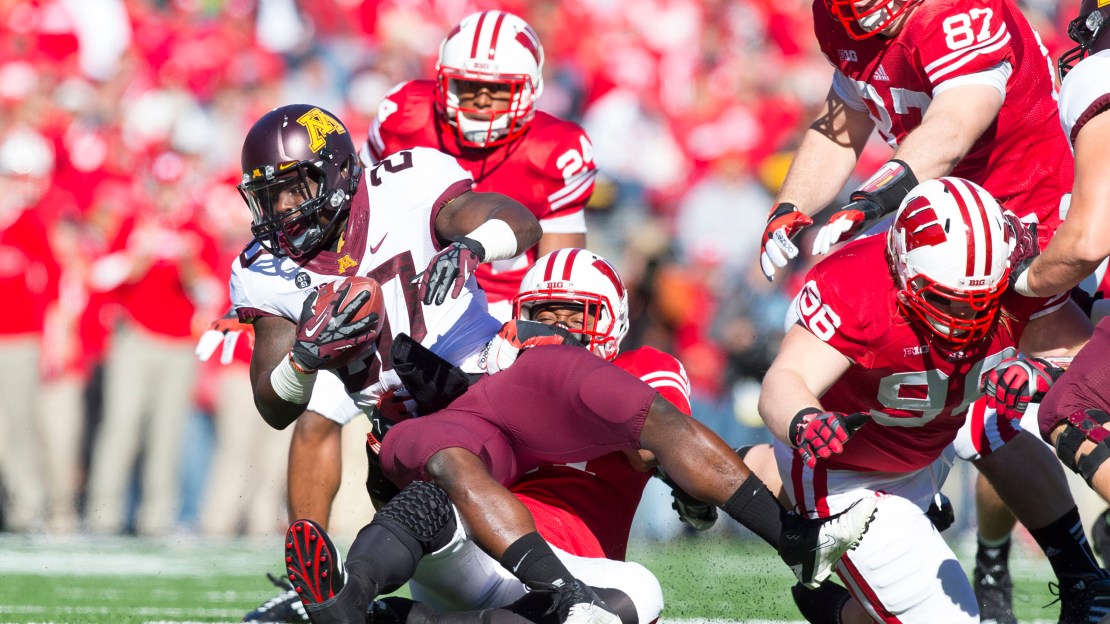 First-time starter Philip Nelson threw for 34 yards and one touchdown and ran for 31 yards in the first quarter, but the Golden Gophers trail 7-6. Wisconsin threw for 87 yards during the quarter. The Badgers took the game's first lead after James White, out of the Wildcat, scored on a 14-yard touchdown on the last play of a three-play, 59-yard drive. Wisconsin used Joel Stave's 42-yard pass to fuel the drive.

Minnesota made the score 7-6 after Nelson and Brandon Green hooked up for a 16-yard touchdown to finish off a 65-yard drive.

The Badgers will start the second quarter with possession on the Golden Gophers' 21-yard line.

Player on the spot: Minnesota QB Max Shortell. He figures to start a third consecutive game, but MarQueis Gray could see some action under center or at receiver as he continues to recover from an ankle injury. Regardless of who takes the snaps, the Gophers need better production to keep pace with a hot Wisconsin attack. Minnesota has scored 17, 13 and 13 points in its last three games.

Key matchup: Minnesota defensive front seven vs. Wisconsin RB Montee Ball. The Golden Gopher defense has had some holes punched in it lately. Last week, Northwestern ran for 208 yards; Iowa had 182 the week before. Add it up, and Minnesota is just No. 8 in the Big Ten in rush defense (150.7 ypg). Ball is starting to heat up, coming off a career-best 247-yard rushing effort at Purdue last week when he became the Big Ten?s all-time leader in touchdowns. Ball had 116 yards rushing the week before vs. Illinois. He is No. 4 in the Big Ten in rushing (116.6 ypg) with a league-high 11 rushing scores. In the Purdue game, Wisconsin ran for 467 yards and finished with 645 yards.

Key number: 8, Wisconsin wins in a row over Minnesota.

Key note: Wisconsin has won 20 consecutive home games dating back to a 20-10 loss to Iowa on Oct. 17, 2009. That is the second-longest active home win streak in the nation, trailing only LSU (21). Wisconsin has won 11 straight Big Ten games at home, the second-longest active home conference win streak in the nation. Only Northern Illinois (14) has a longer active streak of home wins in conference play.