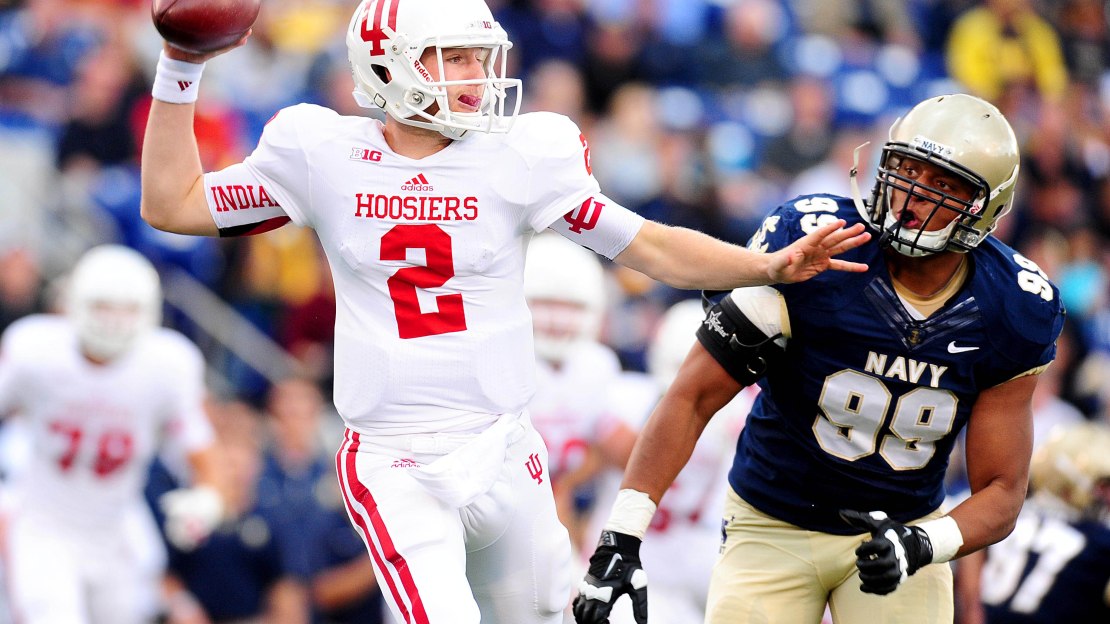 Stephen Houston had a productive quarter for Indiana. He ran for 41 yards and one touchdown, and the Hoosiers lead 10-0 at the end of the first quarter. Indiana struck first when Mitch Ewald kicked a 25-yard field goal, the final play of a 12-play, 67-yard drive.

The Hoosiers added to their advantage when Houston turned a handoff into a one-yard touchdown, the clincher of an eight-play, 50-yard drive to give Indiana the lead, 10-0.

Navy will start the second quarter with the ball at the Hoosiers' 29-yard line.

Player on the spot: Indiana LB David Cooper. He has played well since arriving from a JC, ranking second on the team in tackles with 39. Cooper will need a big game in Annapolis, as he must lead a defensive charge that slows down Navy?s triple-option. The Hoosiers can?t let the Midshipmen control the ball for extended stretches.

Key matchup: Indiana defensive line vs. Navy triple option. The 3-3 Midshipmen rank No. 17 in the nation in rushing (231.7 ypg). They are masters at executing the triple-option. It?s an attack that excels at ball control, too, which is good because Navy doesn?t want the explosive Hoosier offense to get its hands on the ball too often. It?s no secret: The Midshipmen won?t pass the ball (they rank 121st in the nation at 119.5 ypg), so Indiana knows what to focus on stopping. Can it do it?

Key number: 19.5, points per game Navy averages. That ranks 110th in the nation. If Indiana can jet to a lead, it could force the Midshipmen to abandon the comfort of the run game and have to pass. That?s exactly what Indiana must-and can-do.

Key note: Indiana has scored at least 24 points in each game this season, and the Hoosiers have tallied 29 or more four times.