Hoke interview: 'I know our guys will be ready' 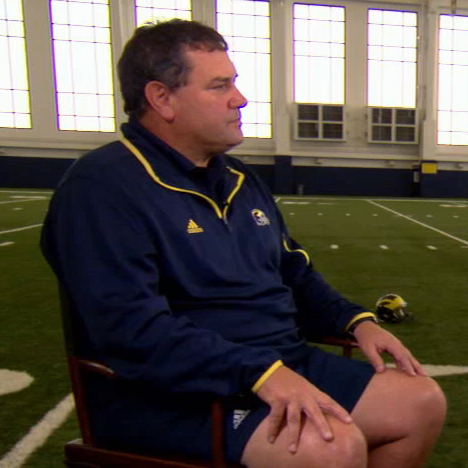 Earlier this week BTN football analyst Glen Mason sat down with Michigan football coach Brady Hoke in advance of today's game against Michigan State (3:30 p.m. ET on BTN/BTN2Go). The feature aired Saturday morning on "The Big Ten Football Pregame Show" presented by Auto-Owners Insurance, and we now present their conversation to you in full online.

We're geared up for this annual rivalry game today and have a few special features for fans of both Michigan and Michigan State. First, be sure to check out our exclusive BTN Field Pass camera, which goes live at 2:30 p.m. ET on BTN2Go. You'll be able to see both teams warming up at Michigan Stadium.

Listen to Hoke's portion of the call below.

Listen to Dantonio's portion of the call here:

And maybe you can't wait for today's kickoff. Why not spend a little time watching any of these four previous Michigan-Michigan state games from the season of 1990, 1995, 2004, 2007 on BTN2Go.

Michigan linebacker Jake Ryan talked to #BTNLive" on Tuesday after Ryan was named the Big Ten's Defensive Player of the Week for his performance against Illinois. Ryan was asked about the rivalry with Michigan State. "It's huge," Ryan said. "It's the state championship for Michigan. It's huge for us. We've been talking about it all week."

Watch the video below.