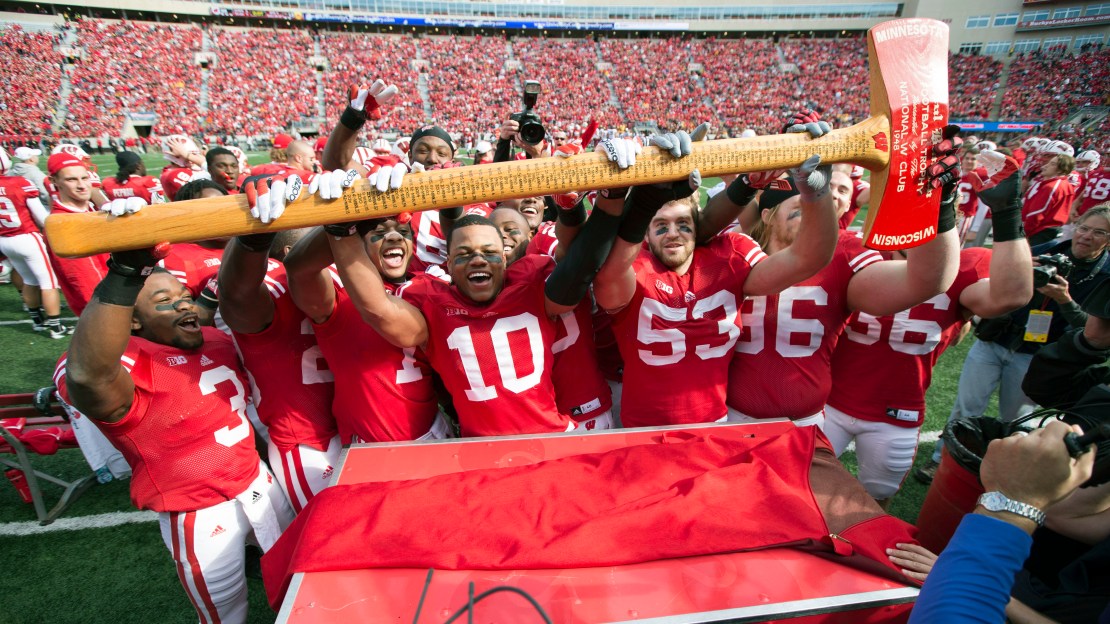 James White raced 15 times through Minnesota's defense for 175 yards rushing and three touchdowns, carrying Wisconsin to a 38-13 victory over Minnesota on Saturday, the ninth straight time the Badgers have beaten the Gophers to keep Paul Bunyan's Axe.

Montee Ball let his partner steal the show for most of the afternoon but still muscled his way for 166 yards on 24 attempts and two fourth-quarter scores to put the game out of reach and push the Badgers (6-2, 3-1 Big Ten) to their 21st win in a row at Camp Randall Stadium. That matches LSU for the longest current streak in major college football.

Freshman Philip Nelson was the surprise starting quarterback for the Gophers (4-3, 0-3). He threw two touchdown passes, but the Badgers turned one interception into a third-quarter field goal. Three plays after the second pick, Ball scored his second touchdown.

FINAL: James White put the team on his back in Wisconsin's 38-13 win over Minnesota on Saturday at Camp Randall Stadium, rushing for 175 rushing yards and three touchdowns. The Badgers' ran away with things in the fourth quarter. Wisconsin scored 14 points in the quarter to turn a 11-point margin into a 25-point blowout.

The Badgers' offense dominated, ripping off huge chunks of yardage. Wisconsin burned the Golden Gophers' defense for six plays of more than 20 yards. With 5:30 to go in the third quarter, White ran 48 yards to paydirt, the Badgers' longest play on the day. The touchdown gave Wisconsin a 24-6 lead.

Minnesota's Philip Nelson passed for 149 yards, completing 13 of 24 throws. He tossed two touchdowns and two interceptions. Nelson was also a threat on the ground, as he rushed for 68 yards on 16 attempts.

The Golden Gophers' offense finished the game having gained 247 yards. Along with Nelson's stats in the passing game, Minnesota posted just 98 yards rushing on 30 attempts.