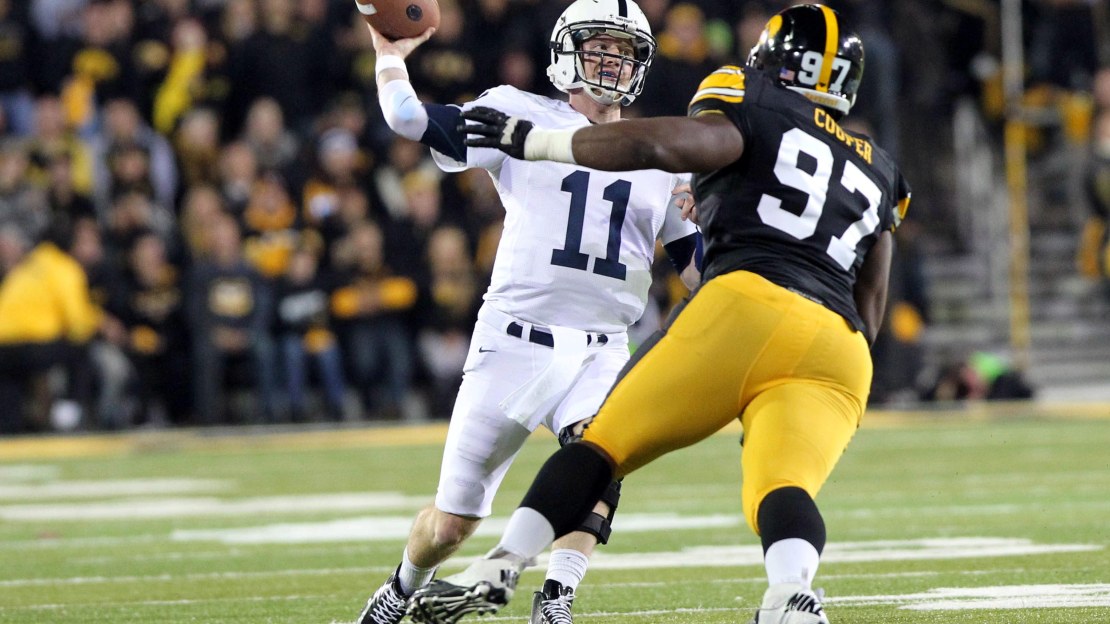 Bill Belton ran for 103 yards and three touchdowns and surging Penn State throttled Iowa 38-14 on Saturday night for its fifth straight win. Matt McGloin threw for 289 yards and a pair of TDs for the Nittany Lions, who beat the Hawkeyes in Iowa City for the first time in 13 years.

Penn State (5-2, 3-0) took the suspense of this matchup between previously-unbeaten Big Ten teams by storming out to a 24-0 lead at halftime. The Nittany Lions scored again just 27 seconds into the second half to go ahead 31-0.

James Vandenberg threw for 189 yards for Iowa (4-3, 2-1). The Hawkeyes were held to just 209 yards of offense and tacked on a pair of late touchdowns that made the final score seem much closer than the game ever really was.

FINAL: Bill Belton broke out against Iowa, piling up 103 rushing yards and scoring three touchdowns to lead Penn State to a 38-14 victory on Saturday at Kinnick Stadium. The Nittany Lions racked up the yards against the Hawkeyes on their way to victory. Penn State's offense exploded for 291 passing yards and 212 rushing yards in claiming the victory.

Home run plays keyed the Nittany Lions' scoring attack. Iowa's defense gave up four plays of at least 20 yards. With 14:50 to go in the third quarter, Matt McGloin found Brandon Moseby-Felder open for a 42-yard pass, Penn State's biggest gain of the game. Later in the drive, Belton ran three yards to paydirt, which gave the Nittany Lions a 31-0 lead.

James Vandenberg threw for 191 yards while completing 17 of 36 passes for the Hawkeyes. Vandenberg finished the game with one touchdown and two interceptions. Vandenberg looked for C.J. Fiedorowicz often. He hauled in five catches for 36 yards.

Iowa racked up 213 total yards. The Hawkeyes' rushing attack only managed to contribute 22 yards on 23 carries in addition to Vandenberg's passing effort.

McGloin threw for 291 yards while going 26-38 for Penn State. He threw two touchdowns and no interceptions. McGloin also ran for 24 yards on five attempts. McGloin had a good connection with receiver Allen Robinson. He caught six passes for 39 yards and one touchdown.