Miller goes down, Guiton sends OSU past Purdue in OT 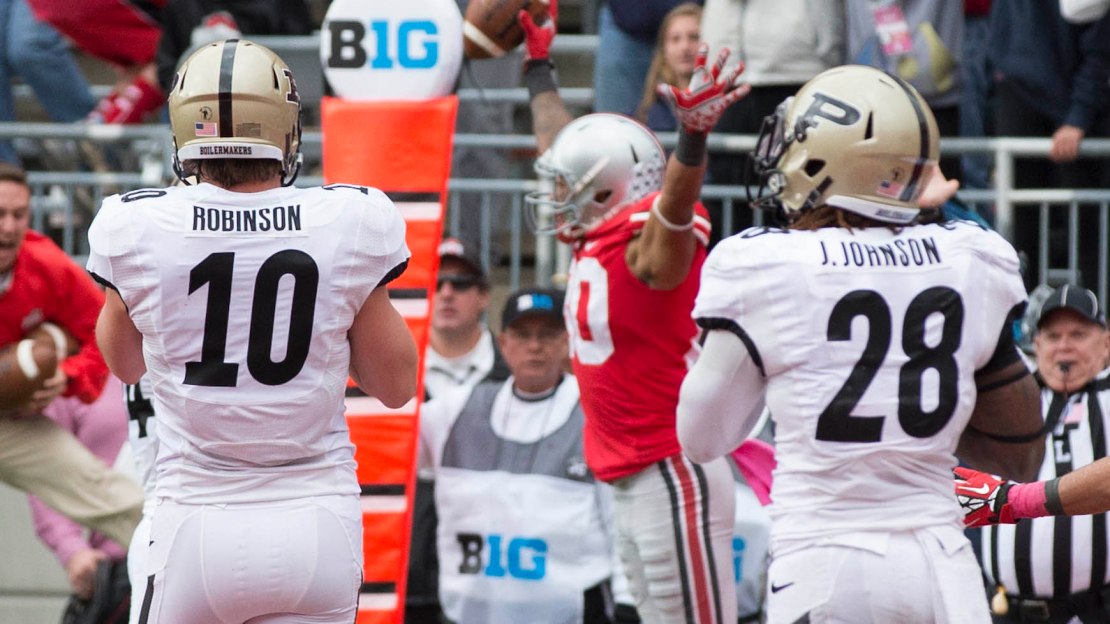 Kenny Guiton came off the bench in relief of injured star quarterback Braxton Miller to lead touchdown drives in the final minute of regulation and in overtime, with Carlos Hyde scoring on a 1-yard run to clinch No. 7 Ohio State's 29-22 victory over Purdue on Saturday.

[AP: Miller 'fine' after being hurt in Buckeyes' win]

Purdue (3-4, 0-3 Big Ten) led 22-14 when Ohio State got the ball with just 47 seconds left in regulation. Guiton, inserted when Miller went out with an undisclosed injury late in the third quarter, hit Chris Fields on a 2-yard touchdown pass with 3 seconds remaining. Guiton then found freshman Jeff Heuerman on the conversion pass to tie it at 22.

Hyde scored on a short plunge for Ohio State (8-0, 4-0) before Purdue's Caleb TerBush, who had two TD passes, misfired on four passes in OT.

FINAL: No. 7 Ohio State needed extra time to beat Purdue as it beat the Boilermakers 29-22 in one overtimes on Saturday at Ohio Stadium. After the Buckeyes scored on Carlos Hyde's one-yard touchdown run to open the first overtime, Purdue failed to score, getting stopped at the 20 on fourth-and-5.

The Boilermakers' defense forced the issue, causing four turnovers by Ohio State's offense. The Buckeyes' offense gained 342 total yards though, and was able to score enough for the win.

Home run plays keyed Ohio State's scoring attack. Purdue's defense gave up four plays of at least 20 yards. The Buckeyes added to the highlight reel when Kenny Guiton found Devin Smith open for a 39-yard pass with 47 seconds left in the fourth quarter. The big play set up a 10-play drive that cut the Boilermakers' lead to 22-20 after Guiton found Chris Fields open for a two-yard touchdown pass.

Braxton Miller threw for 113 yards while going 9-20 for Ohio State. He threw one interception. Miller also ran for 47 yards and one touchdown on 12 attempts.

Purdue's Caleb TerBush was good for 232 yards during the game, completing 19 of 30 passes. TerBush tossed two touchdowns and one interception. TerBush had a good connection with receiver Dolapo Macarthy. He hauled in six catches for 49 yards.