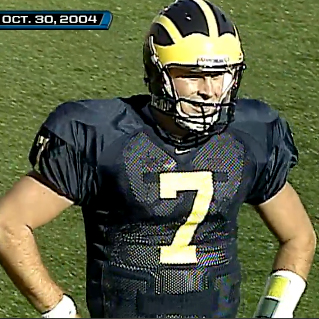 The latest football game between Michigan and Michigan State airs live Saturday on BTN/BTN2Go at 3:30 p.m. and you can catch Glen Mason's full interview with Brady Hoke at 11 a.m. ET on our Saturday pregame show. But you don't have to wait to watch a few classics between these two Big Ten rivals right here and right now.

Watch previous battles between the Wolverines and the Spartans from 1990, 1995, 2004, 2007 on BTN2Go. We've got other great games from earlier versions of this Saturday's Week 8 matchups on BTN2Go, too. Scroll down for earlier games between Ohio State and Purdue, Wisconsin and Minnesota, and Penn State and Iowa.

BTN2Go is a digital extension of BTN that delivers live and on-demand programming to existing BTN subscribers via the web, mobile phone and tablet. It's available for free to subscribers of participating TV providers. You can use it at BTN2Go.com or …

2004 Michigan State at Michigan | Watch on BTN2Go
Chad Henne connected with Braylon Edwards for two fourth-quarter touchdowns as the Wolverines stormed back from a 17-point deficit to force overtime against the Spartans.

1990 Michigan State at Michigan | Watch on BTN2Go
The Wolverines were ranked No. 1 heading into this match-up, but it would be a close game heading into the final minutes.

2007 Michigan at Michigan State | Watch on BTN2Go
Chad Henne throws for a school record four touchdowns as Michigan tries to rally past the Spartans.

2005 Wisconsin at Minnesota | Watch on BTN2Go
Minnesota?s Laurence Maroney gained 258 yards and 1TD on 43 carries as the Badgers and Gophers battled towards a wild finish.

2000 Ohio State at Purdue | Watch on BTN2Go
Purdue's Drew Brees rallied his team for 21 points in the fourth quarter in a comeback victory over the Buckeyes.

2002 Ohio State at Purdue | Watch on BTN2Go
The Buckeyes continued their undefeated title run with a late-game victory over Purdue.