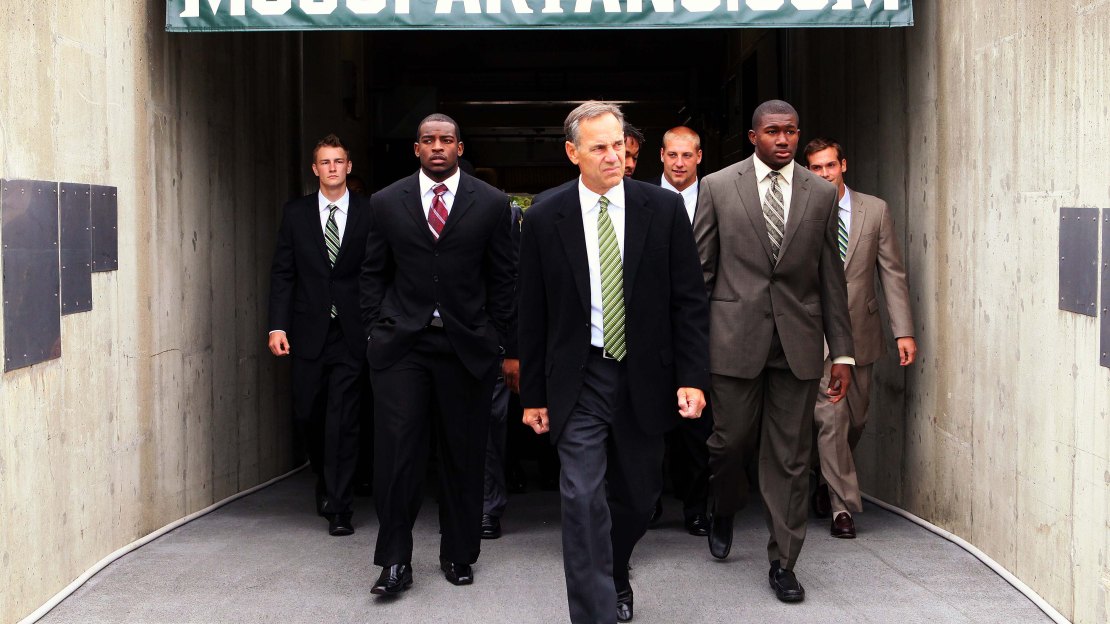 A week or so ago, it would have been crazy to entertain such a topic. But with a 4-3 record and a grueling slate of games remaining, will Michigan State get bowl eligible? It's a fair question, especially when one takes a look at the team's final six games: at Michigan, at Wisconsin, Nebraska, Northwestern and at Minnesota.

To be bowl eligible, the Spartans, who play at Michigan at 3:30 p.m. ET Saturday on BTN/BTN2Go, must finish 2-4. Will they get those two wins? BTN.com's Tom Dienhart and Brent Yarina debate it.

[RELATED: Big Ten Field Pass will be live from the Big House at 2:30 p.m. ET Saturday]

Before we get started, here's what Michigan State has done and what it has ahead of itself:

Tom: I can?t believe that I?m about to type these words. But, here it goes: I don?t think Michigan State will get to the six wins needed for bowl eligibility. That double-overtime home loss last week to Iowa was a killer-and unexpected in my book.

Tom: Have you see Michigan State play this year? The offense remains a study in dysfunction. Even the Spartans? wins this season almost have been losses. Boise State, Eastern Michigan and Indiana ALL nearly beat Michigan State. The only convincing victory was at Central Michigan.

Brent: I have, and the Spartans haven?t been very impressive. But, as we all know, Mark Dantonio has a ton of talent. Enough talent, I?d say, to win two of the remaining five games. It?s a tough schedule, for sure, but you don?t see two wins in there?

Tom: I like their chances in a season-ending trip to Minnesota. But the other four games? I?m not so sure, Brent. This is talented team. But confidence matters. And, I just don?t see it. Even if Michigan State gets to 6-6, I wonder how much it will want to play in a bowl. Going to the Little Caesar?s Bowl to play a MAC team would be a HUGE let down.

Brent: I?ll give you that the next four games are VERY tough. Even the two home games, vs. Nebraska and Northwestern, aren?t easy wins. But let?s not forget Michigan State has won four in a row against Michigan, this week?s opponent, including two at The Big House. The Spartans have Denard?s number, as well, so it isn?t crazy to think that they?ll only need one win in their final four after this week.

Tom: Good points. But this is an offense that just doesn?t look like it?s going to come to life. The receiving corps is what it is: average, at best. The line is banged up and inconsistent. Andrew Maxwell wasn?t as far along as we thought he?d be. The only aspect of the offense that has delivered is running back Le?Veon Bell. And he only can do so much. Plus, I think the offensive struggles impact the defense, which feels it must carry too big of a load.

Brent: Very true. Here's a surprising stat: Maxwell leads the Big Ten in passing yards (1607), albeit it on 35 more attempts than his closest competitor, Matt McGloin. You?re right, though, the offense is a mess. Even Le'Veon Bell, the stud of the group, is averaging a meager 3.7 yards per carry in Big Ten play. Still, I have enough faith in this defense that it won?t allow Michigan State to drop five of its last six, counting the Iowa loss.

Tom: You may be correct, but I have my doubts. After seven games, there are no unknowns or secrets about Michigan State. This is an average team and the biggest disappointment in the Big Ten. And it will be home for holidays. Hey, at least hoops season is near.

Brent: That is bold, my friend! But I have to ask: Why is Michigan State listed in your latest bowl projections then?

Tom: Yes, I do have Michigan State in my latest bowl projections. Those projections are based on right now. I think by the time we get to the end of the season, the Spartans won?t be there. For now, I am giving Michigan State the benefit of the doubt in my bowl projections–just as I am with Purdue and Minnesota, which I think may be in peril of missing the postseason, too.

@BTNBrentYarina if they win 2 more games I think they will get a bowl game! #obviousanswer

@BTNBrentYarina Only the Weedeater Bowl or Pizza Bowl likely.