Big Ten links: Another Wrigley game would be fun 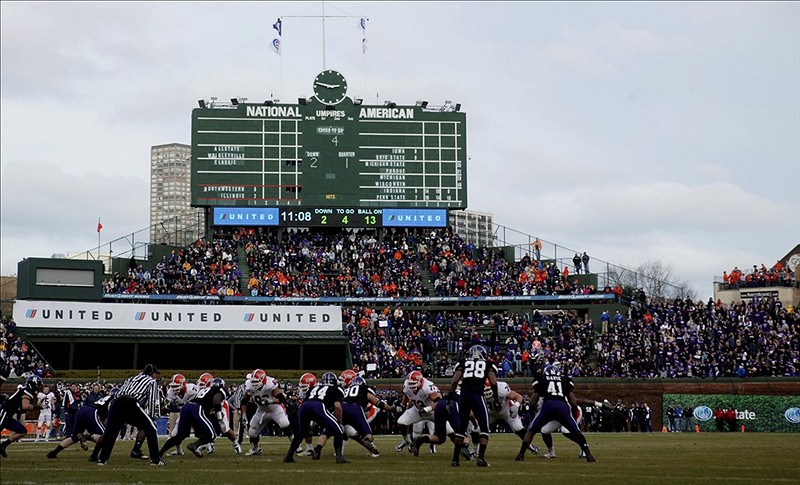 Nebraska plays at Northwestern this Saturday in Evanston, but that venue could change in the future. Why? Money. A lot of people could make a lot of it if Nebraska played Northwestern in venerable Wrigley Field. And, it could happen, according to Tom Shatel of the Omaha World-Herald.

Shatel cites a source at TD Ameritrade, who says the idea of playing the 2014 Nebraska-Northwestern game at Wrigley is being kicked around by Ameritrade officials and Cubs chairman Tom Ricketts, an Omaha, Neb., native and son of Ameritrade founder Joe Ricketts. A source in the Nebraska athletic department said officials also are talking about Wrigley Field, though nothing has been discussed with Northwestern athletic officials yet.

Shatel goes on to quote Nebraska A.D. Tom Osborne: ?There have been no discussions (with Northwestern). As of right now, we?re just talking about possibilities. We?ve also talked about playing Northern Illinois in Chicago (at Soldier Field).?

Stay tuned. This could be fun.

Schedule moves: Chip Scoggins of the Minneapolis Star-Tribune has a good point when he opines that Minnesota shouldn?t be paying $800,000 to avoid playing a so-so foe in these times of tight budgets. But that?s exactly what Minnesota is doing to not pay two games against North Carolina in 2013-14.

"It's a tough decision. It's one that we feel like is part of our plan for building a program. It's one where Coach Kill feels like that playing in the Big Ten is hard enough. We have a young program, and we want our guys to have games in which they can build confidence and do some things rather than playing a BCS program that's pretty good right now. So it's kind of part of the overall plan."

Minnesota announced two future opponents, adding Kent State to its 2015 schedule and South Dakota State in 2019.
On the subject of the Gophers, they have seen their defense ripped by Iowa?s Mark Weisman and Northwestern?s Venric Mark in the two Big Ten games played thus far. How will the Golden Gophers hold up against suddenly hot Montee Ball this Saturday?

Stay the course: Yes, new Wisconsin offensive coordinator Matt Canada could have panicked. He could have freaked out when the Badger offense was struggling back in September. But he didn?t. Nope. Canada stuck with his plan. Now, look at the Wisconsin attack.

Improved line play has been a key cog in the offensive turnaround, as was inserting Joel Stave at quarterback. After averaging 16.3 points in its first three games, Wisconsin has averaged 33.2 over the last four.

According to Tom Mulhern of the Wisconsin State Journal, the new-found rushing success that saw Montee Ball run for 247 yards last week at Purdue has made Canada's play calling easier, especially play-action. Wisconsin?s first touchdown came on a play-action bootleg when, Purdue linebacker Will Lucas let his eyes drift to Stave and tight end Jacob Pedersen was left alone after faking a block.

Gap prevention: The Ohio State defense is struggling. It?s no secret. The Buckeyes allowed 49 points last week at Indiana and 38 the week before vs. Nebraska. Still, the Buckeyes are 7-0 in spite of the struggles. And defensive coordinator Luke Fickell just got a vote of confidence from Urban Meyer even though Ohio State is No. 10 in the Big Ten in total defense (400.0 ypg), last in pass defense (277.7 ypg) and No. 8 in scoring defense (24.6 ppg).

Says Meyer in a story written by Bob Hunter of the Columbus Dispatch: ?I think my job is to support our staff, support our players. The one thing, the overall theme of our team is four to six seconds, and I can coach that really well. We?re going to demand four to six seconds of relentless pursuit and effort. If you don?t, I?ll be involved in that.
?But calling defenses, I?ll give my ideas, but ? that would be a mistake for me to come in. We have very good coaches, very good coaches.?

What if … ? Speaking of Ohio State ? don?t you wonder where the unbeaten Buckeyes would rank in the BCS standings if they were eligible to be included? Doug Lesmerises of the Cleveland Plain Dealer takes a look.

Mo-ti-va-tion: It?s not like Michigan needs incentive to beat Michigan State. After all, the Spartans have dumped the Wolverines four times in a row. But, if any Michigan player needs any extra juice, there?s a quote from Michigan State coach Mark Dantonio that hangs in the Wolverines weight room.

Here is what Michigan quarterback Denard Robinson had to say about it during a recent interview on Sirius-XM Sports: ?He said that he's got some roots in Ohio, and he's going to continue to beat us because he hates the University of Michigan. We take that to heart, and we put that in our weight room.

"We accept that challenge. Every time we go in the weight room, we look at that. And it's in green and white, and we don't like those colors at all."

Nittany numbers: The great Bob Flounders of the Harrisburg Patriot-News has some nice numbers to digest. The key number to me: 12. That?s how many turnovers the Nittany Lions have generated. Penn State paces the Big Ten in turnover margin (1.17). Yes, that?s a big reason why the Nittany Lions are 4-2 and one of the Big Ten?s big surprises.

Off-week duties: According to Mark Tupper of the Decatur Herald-Review, Illinois coach Tim Beckman has a long to-do list during this off week. Hey, I?m not gonna disagree with any of this. But Herb Gould of the Chicago Sun-Times does Tupper one better. Gould thinks the collapse of the Illini has shortened Beckman?s grace period.

My take: How good is this guy gonna be in a few years?

My take: The defensive struggles miff me. Is there not talent at Ohio State? Aren?t there nine starters back from last year?s defense? Injuries haven?t been THAT much of a factor.

My take: Immovable object, meet irresistible force. Or something like that.

Hope: "There have been some bright spots throughout course of the season. The last two weeks, though, certainly have dampened that some."

My take: I?ll file this quote in the ?understatement? category.