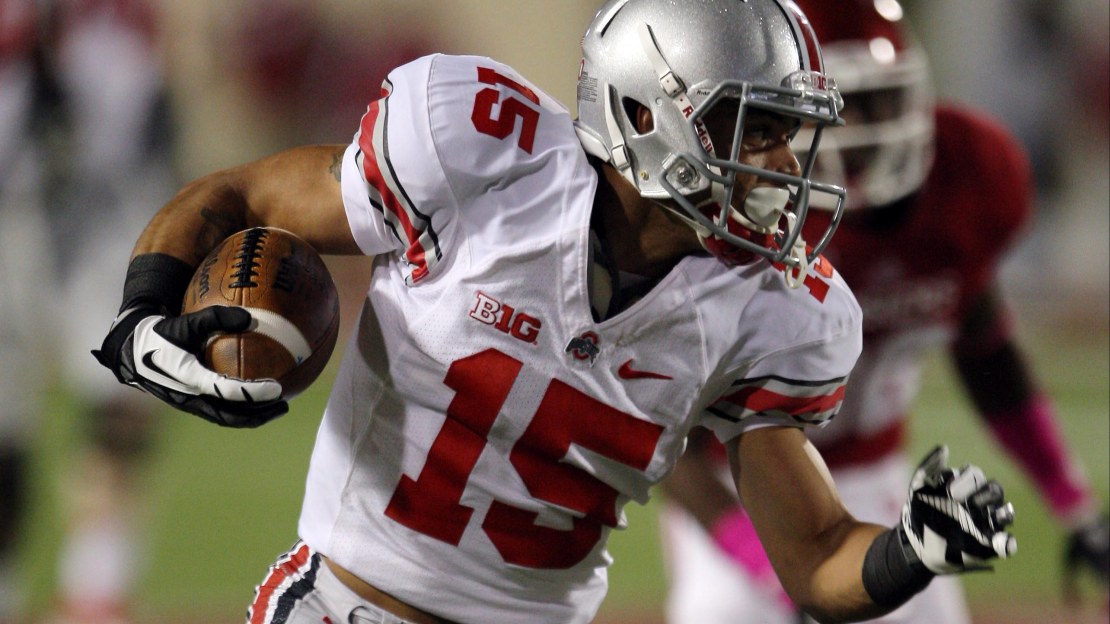 Braxton Miller scored on a 67-yard touchdown run, threw TD passes of 60 and 46 yards and produced his third straight 100-yard rushing game, helping No. 8 Ohio State escape with a 52-49 win at Indiana on Saturday night. The victory makes the Buckeyes (7-0, 3-0 Big Ten) the first ranked team with seven wins.

Indiana (2-4, 0-3) has now lost 21 straight conference games to teams from outside the state and 18 straight to the Buckeyes since 1988, including the game Ohio State won two years ago but later vacated as part of an NCAA penalty.

[RELATED: Did You See This? Ohio State pumpkin helmets]

But Miller had all the answers – scoring on his 67-yard run on the next offensive play after Indiana trimmed the deficit to 24-17, leading the Buckeyes on back-to-back drives of 75 and 78 drives and throwing a 46-yard TD pass to break open the game late.

FINAL: Braxton Miller put the team on his back in No. 8 Ohio State's 52-49 win over Indiana on Saturday at Memorial Stadium, rushing for 149 rushing yards and one touchdown and throwing for 211 yards and two touchdowns.

Stephen Houston was a bright spot in defeat for the Hoosiers, as he rushed for 91 yards on 11 carries and scored two touchdowns.

The game was a shootout, with the offensive units for both teams putting up big numbers. The Buckeyes and Indiana rode their powerful offenses to a combined 1059 total yards.

The Hoosiers were hard pressed to slow Ohio State's ball carriers. The Buckeyes used their running game to great effect, as they picked up 353 yards on the ground. Carlos Hyde led Ohio State's ground attack with 156 yards on 22 attempts.

Indiana's Cameron Coffman went 22 of 44 through the air for a total of 275 yards. Coffman finished the game with one touchdown and no interceptions. Coffman's favorite target on the day was Cody Latimer. He hauled in seven catches for 68 yards.

The Hoosiers' offense finished the game having gained 481 yards, including 352 passing yards on 28 completions. Rushing was a key ingredient in Indiana's offensive mix, bringing it 129 yards on 24 carries.

Miller threw for 211 yards while completing 13 of 24 passes for the Buckeyes. Miller tossed two touchdowns and one interception. Corey Brown was a key target for Miller. He hauled in six catches for 51 yards.