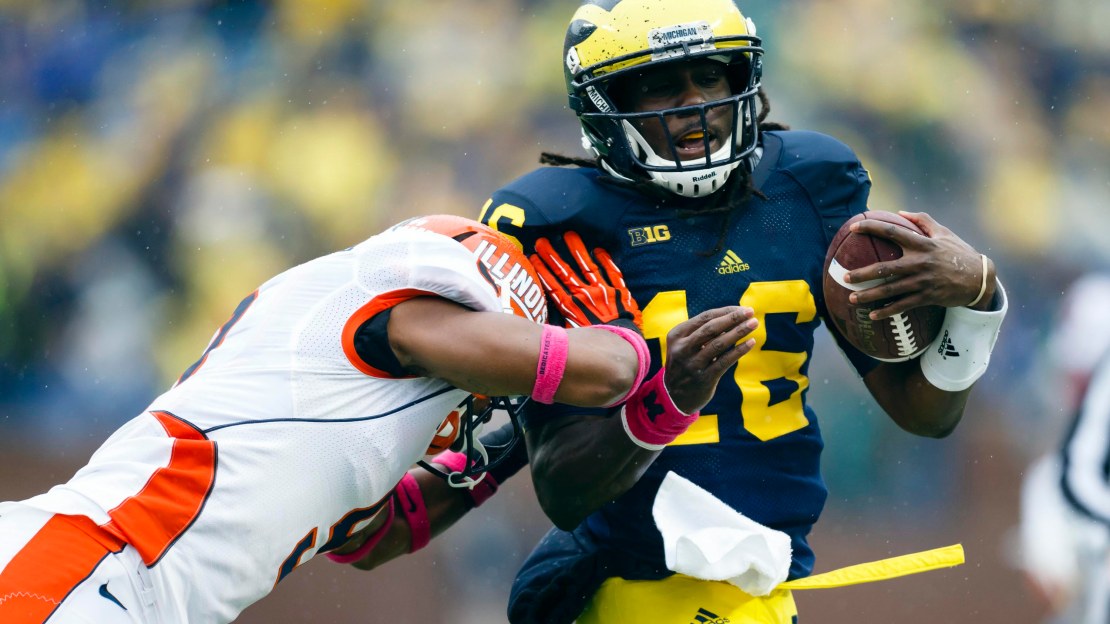 Denard Robinson threw two touchdown passes and ran for two scores, leading No. 25 Michigan in a 45-0 win over Illinois on Saturday. The Wolverines (4-2, 2-0 Big Ten) got a scare when Robinson left the game with an undisclosed injury late in the first quarter. He missed just one-plus possessions, though, and returned to score on a 6-yard run to put Michigan up 17-0 late in the first half.

Robinson, who wouldn't elaborate on the injury after the game, ran for a 49-yard score – giving him 10,000-plus career yards of offense – on the Wolverines' first drive of the second half and tossed an 8-yard TD pass to Devin Funchess on their next possession to make it 31-0.

The Fighting Illini (2-5, 0-3) lost their starting quarterback, Nathan Scheelhaase, because of an undisclosed injury in the second quarter.

Robinson was 7 of 11 for 159 yards with two TD passes, including one on his first drive to Jeremy Gallon, who turned a short toss into a 71-yard score. He ran 11 times for 128 yards, his 18th career 100-yard game on the ground, and scored on a juke-filled, 49-yard run along with a 6-yard run on a play designed to be a pass.

RECAP: Denard Robinson broke out against Illinois, piling up 128 rushing yards and scoring two touchdowns to lead Michigan to a 45-0 victory on Saturday at Michigan Stadium. The Wolverines' explosive offense used big plays to take down the Fighting Illini. Michigan had six plays of 20 yards or more on its way to victory.

With 9:10 to go in the first quarter, Robinson threw a 71-yard touchdown pass to Jeremy Gallon, the Wolverines' longest play on the day. The score gave Michigan a 7-0 lead.

The Wolverines' Robinson went seven of 11 through the air for a total of 159 yards. Robinson finished the game with two touchdowns and no interceptions.