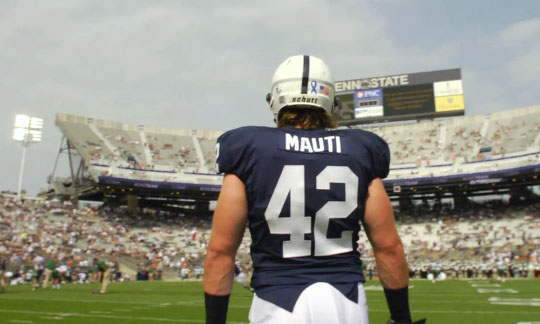 Is there a conspiracy theory as to why Penn State linebacker Michael Mauti was snubbed by the Lombardi Award in the quarterfinal round of balloting? Or maybe it wasn?t a snub. Maybe it was just plain, good old incompetence. David Jones of the Harrisburg Patriot-News explores as only David Jones can. That's one of the many Big Ten Links I present to you on this wonderful Friday.

On the topic of Mauti's snub, here's one thought offered by Jones: The award doesn?t want to be associated with the ?supposedly soiled brand of Penn State.? I have a Lombardi vote. And I have Mauti on my list. I love the guy and his style of play. And here's the Top 25 listed on the Lombardi Award website.

Mr. Fix It: Indiana?s defense remains a work in progress. No shock there, as the Hoosiers have struggled on that side of the ball for years. Coach Kevin Wilson knew it would take time to build even an average unit. In the interim, that?s why Wilson is trying to build a prolific offense that can outscore foes. At least that?s the idea in theory.

Chow time: Urban Meyer has brought a tradition with him from his coaching days at Florida. It?s called ?Victory Meal.? And it takes place on Sunday nights, giving players and the staff a chance to savor a win. There have been six such meals-and counting-for the Buckeyes in 2012.

What a delicious idea. Sorry.

Each was in all of their glory last week vs. Illinois, when each notched at least 10 tackles. This is a speedy trio with underrated athletic ability. It?s also a smart group with a high football IQ.

Three & out: On the subject of the Badgers, it?s no secret the offense has struggled. And that struggle may be most evident in a horrid third-down conversion rate. Before reading this, Bucky, sit down.

According to Jeff Potrykus of the Milwaukee Journal-Sentinel, the Badgers enter the game at Purdue last in the league and 117th nationally out of 120 with a conversion rate of 28.2 percent. In only one season since 1981 did Wisconsin finish below the 30 percent mark. That occurred in 1988, Don Morton's second of three seasons as head coach, when the Badgers finished at 27.9 percent. The program average since 1981 is 41.7 percent. The average from 2006 through last season, when Paul Chryst was the sole offensive coordinator, was 46.2 percent.

Great story: Looking for inspiration and a never-say-die attitude? Read this piece on Iowa defensive lineman Louis Trinca-Pasat. He almost left the team last December but is now a starter and key cog for a Hawkeyes front that was a big question entering 2012 but is playing well.

Dual threats? If Minnesota quarterback MarQueis Gray is healthy, he could be used like Tim Tebow this week vs. Northwestern.

Why not? The 6-4, 250-pounf Gray is built along the same lines as the former Florida quarterback and Heisman winner. Both are big, physical runners who excel is a spread/zone-read scheme. It looks like Gray may play this Saturday, perhaps being spotted in for 15 or so plays like the New York Jets do with Tebow.

No-motion offense: According to the great Loren Tate of the Champaign News-Gazette, Illinois is running in place.

Hard to argue with him. Pick an area, and it?s a problem. The struggling ground game is one of the biggest issues. The root of the problem begins up front with a line that has struggled all season.

Flashback: On the subject of struggles, those of the Nebraska defense are well-documented, having been ripped for 653 yards at UCLA and for 63 points at Ohio State. Now, the real question: Will the defense respond like it did in 2011 and finish strong? Or, will it go in the tank like it did in 2007? Dirk Chatelain of the Omaha World-Herald examines in a little game he calls ?Name That Season.?

The Penn State defense coordinated by Ted Roof has been a nice surprise. But, few envisioned it playing as well as it has. Greg Pickel of PennLive.com takes a position-by-position look at the unit?s expectations in the spring and where it is now.

The most surprising group has been the defensive backs. Credit secondary coach John Butler. I?m beginning to wonder what the ceiling for wins will be for this team. Seven? Eight?

Me? I like Tim Biakabutuka?s 313-yard rushing effort vs. Ohio State in 1995. Heck, I like any excuse to say ?Biakabutuka? but no so much when I have to type it.

Amazing what that 72-yd run by Brax Miller did to the #Huskers DL last Saturday vs OSU. Completely stripped away the edge/aggressiveness

My take: That?s what big plays often do to defenses–especially to defenses that are struggling.

Bret Bielema: "We try to take care of business in September and October to get to November."

My take: Don?t you get the feeling the Badgers are gonna be right there in the thick of the title hunt in November? I sure do.

Meyer on intimidating road venues he's experienced: "LSU is the one where you better bring your man card and your wallet."

My take: This gem from Urban Meyer is in the running for ?Quote of the Year.?