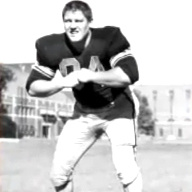 Former Iowa Hawkeye defensive lineman and first-round NFL draft pick Alex Karras died Wednesday morning at the age of 77. Karras had recently suffered from kidney failure. While at Iowa, Karras finished in the top three in Heisman voting as a defensive tackle in 1957 and also won the Outland Trophy as the nation's top lineman.

The native of Gary, Ind. was ranked No. 33 on the BTN's list of "Big Ten Icons" several seasons ago. There's a good photo gallery and obituary at the www.desmoinesregister.com. Karras was also an actor in TV and films, and you can find his complete list of work at IMDB.com.