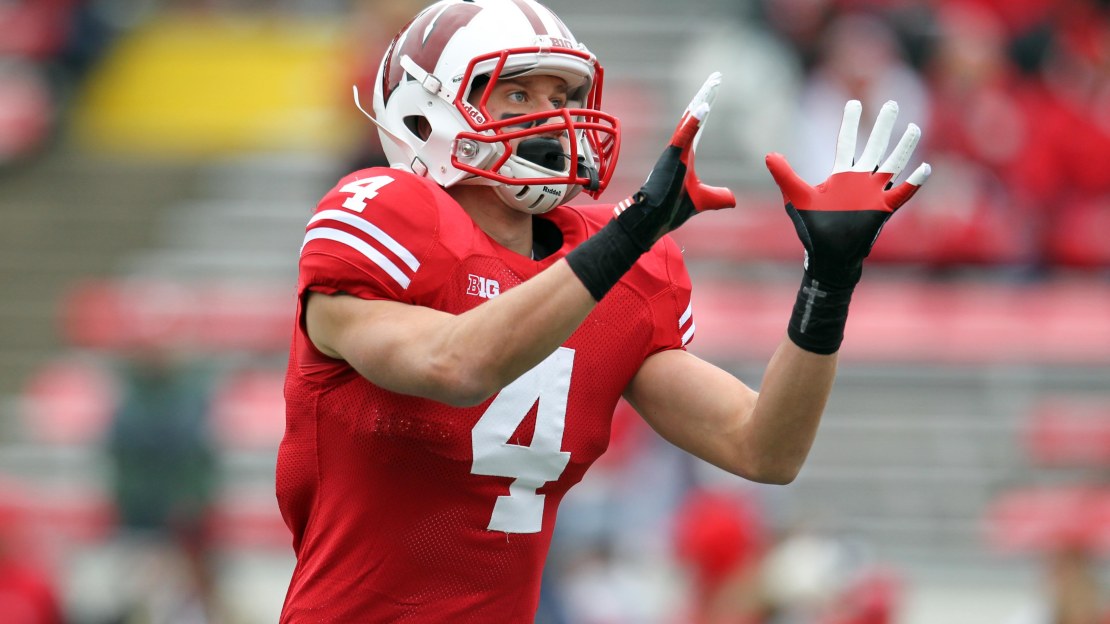 The Wisconsin offense has had its ups and downs this season. It?s no secret. Wideout Jared Abbrederis knows it. But the unit may be coming to life after a solid effort in a 31-14 victory vs. Illinois last week that saw the Badgers notch 427 yards.

Abbrederis and his offensive counterparts will do their part to keep the offense moving forward with a big game at Purdue this Saturday that will go a long way toward determining pecking order in the Leaders Division.

The junior has 27 catches for 516 yards and a Big Ten-high five touchdowns-all team-leading totals for the 4-2 Badgers. He has done that in just five games, as Abbrederis missed the Utah State game with a concussion and chest injury in a 10-7 loss at Oregon State.

He?s fifth in the Big Ten in punt returns this season, averaging 7.9 yards per return.

Abbrederis, a 6-2, 188-pound product of Wautoma, Wisc., emerged last year as a go-to wideout for the Badgers during their second consecutive run to a Big Ten championship. He caught 55 passes for a team-high 933 yards (17.0 ypc) to go along with eight touchdowns. Abbrederis entered the season ninth on Wisconsin?s all-time receiving yards list with 1,479, coming on 88 catches with 14 scores. Not bad for a guy who began his career in Madison as a spread quarterback on the scout team before earning a scholarship in January 2012.

I caught up with Abbrederis after practice on Tuesday to get his thoughts on a variety of subjects as he prepped to play at Purdue.

Q: Are you pleased with your development this season?
A: I have done some good things. The coaches have put me in some good situations. And the rest of the team has been playing well. I?m really excited with what I have been able to do. But it?s not all about me. We have to be able to win some games. And we have won a couple. We have to keep that up.

Q: What one aspect of your game have you been most pleased with?
A: My route technique. Our receivers coach (Zach Azzanni) has been working with me on that. I have been able to run more crisp routes. And I have been able to get out of my breaks quicker.

Q: You guys made a switch at quarterback, with redshirt freshman Joel Stave taking over for Maryland transfer Danny O?Brien. Talk about Stave?s development.
A: He has good poise in the pocket. He will sit in there until the receiver gets open. He isn?t afraid to take a hit. We don?t want him to take too many hits. But he shown good poise in the pocket. He is doing well.

Q: Are you pleased with where the offense is? The rushing attack is just 11th in the Big Ten (133.5 ypg), while the passing game is 10th (195.3 ypg).
A: We had a bunch of new coaches and players step in. So, we had some growing pains. But I am pleased with what we have done. That?s all in the past and we have to keep practicing and getting better each day.

Q: Does the offense have some momentum going into Purdue?
A: Definitely. We played well the last game and we have to keep it going. Hopefully we can put together a four-quarter game.

Q: What do you think of the Purdue cornerbacks Josh Johnson and Ricardo Allen? Some think those two are NFL prospects.
A: They are great cornerbacks and I am looking forward to the challenge. They play well, and they play hard. It will be a good challenge for us.

Q: Take me into your playbook. What is your favorite route?
A: I like any route, any route where I can get the ball. I like going deep, obviously. But there are some fun shorter routes, too.

Q: Among the Badger receivers, who has the best hands?
A: Besides me? (laughs) I think they all have good hands. Chase (Hammond) has done well. He basically catches everything on his body. We work on catching the ball each day. So, a lot of us are confident in catching the ball. That?s the main thing-being confident. You can?t doubt yourself when the ball is in the air. You have to zone everything out and zone in on the ball.

[VIDEO: Montee Ball stays at No. 5 on latest Big Board]

Q: How important is it for a Badger receiver to block?
A: It is really important. Not only does that set up the play-action passes, but it gives the running backs an opportunity to break a long run. And running the ball is something we pride ourselves on. Nothing has changed this year. We are just trying to improve that.

Q: Did you envision having this kind of career when you arrived on campus?
A: I had confidence once I got here. Glory to God, it?s not me doing it but him working through me. So, I can?t take credit for that. It has been a fun ride. And I?m looking forward to getting better each day and I have that drive and desire to get better.