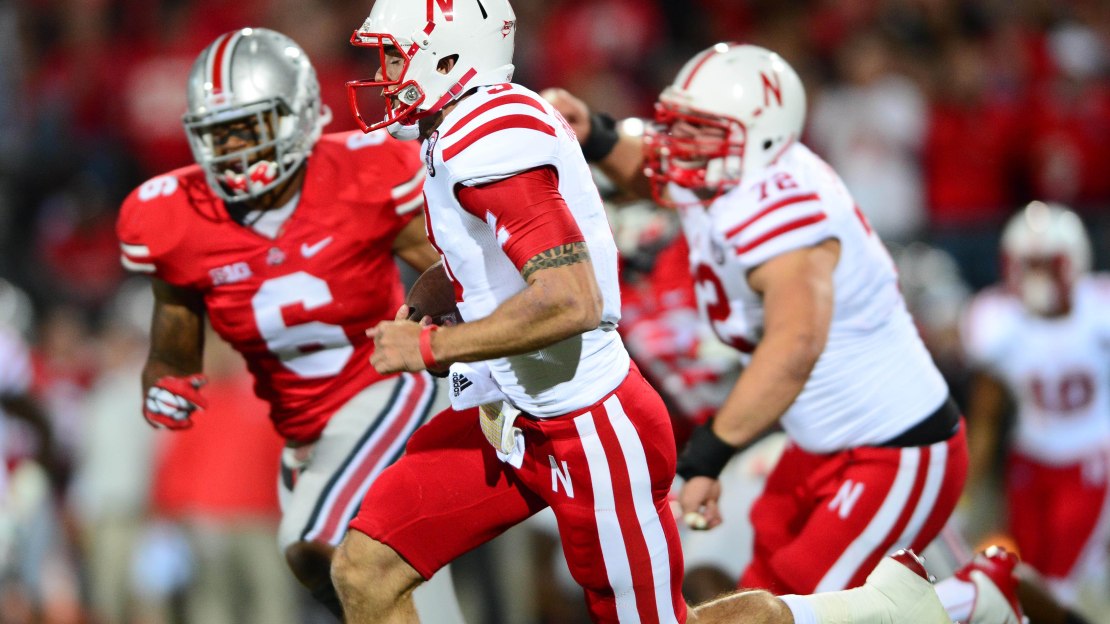 No. 20 Nebraska racked up 121 rushing yards in the first, and the Cornhuskers lead 14-7 at the end of the first quarter. Nebraska's defense shut down No. 12 Ohio State, allowing only 17 yards of offense in the quarter. The Cornhuskers have scored 14 unanswered points.

The Buckeyes made the score 7-0 when Bradley Roby intercepted Taylor Martinez's pass and returned it for a touchdown.

Nebraska tied the game at seven after Ameer Abdullah turned a handoff into a one-yard touchdown to end a six-play, 92-yard drive. The Cornhuskers didn't throw a single time on that drive.

Abdullah pounded in a three-yard touchdown run to break the 7-7 deadlock in favor of Nebraska. The play put the finishing touches on a four-play, 28-yard scoring drive. The Cornhuskers started in good field position when Abdullah returned a punt.

Nebraska has the ball on Ohio State's 22-yard line to begin the second quarter.

Player on the spot: Nebraska QB Taylor Martinez. It's this simple-if the junior doesn't play well, the Cornhuskers will have no chance to win. Martinez has been a revelation thus far in 2012, pacing the Big Ten in passing efficiency. He likely also will need to use his feet to extend plays and make some yards against a Buckeye defense that is filled with athletes up front. If you recall, Martinez rallied Nebraska from a 21-point deficit to 34-27 victory last year vs. Ohio State, which still needs to tackle better.

Key matchup: The Husker linebackers vs. Ohio State QB Braxton Miller. The Nebraska defense was ripped for 653 yards (second most ever in a game in school annals) at UCLA last month, but the group has rallied. In the last three games, Nebraska has yielded 286, 210 and 295 yards, respectively. But Miller-who was knocked out of last year's game in the third quarter with an ankle injury-is unlike any weapon the Huskers have faced in 2012. And spread offenses like Ohio State's have posed some issues for Nebraska. Linebackers Will Compton and Alonzo Whaley, among others, must rise to the occasion.

Key number: 19, sacks by the Cornhuskers through five games. Last season, Nebraska had 21 ? total. And the Huskers are first in the Big Ten in tackles for loss with 51 after finishing last in 2011.

Key note: The last time Nebraska played at Ohio State? It was 1956. This also marks the return of Bo Pelini, a Youngstown, Ohio, native who played defensive back at Ohio State from 1987-90 when Urban Meyer was a graduate assistant coach with the Buckeyes.