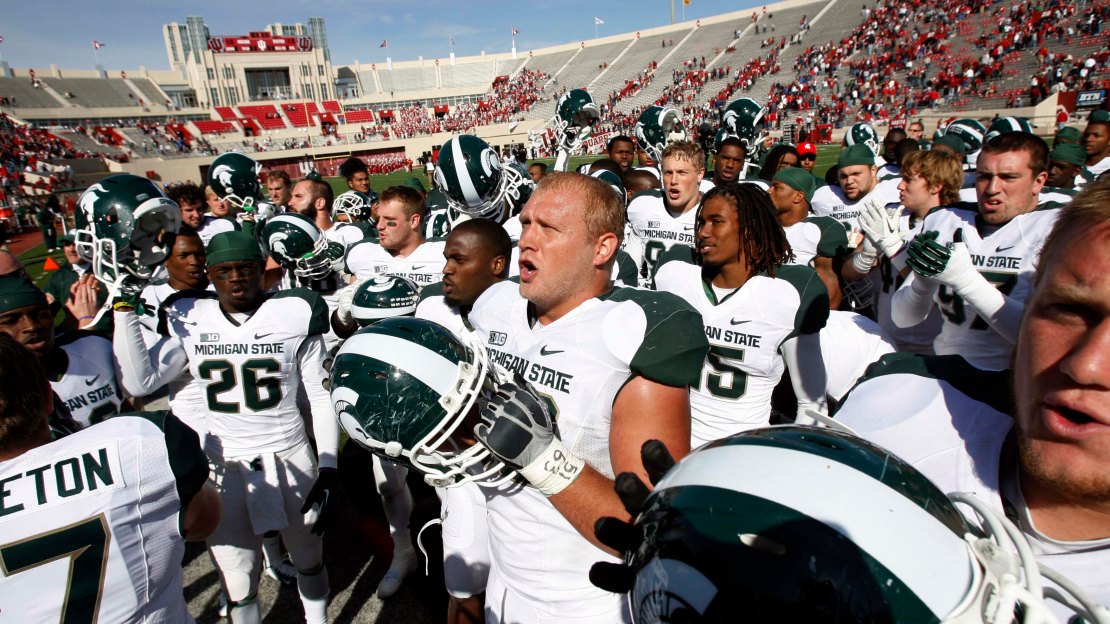 Andrew Maxwell passed for 290 yards and two touchdowns, and Michigan State rallied from a 17-point deficit to defeat Indiana 31-27 on Saturday. Aaron Burbridge caught eight passes for 134 yards and LeVeon Bell ran for 121 yards and two touchdowns on 37 carries for the Spartans (4-2, 1-1 Big Ten), who were coming off a 17-16 loss to No. 12 Ohio State.

Indiana could have given second-year coach Kevin Wilson his first conference win, but the Hoosiers went three-and-out on critical back-to-back possessions in the fourth quarter.

Michigan State, which gave up nearly 200 yards in the first quarter, held Indiana to 37 yards and two first downs in the second half.

FINAL: Michigan State managed to dig itself out of a hole and come from behind to record a 31-27 victory over Indiana on Saturday at Memorial Stadium. Things didn't look good for the Spartans when they trailed by 17 points in the second quarter. However, Michigan State eventually battled back to take the lead with 6:43 remaining in the fourth quarter when Andrew Maxwell threw a 36-yard touchdown pass to Bennie Fowler.

The Spartans' Maxwell was good for 289 yards during the game, completing 24 of 40 passes. Maxwell tossed two touchdowns and no interceptions. Maxwell had a good connection with receiver Aaron Burbridge. He hauled in eight catches for 134 yards.

Michigan State's offense dominated, ripping off huge chunks of yardage. The Spartans burned the Hoosiers' defense for four plays of more than 20 yards.

Cameron Coffman kept Indiana's offense on track, throwing for 282 yards and three touchdowns on 33 of 48 passing.

The Hoosiers racked up 317 total yards. Indiana's passing game had to do most of the work with the rushing attack contributing just 35 yards rushing on 19 attempts.

Michigan State's offense finished the game having gained 409 yards. Along with Maxwell's stats in the passing game, the Spartans also added 120 yards rushing on 42 attempts.