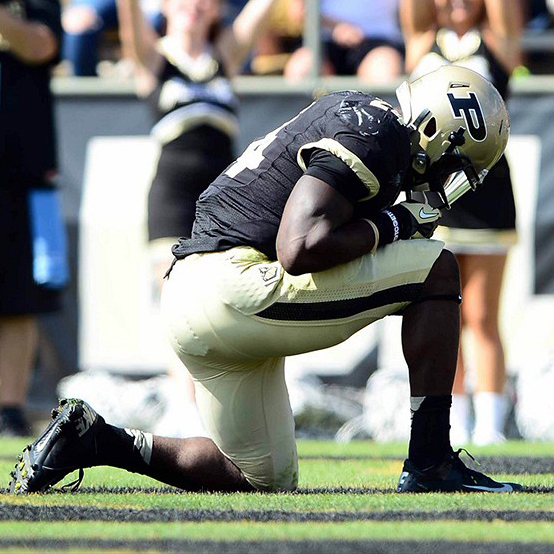 Everyone in the Big Ten needs to sit up and pay attention to this game. Yes, the Nebraska at Ohio State tilt is the marquee national matchup this weekend among Big Ten schools. But this game in Ross-Ade Stadium is the biggest there since Danny Hope became coach in 2009. Yes, bigger than last year?s home tilt against Notre Dame. And bigger than the victory at Indiana to conclude 2011 that pushed the Boilermakers to a bowl for the first time since 2007 and may have saved Hope?s job.

In fact, I?m going to say that this is the biggest Purdue game since Wisconsin visited Ross-Ade Stadium in 2004 in what is informally known among denizens as the ?Orton Fumble Game.? I?m sure every Purdue fan remembers that painful day when great possibilities were punctured with the sharp reality of how one bad play sent the Purdue program spinning off course for almost a decade.

Purdue was 5-0 and ranked fifth in the nation. And quarterback Kyle Orton was the No. 1 Heisman contender in many straw polls. Beat No. 10 Wisconsin on a mid-October afternoon in 2004 and the Boilermakers could have started to dream really big/ That means continue a building process that had the program consistently hovering among the elite in the Big Ten with three New Year?s Day bowls and one league title in seven seasons under Joe Tiller.

But leading 17-14 and less than three minutes from a program-defining victory, it all went so wrong.

Orton ran a bootleg and lunged for a first down. He was hit low by Badger cornerback Scott Starks and high by safety Robert Brooks.

Starks picked it up and raced 40 yards with what proved to be the winning score in a 20-17 Wisconsin victory that pushed the Badgers to 7-0 for just the second time since 1912. Wisconsin finished 9-3 and went to a New Year?s Day Bowl.

Purdue? It went on to lose four of its last six games to finish 7-5. And, truthfully, the Boilermakers never have recovered, slipping into second-class status in the Big Ten and not being a real factor in the conference to this very moment.

Since that fateful Oct. 16 day in 2004 when Orton?s fumble tumbled to the Ross-Ade Stadium, Purdue has gone 46-51 overall and 23-33 in the Big Ten with three meaningless bowl trips.

Fast forward eight seasons, and 3-1 Purdue looks like it is at another tipping point in program history with this big game. This time, the foe is a 2-2 Michigan team coming off a bye week that has something to prove and is at a tipping point of its own.

The Wolverines began the season as the Big Ten favorite, ranked No. 8 in the AP preseason poll coming off a glorious 11-2 season that was capped by a Sugar Bowl victory over Virginia Tech. But the short ride in 2012 has been bumpy, as the Wolverines have not only already lost twice-but looked bad doing so against Alabama and Notre Dame.

Doubt swirls around the feet of the Wolverines, who are 7-1 coming off byes since 2001. The offense has been the root of the problem, as quarterback Denard Robinson looks out of sorts with every pass seemingly being an adventure. The last time we saw Robinson, he was chucking four interceptions and losing a fumble in a 13-6 loss at Notre Dame that was his worst outing ever.

Robinson is looking to get on track. But trying to do it on the road against this Purdue team may be difficult. In 14 games away from Ann Arbor, Robinson has hit just 53 percent of his passes for 1,901 yards with 11 touchdowns and 13 picks and has been sacked 14 times. He also has averaged just 88.7 yards rushing per game.

Robinson still hasn?t developed good chemistry with his receivers, who remain a work in progress. And the running backs have disappointed. Same deal for an offensive line that was called out by Brady Hoke at halftime of the Notre Dame game.

What will be this team mindset? How will it respond to adversity if it hits early in the game?

Purdue has some mojo on its side but still is searching for a signature win as it begins a brutal three-game stretch to start Big Ten play. After Michigan, Wisconsin comes to Purdue. After that, the Boilers travel to Ohio State (full Purdue schedule here).

The Purdue defense may be among the best in the Big Ten, led by a terrific line and strong cornerback tandem. And the offense could be rounding into form behind quarterback Caleb TerBush. The attack may also get a lift from the return from knee injuries of quarterback Robert Marve and running back Ralph Bolden.

Just like in 2004, the possibilities seem endless for a Purdue team many think could reach the Big Ten title game coming out of a watered-down Leaders Division. And Michigan surely feels its possibilities also are limitless despite its two losses. This is a new season-the Big Ten season. And the Wolverines could still win a Legends Division that looks wide open and advance to the championship game in search of their first Big Ten title since 2004.

It begins Saturday for both teams in one of the biggest Big Ten games ever that doesn?t involve a ranked team.

[RELATED: Enter for a chance to win a trip to the 2012 Big Ten Football Championship.]

GRID BITS: In the three losses, the Fighting Illini are allowing an average of 43 points. ? Just two teams in the country have not notched an interception: Wisconsin and South Florida. ? During Wisconsin?s 19-game home winning streak, the Badgers have won game by an average of 30.7 points. ? Nebraska coach Bo Pelini and Ohio State coach Urban Meyer have met three times when Pelini was the LSU defensive coordinator and Meyer was the Florida head coach. Pelini took two of the three encounters. In 2005, LSU won, 21-17, as it held the Gators to 206 yards. In 2006, Florida won, 23-10, with the Gators getting only 288 yards. In 2007, LSU prevailed, 28-24, limiting Florida to 314 yards. Add it up, and Pelini held Meyer?s UF attacks to 167, 109 and 143 yards under its season average. ? Penn State hasn?t yielded a touchdown in the first half, outscoring opponents, 76-9. In the first three quarters of the last three tilts, the Nittany Lions haven?t yielded a touchdown. The only squad to score was Temple, which had two field goals after three quarters. ? How much are the Wisconsin signal-callers struggling? Through five games, they have completed 85 passes for 1,402 yards, 16.5 yards per completion and 280.5 yards per game with 13 scores. Through five games in 2012, the Badger signal-callers have completed 73 passes for 918 yards, 12.6 yards per completion and 183.6 yards per game with five touchdowns. ? Purdue has run back three interceptions for touchdowns this season. That?s second in the nation to Fresno State, which has four. ? The Boilermakers have missed four PATs. Purdue missed a combined five extra points from 2008-11. Oh, and the Boilers have had two punts blocked this season. ? For just the sixth time since 1980, Nebraska will have four weeks between home games. The Cornhuskers, who played host to Wisconsin last week and travel to Ohio State this Saturday, won?t return to Memorial Stadium until October 27 vs. Michigan. ? Indiana hasn?t won its Big Ten home opener since 2005. ? Wisconsin has lost is Big Ten opener four times in seven seasons under Bret Bielema. ? Illinois lost to Wisconsin only one time from 1978-92. But over the past 19 seasons, the Badgers are 11-3-1 vs. the Fighting Illini. ? Wisconsin has won 19 consecutive home games, which is the second longest active skein in the nation to LSU?s 21. ? In back-to-back home losses to Louisiana Tech and Penn State, Illinois has yielded 87 points, with 35 coming in the first quarter. The Illini also have surrendered eight sacks and committed nine turnovers. They also were just 12-of-35 on third and fourth downs (34.2 percent) and didn?t score on three of seven trips in the red zone.

Listen to me talk to Mike Hall on "#BTNLive" about this game earlier this week: