Daily Links: Who's up & who's down this week? 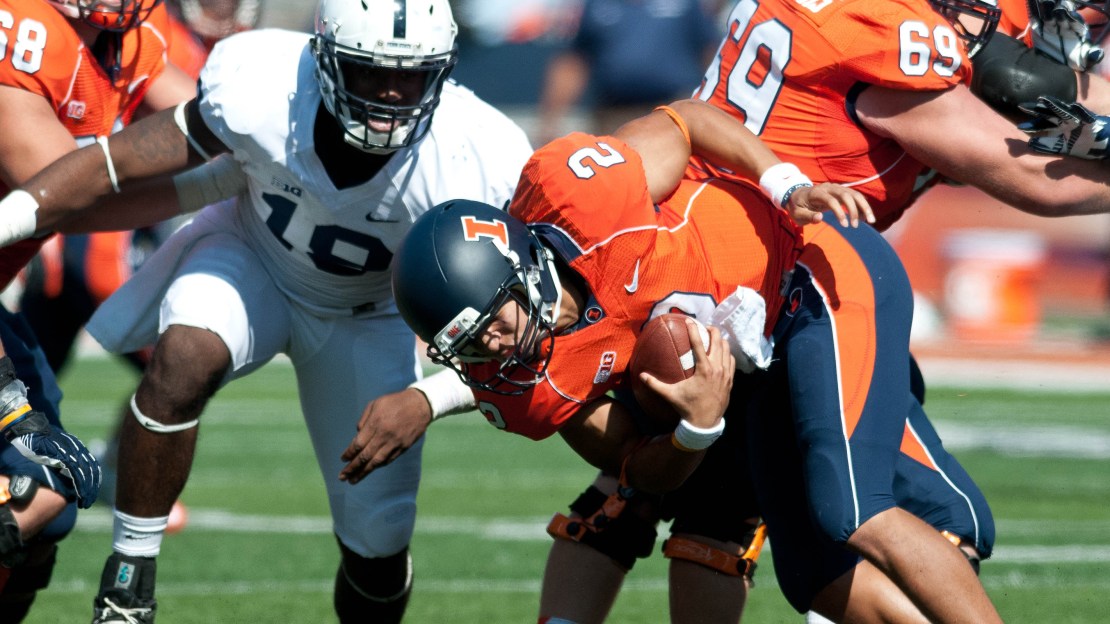 Let?s just say it isn?t a great year for Big Ten quarterbacks. In fact, according to David Jones of the Harrisburg Patriot-News, the conference?s signal-callers are at the bottom of the barrel. In other headlines in my daily links, we look at stories on Ohio State's improved linebacker play, Iowa's defensive uptick, and a fascinating comparison of the Buckeye and Husker programs through the years. Let's dive in.

QB drought: Let's get back to that piece by David Jones. How bad is it? Only one Big Ten quarterback ranks in the top 40 in efficiency: Nebraska's Taylor Martinez, who is 12th with an NCAA passer rating of 169.63. After that, you have to go to No. 41 to find the next Big Ten signal-caller: Ohio State?s Braxton Miller.

Where have you gone, Tom Brady, Drew Brees and Russell Wilson?

Synch it up: The timing between the Michigan receivers and quarterback Denard Robinson? It has been off all season, says Kyle Meinke of MLive.com.

Robinson's completion percentage has dropped to 54.5 percent. And his eight picks pace the Big Ten and are third in the country. Want more? Robinson has 54 completions this season. Purdue, Michigan's foe on Saturday, has two receivers who have combined for 53 catches. Add in a lack of production from the running backs, and the Wolverine offense is struggling as it enters arguably the biggest of the season.

Backer time: Most Ohio State watchers will tell you the linebacking corps was the biggest worry on an otherwise sterling defense coming into 2012. Well, the linebackers have been coming on of late.

Etienne Sabino, Ryan Shazier, Storm Klein and Curtis Grant have developed over the season to the point where their effort in the win at Michigan State was their best of the season. And it?s another reason why this may be the top defense in the Big Ten.

Streamliners: The philosophy of Iowa defensive coordinator Phil Parker is to keep things simple. I like it.

Ironically, that was the m.o. of former coordinator Norm Parker. Hey, why mess with success? According to Marc Morehouse of the Cedar Rapids Gazette, the Hawkeyes still play a 4-3 scheme. They blitz about 17 percent of the time, relying on the line to provide pressure. And they haven?t used a lot of press coverage with the cornerbacks, sticking with Cover 2 among other zone schemes. The result? Through five games, the Hawkeyes rank No. 29 in the country in scoring defense (17.4 points per game). Team-wide, that?s Iowa?s best national stat.

Measuring up: The great Tom Shatel of the Omaha World-News says Nebraska and Ohio State are a lot alike, really. Check out his tale of the tape:

Hold on now: Speaking of Nebraska, it needs to stop fumbling the ball. The Cornhuskers fumbled on three of their first six snaps last week vs. Wisconsin. At the final gun, Nebraska had six-count ?em SIX-fumbles vs. the Badgers. And it still won. Wow.

The fumbling continues a trend that has seen Nebraska fumble 15 times in the last four games. This, obviously, must stop with a huge game at Ohio State looming.

Time for a spark: The Illinois defense has been maligned most of the season. Entering 2012, it was thought to be a strength with several top pro prospects in players like Akeem Spence, Jonathan Brown, Terry Hawthorne and Michael Buchanan. How bad has it been? Illinois is last in the Big Ten in scoring defense (27.8 ppg). Alas, the defense has struggled. Perhaps the unit would benefit from playing at a higher energy level.

It?s worth a crack, as this defense needs some spark to keep the season from going sideways. A trip to Wisconsin looms, so the next challenge will be a big one.

As it was mentioned today, Michigan-Purdue week always reminds me of Joe Tiller, snake oil and wizard hats.

My take: Yes, that also was one of my favorite Joe Tiller moments. If you recall, Tiller was hacked that Roy Roundtree had de-committed at the last moment and opted to sign with Michigan.

Bradley Roby on Taylor Martinez: "I don't know what his 40 time is, but if he's out there, I'm gonna catch him."

My take: This will be one of the better individual matchups on Saturday. Can?t beat a speed-on-speed battle.

To prep for Penn State noise, #Northwestern has been playing loud music — in meetings. Fitz: ?It?s why most of the coaches (are) hoarse."

My take: Coaches always are hoarse, aren?t they? But, I do have to say: loud music usually is reserved for the practice field. In meetings? Really?

My take: Could we see running back Ralph Bolden this week? Hmmm. With Michigan coming to town, it seems like a good time to put him in. I would. No sense saving him.

Here's a Taylor Martinez stat for you. Over the last 12 games he's only thrown three interceptions. His previous 12 games he threw 10.

My take: Yet more proof of Taylor Martinez?s continued development. Yet, some still feel compelled to criticize the kid. Amazing.