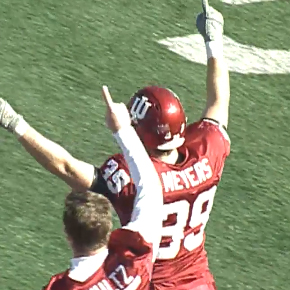 Michigan State visits Indiana this Saturday for a noon ET kickoff on BTN/BTN2Go, and that reminded us of a 2006 classic game between these two programs. On Oct. 28 of that season Indiana's James Hardy caught four of Kellen Lewis' five touchdown passes as Indiana won 41-26 in front of their home fans. In what will be an occasional series of Big Ten Classics on BTN.com & BTN2Go, we?ve gone into the archives to recover the full telecast of the 2006 game. The full game is posted on BTN2Go, but we?ve clipped a portion of it here for you to enjoy.

The win in the trophy game gave the Hoosiers possession of the Old Brass Spittoon, and CrimsonQuarry.com has a recap of the day in their archives. Before this, Indiana players last held the Spittoon in 2001, when Levron Williams rushed for 251 yards and three scores in Indiana?s 37-28 victory in East Lansing on Nov. 10.

In this 2006 game, the freshman Lewis wound up going 15-of-26 for 261 yards and took his streak of consecutive pass attempts without an interception to 146 before a late Spartans pick. Also, the Hoosiers scored their most points of the season and the most since Indiana's 56-21 win over Northwestern on Nov. 3, 2001. The 46 points are the most scored by any Hoosier team in the Terry Hoeppner era and the most Indiana has ever scored against Michigan State. Read the full game notes at IUHoosiers.com.

[RELATED: Watch more shows like this on the web, mobile phone or tablet with BTN2Go.]

You may remember the 2006 season – the week before this game Michigan State pulled off the biggest comeback in Division I-A history by coming back from 35 points down to beat Northwestern 41-38. Previously on Big Ten Classics, we profiled Purdue's classic game 1968 win over Notre Dame in South Bend back in 1968. The full game is posted on BTN2Go.