Tuesday's Links: How is this race shaping up? 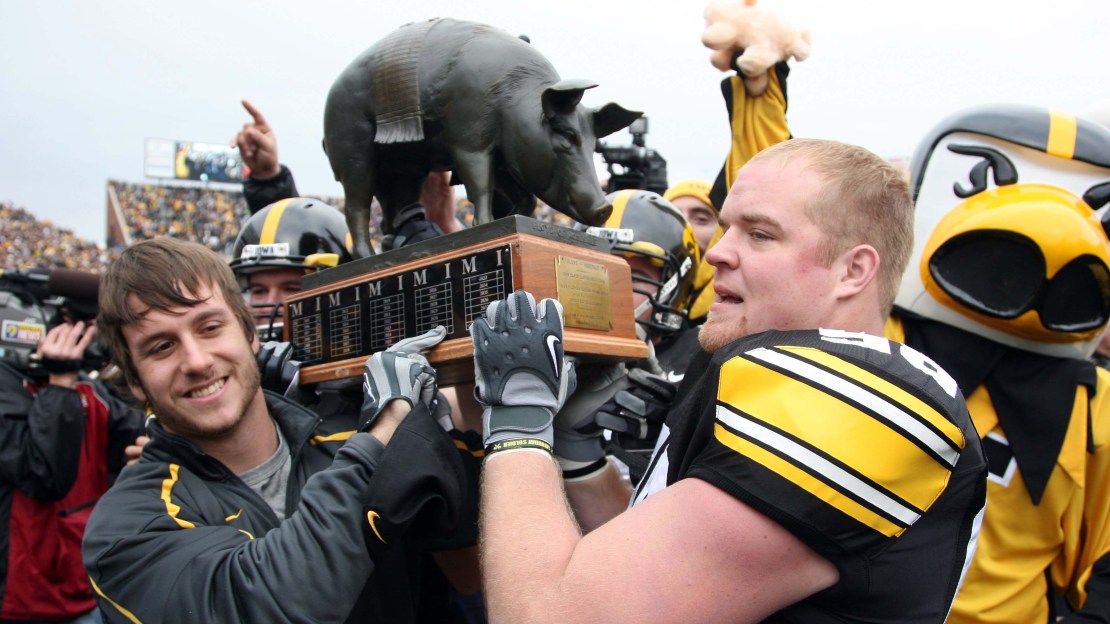 The great Pat Harty of the Iowa City Press-Citizen takes the temperature of the Big Ten race. Did you see that video of Iowa players celebrating Saturday? Urban Meyer says Ohio State did nothing wrong with that game film. And at 0-1 in the Big Ten, Wisconsin seems to be in familiar territory. We take a look at those stories and more in today's Big Ten Links.

Bad losses: Among other things, what Big Ten losses does Harty feel were most embarrassing? He has Louiiana Tech over Illinois, 'Bama over Michigan, and  Central Michigan over Iowa. That sounds about right. Others on my list: Ball State over Indiana; Arizona State over Illinois. I also thought Michigan State?s home loss to Notre Dame was awful.

BTW: That Wisconsin defeat at Oregon State isn?t looking so bad, is it?

Watch this: How thrilled were the Iowa players to get their hands on the Floyd of Rosedale Trophy after beating Minnesota? Check out this video. This is why college football is the greatest sport in the galaxy.

Look around: Penn State fans all know about stud Nittany Lions like Jordan Hall, Gerald Hodges, Adrian Amos, Michael Mauti and Allen Robinson. But there are other good Penn State players, according to Bob Flounders of the Harrisburg Patriot-News.

Coming together: Ohio State coach Urban Meyer says the Buckeyes jelled as a team last week with that win at Michigan State. And, if Meyer says it, it must be true.

It can be argued the Buckeyes? win in East Lansing has been the most impressive victory for any Big Ten school this season. No doubt, the defense played well after entering the game last in the Big Ten. The offense? It still has some fine-tuning. But Braxton Miller makes most any play look good. Am I right, people?

Speaking of Meyer ? remember that flap over alleged doctored game film that Michigan State made against OSU? Well, Meyer denies Ohio State did anything wrong.

Familiar feeling: Wisconsin is 0-1 in the Big Ten. But, don?t fret, Bucky. You?ve been in this situation before.

Watch out: Is a Spartans offensive lineman gouging the eyes of Ohio State defensive lineman Johnathan Hankins? You be the judge after watching this video. Buckeye coach Urban Meyer wants the Big Ten to review the tape.

Think Michigan State and Ohio State have a growing feud?

Staying the course: Michigan quarterback Denard Robinson has his share of critics this year, especially after a five turnover game in an ugly loss at Notre Dame the last time we saw him. But Brady Hoke is standing by his man.

Daunting challenge: The Nebraska offensive line is coming off a big effort in a win over Wisconsin, helping the Huskers run for 259 yards against a defense that had been yielding 80 a game. Now, a bigger challenge looms at Ohio State vs. a Buckeye d-line that?s among the best in the Big Ten.

The Spartans ran 22 times for 34 yards vs. the Buckeyes last week. That works out to a scant 1.5 yards per tote. Good luck, Huskers.

Cheer up: It?s time to put the brakes on the bad mojo around Illinois, says the great Loren Tate of the Champaign News-Gazette.

The Illini are being hampered by some depth and injury issues. In fact, the team reportedly has lost the equivalent of 23 games by starters, says Tate. But, it will be difficult for Illinois to rebound from ugly home losses to Louisiana Tech and Penn State the next two weeks. Up next: at Wisconsin; then, a game at Michigan.

Bielema: Every NFL scout that comes through here tells me (Montee Ball) is better this year than he was last yr despite numbers #badgers

My take: I have to say: This is a bit shocking.

Fitz calls PSU defense "the best we will have played to date."

My take: Let?s see ? There have been Syracuse, Vanderbilt, Boston College, South Dakota and Indiana. Yes, I think Pat Fitzgerald is right. In fact, I think he?s VERY right.

My take: So, I guess the Huskers will work on tackling this week. But, if they miss a few on Saturday, they shouldn?t feel bad. Braxton Miller is good at avoiding tackles. Ask Miami (Ohio), UCF, Cal, UAB and Michigan State.

Taylor Lewan said there were 23 missed assignments against Notre Dame. Should be closer to 1 or 2.

My take: I?m not sure if this is a good thing.