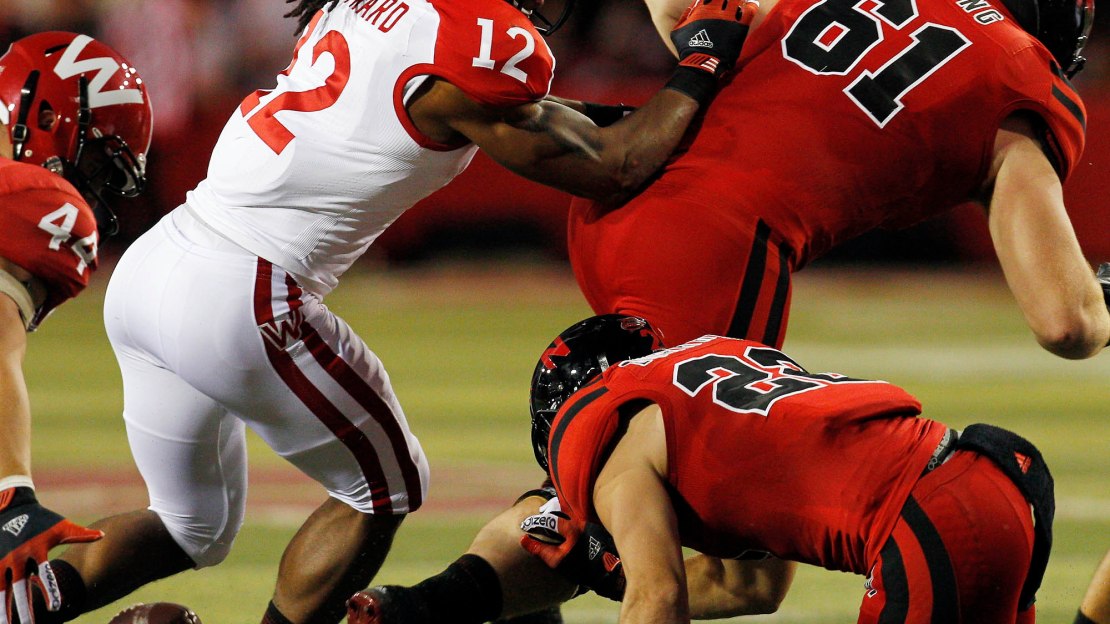 No. 23 Wisconsin stifled No. 20 Nebraska's offense, giving up just 38 total yards in the first quarter and the Badgers lead 14-3 at the end of the first quarter. Wisconsin sniffed out the Cornhuskers' rushing attack in the quarter, holding Nebraska to 21 rush yards. The Badgers scored when Montee Ball ran two yards to paydirt to clinch a five-play, 71-yard drive, giving Wisconsin the game's first lead. The key play on the Badgers' drive was Joel Stave's 54-yard pass.

Wisconsin expanded its lead to 14-0 thanks to a seven-play, 23-yard drive that ended when Ball turned a handoff into a one-yard touchdown. The Badgers began the drive with good field position after Wisconsin recovered a fumble. The Badgers kept the ball on the ground during the drive, throwing only one pass.

The Cornhuskers capped a two-yard drive when Brett Maher made a 28-yard field goal to make the score 14-3. Ameer Abdullah's big kickoff return set Nebraska up at Wisconsin's 13-yard line to start the drive.

The Badgers will start the second quarter with the ball on their own 49-yard line.

Player on the spot: QB Joel Stave. The redshirt freshman is making just his second career start. He looked solid last week in a workmanlike win over UTEP, hitting 12-of-17 passes for 210 yards with a touchdown and pick. But is he ready to wade into an environment like he will see on Saturday at Lincoln? Look for Nebraska-which will face a more traditional and physical attack after encountering spread schemes the first four weeks-to commit to stuffing the run and to come after Stave.

Key matchup: Nebraska QB Taylor Martinez vs. Wisconsin front seven. The Badgers lack great athletic ability and speed. And the defensive ends are banged up. Still, the unit is 13th nationally vs. the run (80.8 ypg) and 33rd in scoring defense (17.8 ppg). Linebackers Chris Borland and Mike Taylor are formidable. If Wisconsin can?t get a push off the edge and get heat on Nebraska quarterback Taylor Martinez, the Huskers may have lots of success. This is the No. 1 total offense and scoring offense in the Big Ten that also is fueled by running backs Rex Burkhead and Ameer Abdullah. But the Huskers must guard against penalties and turnovers, bugaboos last year.

Key number: 3, interceptions thrown by Taylor Martinez last year at Wisconsin. He?s now No. 1 in the Big Ten in passing efficiency and maybe the best quarterback in the league.

Key note: Montee Ball suffered a concussion last week but has been cleared to play. Still, if he?s limited, the Badgers still have two nice backs in Melvin Gordon and James White, as Wisconsin plays at Lincoln for the first time since 1973. The tandem combined for 23 totes, 177 yards rushing and three scores last week.