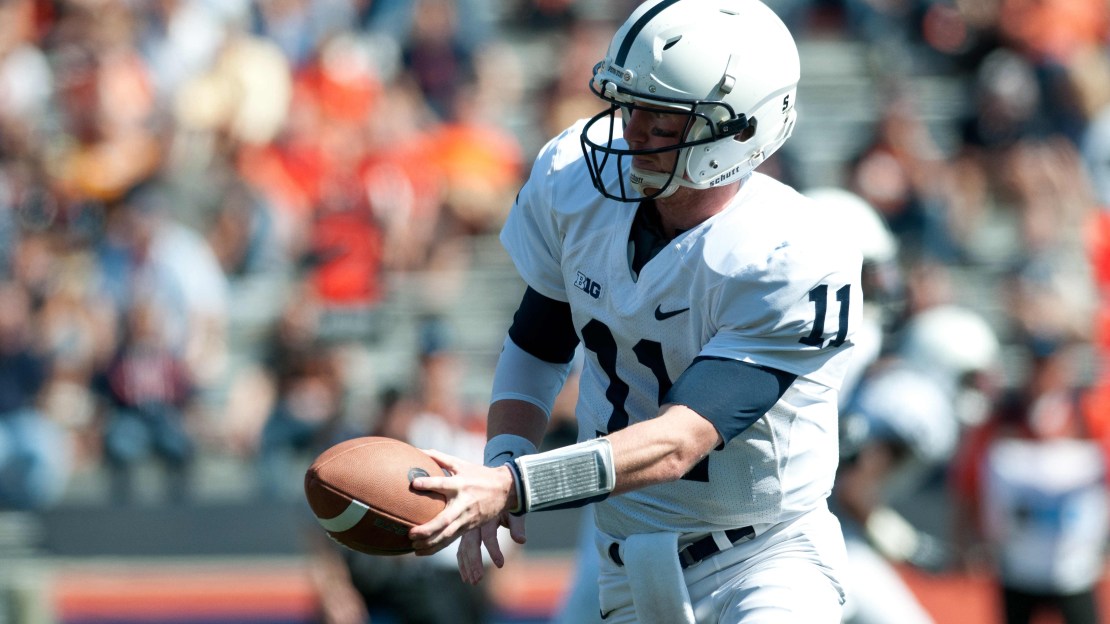 Every Saturday during the football season, BTN.com senior writer Tom Dienhart offers his Snap Reactions to every Big Ten game. See his thoughts from the Big Ten's three early Week 5 games in this post. Among his thoughts: Is it time to put Matt McGloin in the conversation for Big Ten Offensive Player of the Year?

Penn State 35, Illinois 7
1. Is any team in the Leaders Division playing better than Penn State? Hmm. The Nittany Lions have won three in a row after a 0-2 start. With better kicking, Penn State may be 5-0. As it stands, the Nittany Lions are on a roll, with the offense gaining steam each week behind Matt McGloin. Up next: a visit from Northwestern.

2. Is it time to put Matt McGloin in the conversation for Big Ten Offensive Player of the Year? He entered today?s game with more passing yards (1,006) and touchdown passes (nine) than any player in the Big Ten. Today, he hit 18-of-30 passes for 211 yards with a touchdown. The senior is the heart and soul of an attack that has leaned on the pass.

3. Illinois needs something positive to happen. The Illini committed three turnovers today and ran 22 times for 74 yards. Illinois also had eight penalties for 69 yards on a day when little went well for a program that has lost back-to-back home games by an aggregate 87-31.

Iowa 31, Minnesota 13
1. The Hawkeye offense can score and it does have explosive ability. The Hawkeyes entered the game ranked 10th in the Big Ten in offense (357.8 ypg). Well, Iowa came alive today vs. a Minnesota that ranked third in the Big Ten (307.5 ypg), notching 374 yards. Mark Weisman continues to amaze, as he ran for 177 yards and a touchdown.

2. Never underestimate a Kirk Ferentz-coached team. Iowa hadn?t looked great the first four games of the season, dropping contests at home to Iowa State and Central Michigan. But Ferentz showed his moxie by pulling off a huge victory in what may felt was a must-win situation for the Hawkeyes.

3. This doesn?t end the feel-good vibe emanating from Minnesota. The Gophers are 4-1 with many great goals still within reach. This loss exposed some of Minnesota?s issues, but there still are winnable games on the schedule for the Gophers in their quest for their first bowl since 2009.

Northwestern 44, Indiana 29
1. The Wildcats? wild ride continues, as NU is now 5-0 for the third time in five years. You name it, and it worked for the Northwestern offense on this day. The quarterbacks had a field day. Trevor Siemian threw for 308 yards, while Kain Colter led the Wildcats in rushing with 161 yards and four touchdowns and led in receiving with nine receptions for 131 yards.

2. Should Indiana start Nathan Sudfeld at quarterback? For the second time in two games, the true freshman has come on for Cameron Coffman and rallied the Hoosiers. Sudfeld hit 9-of-16 passes for 157 yards and a touchdown today.

3. The Hoosiers still have issues on defense. The Wildcats notched a school-record 704 yards! Northwestern ran 58 times for 394 yards in the win, averaging 6.8 yards per carry as seemingly everything works for the Wildcats.