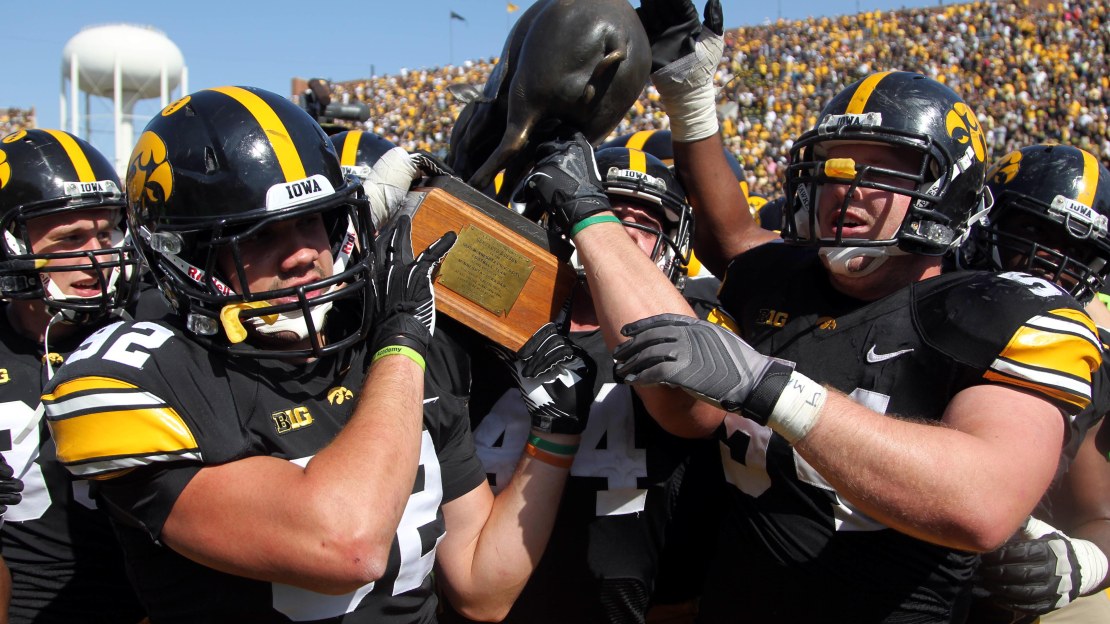 Mark Weisman ran for 177 yards, 155 in the first half, to lead Iowa to a 31-13 win over Minnesota on Saturday and give the Hawkeyes possession of the Floyd of Rosedale bronze pig trophy. Christian Kirksey's 68-yard interception return for a touchdown in the fourth quarter sealed the win for Iowa (3-2), which bounced back from last week's disappointing 32-31 loss to Central Michigan to win the Big Ten opener for both schools.

Minnesota (4-1) was off to its best start since 2004, but couldn't get anything going on offense Saturday. Max Shortell threw three interceptions and the Gophers managed only 75 yards in the first half. The Hawkeyes scored three touchdowns during a six-minute span of the second quarter to jump out to a 24-0 halftime lead.

FINAL: Iowa's Mark Weisman and James Vandenberg led the way in a 31-13 win over Minnesota on Saturday at Kinnick Stadium. Vandenberg racked up 192 yards through the air and Weisman rumbled for 177 yards and one touchdown on the ground.

The Hawkeyes' explosive offense used big plays to take down the Golden Gophers. Iowa had seven plays of 20 yards or more on its way to victory. With 13:12 to go in the second quarter, Vandenberg and Jordan Cotton hooked up for a 47-yard touchdown, the Hawkeyes' longest play on the day. The score gave Iowa a 17-0 lead.

The Golden Gophers racked up 300 total yards. In addition to Shortell's efforts through the air, Minnesota also rushed 32 times for 103 yards.

The Golden Gophers' Shortell was good for 197 yards during the game, completing 20 of 33 passes. Shortell tossed two touchdowns and three interceptions. Shortell had a trusted receiver in A.J. Barker. He hauled in five catches for 74 yards.