Dienhart: These 5-0 Buckeyes are very good 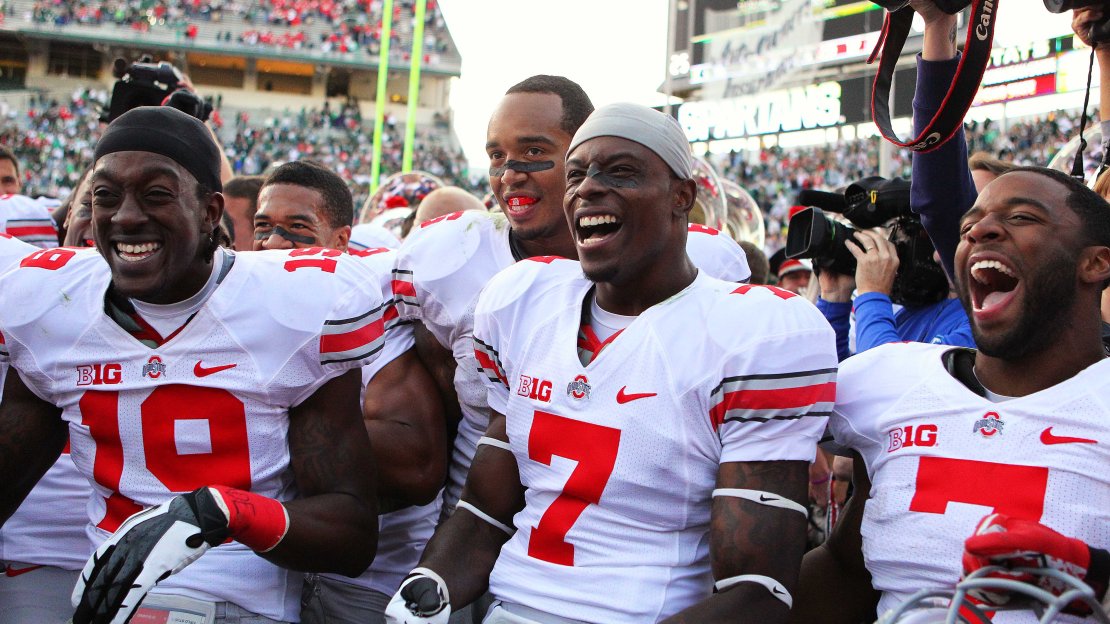 We interrupt your week filled with Big Ten bashing to tell you that Ohio State is good. It?s very good, in fact. Probably the best team in the Big Ten and reason to emote some conference pride.

The Buckeyes looked the part of a very good team in methodically dispatching Michigan State, 17-16, today in East Lansing vs. a Spartan team that was desperate to show it was legit after looking inconsistent the first four games.

?I know the Big Ten has taken some heat; I thought that was a great game, great atmosphere, bunch of great players on the field,? Urban Meyer said. ?We played at the next level and that was good for college football and good for the Big Ten.?

No, it wasn?t a perfect performance by the Buckeyes. But it was the best effort of the season for Ohio State, which played four solid quarters and made some big plays to escape with its eighth win in nine games vs. MSU, avenging last year?s 10-7 loss to the Spartans.

Ohio State can still win the Leaders Division despite being on probation. Heck, the Big Ten office has even said it would give the Buckeyes a shiny trophy to display somewhere in its shiny football complex if it happens. But, alas, Ohio State can?t play in the Big Ten title game or go to a bowl.

It all seems fitting, doesn?t it? In a season when the Big Ten could use a shot in the arm, its top team can?t represent in the postseason, where it could claim some much-needed conference pride with a possible victory over a power from, say, the SEC.

So, Ohio State will have to be satisfied with trying to run the table and rule the Leaders Division over programs like Wisconsin, Penn State, Purdue, Illinois and Indiana.

While a debate can rage on if Ohio State is an elite team nationally in its maiden voyage under Meyer, this game should put to rest any questions about who the best player in the Big Ten is. At least for another week. Buckeye quarterback Braxton Miller was simply outstanding.

?He?s a great quarterback, he can run the ball, and we just didn?t make enough plays on him,? said Michigan State defensive coordinator Pat Narduzzi, whose defense generated three turnovers. ?He is their offense.?

Playing with a tweaked knee, the sensational sophomore hit 16-of-23 passes for 179 yards with a touchdown and pick. And no pass was more sensational than his 63-yard scoring strike that hit Devin Smith in stride in the third quarter to give Ohio State a 17-13 lead it wouldn?t relinquish.

But it was Miller?s astounding and stupefying running skills that again stole the show. He ran 23 times for 136 yards, many of them of the jaw-dropping variety. Last year, Miller had minus-27 yards rushing vs. Michigan State.

He is VERY good. And his Buckeye team is VERY good, showing more of its potential than it had in games vs. Miami (Ohio), UCF, Cal and UAB.

?This game was a confidence boost that we can go out there and make the plays and we can do our job,? said Ohio State defensive tackle Johnathan Hankins. ?We are going to continue to make progress.?

Yes, it would be nice if Miller got more help. The Ohio State coaches have been saying each week that they want to spread the work load, that Miller is shouldering too much of the burden. Get the ball to Jordan Hall, get the ball to Carlos Hyde, get the ball to Devin Smith ? But, it?s not happening. Can Miller keep this up all season? He may have to. And the defense also needs to keep playing like it did today.

Michigan State finished with 303 yards, running 22 times for 34 yards. That comes out to a scant 1.5 yards per tote. The Buckeye defense was geared to stop star Spartan running back Le?Veon Bell. And, it worked. Bell ran just 17 times for 45 yards (2.6 yards per carry). His long run? Eight yards. Bell came into the game averaging 29.3 carries and 152.5 yards rushing.

?Give credit to them, they did a good job stifling our run game a little bit, but that gave opportunities for guys to make plays outside and that?s what we did,? said MSU quarterback Andrew Maxwell.

The Spartans tried to get Bell the ball on short passes, as he caught eight for 58 yards. It wasn?t enough for a Michigan State offense that has scored three touchdowns in its last three games.

Maxwell had his moments throwing, but he hit just 52 percent of his passed (22-of-42) for 269 yards with a touchdown. A struggling MSU passing game was hurt by numerous drops-again-by the wideouts. And Maxwell misfired on some attempts.

?They just played physical,? Maxwell said of the Buckeye defensive front. ?I thought they had a good pass rush all day. They didn?t blitz a whole lot, that?s a good defensive line; they?re going to cause a lot of people some problems.?

Ohio State will be favored in the rest of its games. It?s true. Check it out. The Buckeyes play host to Nebraska next in a huge inter-divisional clash then play at Indiana; Purdue; at Penn State; Illinois; at Wisconsin; Michigan.

You thinking what I am thinking? You know, that Ohio State could duplicate the feats of the 1993 Auburn Tigers led by first-year coach Terry Bowden-who now ironically coaches in Ohio at Akron. That team was shackled with NCAA probation and ineligible for the SEC title game, a bowl and even from being on TV. Regardless, the Tigers went 11-0 and finished No. 4 in the A.P. poll. This Ohio State team could have a similar destiny.

?I think it was just an attitude thing and a revamped program,? said Ohio State center Corey Linsley. ?As Coach Meyer puts it, if you get kicked enough times, you are going to respond eventually. That was us today. I am proud of our guys.?