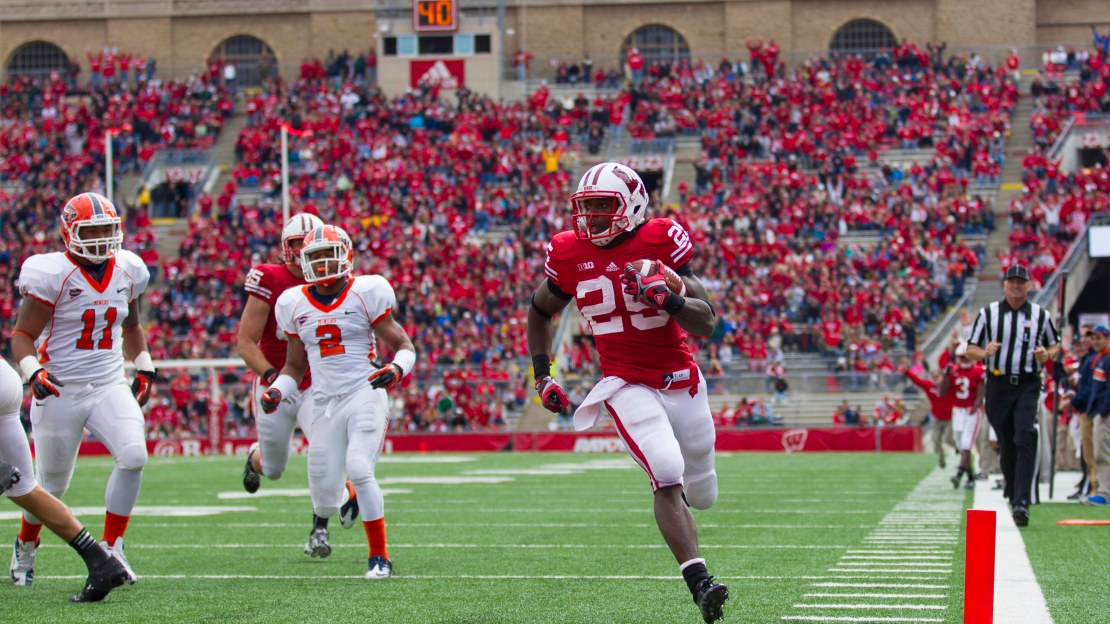 The Gophers can thank one specific unit for their early rise this season. Wisconsin has a new face in the backfield and he looks electric. Penn State does something interesting with their offensive lineman each week, and the Wisconsin-Nebraska game is becoming a new rivalry. And where is Nebraska looking when it comes to finding a new athletic director? Read about all of this and more in today's Big Ten links.

Gophers rising: Has there been a better early-season story in college football than Minnesota and its 4-0 start? I think not. And the key to the Gophers? rise has been defense. Yes, DEFENSE.

In six of the last eight years, the Gophers have ranked between 8th-11th in total defense in the Big Ten. Minnesota is third this season. And it leads the Big Ten in turnover margin and is second in sacks and picks.

Back it up: With Montee Ball out with a concussion early in last week?s game against UTEP, Wisconsin got a glimpse of its future. And it had to like what it saw from redshirt freshman Melvin Gordon.

In the win vs. UTEP, Gordon ran for 112 yards and showed a burst and elusiveness that impressed. We may see more of Gordon this week at Nebraska if Ball is held out. So, it looks like the Badgers pantheon of great runners that includes the likes of Ron Dayne, Anthony Davis, Terrell Fletcher, John Clay and Brent Moss, among others, soon may have company.

Quiz time: Penn State offensive line coach Mac McWhorter is one of the best in the business. And we already have seen examples of his fine work this season in assembling a solid unit in State College, Pa. One of his tools to prep his players are weekly tests administered to his big fellas.

You see, it?s not all about muscle and mite on the interior. This suddenly is a kinda scary Penn State team. And I never thought I would have typed that a month ago.

Hear the roar: After that 48-17 whipping that Wisconsin gave to Nebraska last season in Madison, is this a burgeoning rivalry? Hmm. Maybe so.

The end of last year?s game provided some fuel, with Nebraska calling a timeout with 12 seconds left and the ball on the 1-yard line in an effort to score. But Taylor Martinez was stuffed short and it triggered a wild Badger celebration. Earlier in the game, Martinez scored a touchdown and got in the face of Badger linebacker Chris Borland. That was part of the reason why Wisconsin went wild after that final score. I can?t wait for Saturday night!

On track: Yes, Denard Robinson has had some turnover-prone games. But, it doesn?t matter: Michigan offensive coordinator Al Borges still says his quarterback is an improved passer.

Perhaps, but some numbers don?t lie-like Robinson?s eight interceptions, which lead the nation. But ?Shoelace? is first in the Big Ten in total offense (319.5 ypg) and is second in rushing (110.2 ypg). He remains a deadly weapon and has a week off to hone his skills before Michigan opens Big Ten play Oct. 6 at Purdue. I?m not giving up on Robinson and the 2-2 Wolverines. And you shouldn?t, either.

Was it good? Was it bad? It depends on your view. Me? I didn?t like it.

Who's got next? The big news this week has been Nebraska?s Tom Osborne announcing his retirement as athletic director effective on January 1. Now, speculation has begun on who will be the next Cornhusker A.D.

WR Corey "Philly" Brown knows OSU has only scratched surface of new offense. Yet in 4 games he has 20 catches, 6 more than all last year.

My take: This is what they call in the coaching biz a ?good sign.?

My take: This going to have to happen if Michigan wants to be successful on offense.

How many programs have gotten less out of supposed QB talent than PSU in recent years? Devlin, Newsome, Bolden, Jones all 4-star guys.

My take: I guess I want to find someone to blame, but, I can?t. This is an indictment of the recruiting ?star? system. What?s really amazing is none of those guys could beat out Matt McGloin, who arrived on campus as a walk-on. Incredible.