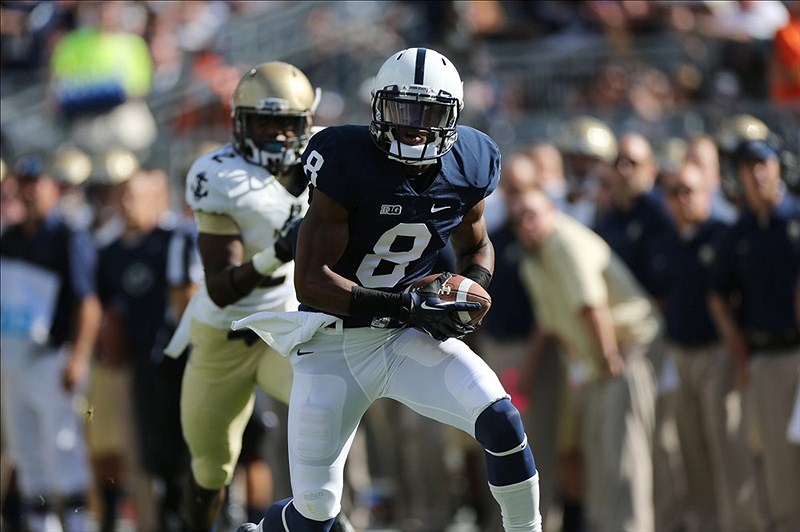 Are the scheduling gods against Penn State? Cory Giger of the Altoona Mirror thinks that may be the case. The Nittany Lions are starting Big Ten play on the road for the third consecutive years and seventh time in nine years. Conversely, Ohio State has started Big Ten play with a home game 14 times in the last 20 years.

Conspiracy? I don?t know. But it?s fun food for thought. I do think I saw someone in the grassy knoll by the Big Ten headquarters, however.

Husker update: Big news apparently coming out of Nebraska this morning. BTN is airing the Huskers' live press conference at noon ET on TV and on BTN2Go. Tom Osborne and school chancellor Harvey Perlman will be there.

Discussion time: The Big Ten?s struggles in recent seasons are well-documented. It gets down to talent, really. Leagues like the SEC have lots of it. The Big Ten? Not so much. Todd Jones of the Columbus Dispatch explains.

And Jones? piece has one ?oh-my-gosh? factoid: Alabama, LSU, and Florida have combined for more first-round picks (17) in the past three NFL drafts than the entire Big Ten has produced (15) in that span.

Wait, there?s more: Six Boise State players have been taken in the first three rounds over the past three drafts; the Broncos? three first-rounders match the number produced by each of three Big Ten schools: Iowa, Wisconsin and Illinois
Talk amongst yourselves.

Fixer upper: That 4-0 start and amazing turnaround at Minnesota? It?s nothing new for Jerry Kill. He has done similar rehab projects at places like Northern Illinois and Southern Illinois, among other the stops. The guy is a special coach who has a special staff.

I kinda hope this feel-good story doesn?t end for a lot of reasons. But the biggest reason is that I love the humble Kill, who has overcome cancer to still excel professionally and personally.

Struggles on D: The Illinois defense was supposed to rate among the best in the Big Ten. Why not? The unit welcomed back lots of top talent, including the likes of tackle Akeem Spence, cornerback Terry Hawthorne, linebacker Jonathan Brown and end Michael Buchanan. These are future pros, people! But, the unit has struggled, giving up 52 points to Louisiana Tech and 45 to Arizona State.

Some issues: Tackles for loss are down from nearly eight per game to five. And the Illini are getting 1.5 sacks per game after getting 3.5 per game in 2011. According to Spence, Illinois is blitzing less, which could be an issue. Maybe the start of league play will help. Maybe not.

Someone has to be a brunt of critics for Iowa?s uneven 2-2 start. And that someone is quarterback James Vandenberg.

Playing through it: Vandenberg ranks 11th in the league in passing efficiency. And he has one touchdown pass. That has led for some to wonder if-Oh, you know what?s coming–perhaps backup Jake Rudock should be put in.

Grudge match? Many anticipate Penn State?s visit to Illinois–not necessarily because of the on-field drama. But because the Illini actively recruited Nittany Lion players last summer after the NCAA announced they were fair game as part of penalties involving the Jerry Sandusky scandal. But Bill O?Brien and Penn State players act like the game this Saturday in Champaign is no big deal because of that storyline. Uh, OK.

Still, you have to think there are some feelings underneath those politically correct feelings. Right?

Now's the time: Yes, Michigan is 2-2, with both losses being highly-publicized defeats to Alabama and Notre Dame. But despite those setbacks, the Wolverines think their season still can come up smelling like roses.

Why not? It?s not like Michigan lost to two bad teams. Maybe getting pushed, tested, and beaten will make the Wolverines a better team. They know their weaknesses and know what to improve. Michigan is off this week and can focus for two weeks on prepping for the Big Ten action. So, I?m not writing off the Wolverines. And neither should you.

Support from above: The drops and general inconsistency of the Michigan State receivers are well-documented. But that isn?t stopping Mark Dantonio from continuing to support his wideouts.

Aaron Burbidge, Macgarrett Kings, Jr., Tony Lippett, Keith Mumphery, DeAnthony Arnett, Bennie Fowler ? there is lots of talent in East Lansing. For now, the top pass catcher is tight end Dion Sims. But I think some of these receivers eventually will step up. And with Ohio State coming to East Lansing, this would be a good time for it to start.

Old school: No doubt, Minnesota is motivated to retain the Floyd of Rosedale Trophy for a third season in a row when it wades into Kinnick Stadium. But the Gophers will be motivated by more than just keeping the bronzed pig. They will be motivated by something that happened in this series back in 2002.

After Iowa thumped the Gophers that year to clinch a Big Ten crown, Hawkeye fans stormed the Metrodome field, ripped down the goal posts and tried to carry them out the stadium. The gall!

Yes, that was a decade ago, but Goldy is still fuming. And motivated by the disrespect in their house.

Mich St coach Dantonio, on 4-0 Minnesota: "They may be the surprise in the conference."

My take: Welcome to Bizarro World.

#MSU AD Mark Hollis says Notre Dame has not contacted MSU about any changes in their series. Says both schools have out clauses.

My take: If ND is dropping Michigan, I would be surprised if it kept its series with MSU and Purdue, too. ND gains little from an exposure standpoint from playing either school. Think about it.

Thomas Gordon on Notre Dame leaving. "It's unfortunate. … But it's whatever."

@carminjc: Asked if #Purdue is a top 25 team, Hope said: "I think we are." Boilermakers receiving votes in AP and coaches polls

My take: Hey, I like this Boilermaker team. But, honestly, what has Purdue done to merit being ranked? It has beaten FCS Eastern Kentucky and a bad MAC team in Eastern Michigan and lost a close game at Notre Dame.