Mark Dantonio: 'I just wanted to get out of there' 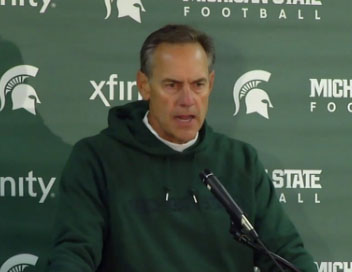 Michigan State's Mark Dantonio joined "BTNLive" Tuesday night, and the head coach was much more talkative than the last time we saw him in front of the camera. Dantonio, of course, conducted a very short postgame press conference (Watch it) following Saturday's lackluster victory over Eastern Michigan.

Why was he a man of so few words. "I just wanted to get out of there, in all honesty," Dantonio told our crew. Watch the full interview now and see our chat with Rex Burkhead in this post.

Here's what else Dantonio had to to say about his presser:

"I just had quick answers, I don't know what the big problem was."

"Some of the questions probably could have been answered with a longer answer, but they were just as easily answered with quick answers."

Burkhead impressed Saturday in his first action since injuring his left knee in the season opener. Watch our interview with the Nebraska running back below: