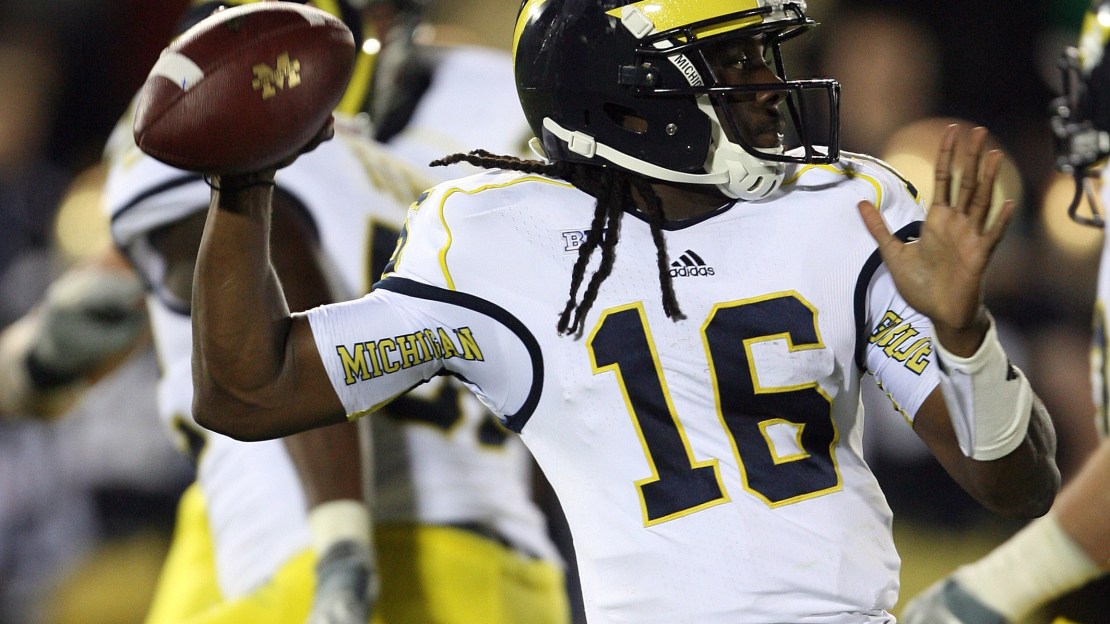 My Monday links include some good and provocative  pieces from my various colleagues in the Big Ten press corps. Here's one: Bench Michigan QB Denard Robinson? Are you serious? It?s an idea that the great Kyle Meinke of MLive.com discusses in this interesting piece. Yes, Robinson has had some tough outings against quality foes-including his recent five-interception effort at Notre Dame. But he?ll still leave Michigan as one of the Big Ten?s best players ever.

But some Michigan fans feel differently. At the least, some fans think Robinson and offensive coordinator Al Borges should take the blame for the loss at Notre Dame in a game that was there for the taking for the Wolverines.

Reality is …: Tim May of the Columbus Dispatch sums up Ohio State thusly: Four wins into the Urban Meyer era, and the Buckeyes are an average team with a great player. But that may be enough to win the Leaders Division.

Sounds about right, doesn?t it?

Gopher down: Minnesota is rolling, off to a 4-0 start. But if the Gophers want to get to 5-0, they likely will have to do without QB MarQueis Gray. Coach Jerry Kill says the senior is unlikely to play at Iowa this Saturday as he recovers from ankle and knee issues.

Then again, Minnesota looked pretty good last week in dispatching Syracuse with sophomore Max Shortell under center. In fact, I sorta like the Gopher offense better with Shortell at the controls.

Tough year: The great Mike Hlas of the Cedar Rapids Gazette offers up his Big Ten power rankings. They always are informative ? and fun! Where is Iowa? It?s not pretty, Herky. Hlas has the Hawkeyes at No. 10. I certainly won?t argue that.

On track, Wisconsin: Tom Oates of the Wisconsin State Journal thinks the Badgers are headed in the right direction, but he wonders if they are ready for the Big Ten.

Wins over FCS Northern Iowa, Utah State and UTEP weren?t impressive. And the 10-7 loss at Oregon State was brutal. But, ready or not, here comes Big Ten action. Up first: A trip to Nebraska, which is thinking revenge after getting hammered 48-17 last year in Madison.

Stay on target: The 52-24 loss to Louisiana Tech hurts. But Illinois? goal remains the same: Win the Big Ten.

Well, in order to do that, the defense that came in advertised as one of the best in the Big Ten needs to tighten. The group was ripped by Arizona State and Louisiana Tech. And the quarterback spot must be sorted out. Will it be Reilly O?Toole or Nathan Scheelhaase?

Husker power: Last year, this entire "Big Ten" thing was new to the Nebraska coaching staff, as it transitioned from the Big 12. Well, this year, the Husker coaches feel much more comfortable as they prep to dig into Year Two in their new home.

Schemes are familiar, as is personnel for each team. Surprises? There will be few if any, as Nebraska aims for its first league title since winning the Big 12 in 1999. In fact, Sam McKewon of the Omaha World-News thinks the Husker?s high-powered offense give them a shot to win the Big Ten.

Learning curve: Purdue has played three games and is 2-1, beating FCS Eastern Kentucky and Eastern Michigan and losing a close game at Notre Dame. The Boilermakers were off last week and play host to Marshall this week. But, what do we know and don?t know about Purdue so far?

Thrown for a loss: Anyone who has seen Michigan State knows the offense has had issues, particularly in the passing game. How can the Spartans clean up those issues with a huge Big Ten opener with Ohio State looming?

Beckman said QB situaton will play out in practice, but who cares if the defense doesn't make huge improvements? #dechr

My take: This basically sums up Illinois? situation. The defense is on the spot with Penn State coming to town.

Here you go: Taylor Martinez is Big Ten's most efficient passer heading into conference play. Conclude what you will

My take: That says that all of that offseason work by Martinez has paid off ? and that there really aren?t any great, NFL style quarterbacks in the Big Ten.

Penn State plays Illinois Saturday (Sept. 29), making it 11 months to day Joe Paterno claimed what was then his last win (409) vs. Illini.

My take: I am not sure what to make of this.

#Northwestern, 4-0 with three wins over major-conference foes, remains unranked in the AP poll.

My take: This is an injustice!

My take: This Marshall attack will be a nice test for a stout Purdue defense. I can?t wait.