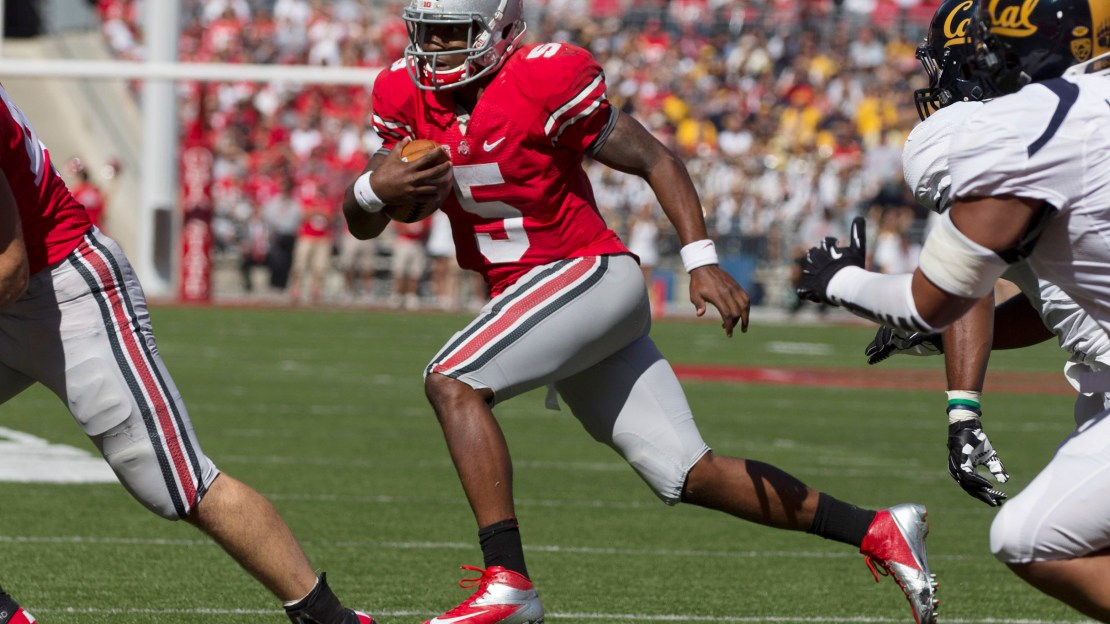 I have a twist on my weekly ?Tom?s Top 10? this week. With non-conference play complete save for two games and Big Ten action set to kick off on Saturday, I take a look at the ?best? of the non-league season. What was the best game of the non-conference season? How about the best performance? And the best moment? Find out below.

1. Best team: Ohio State – No team has really dominated, but Ohio State is the choice. The Buckeyes are on probation and not eligible to win the Big Ten or go to a bowl. Still, they have taken care of business and remain the highest ranked Big Ten team. And, yes: The Buckeyes may have a shot to run the table.

2. Best game: Northwestern 42, Syracuse 41 – This season-opening game was scintillating. The Wildcats blew a 35-13 third quarter lead, watching the Orange take a 41-35 advantage with 2:40 left. But reserve quarterback Trevor Siemian came off the bench and engineered a game-winning drive which was capped with a 9-yard scoring strike to Demetrius Fields.

3. Best performance: Le'Veon Bell vs. Boise State – How about Bell in the season opener vs. Boise State? He ran a career-high 44 times for 210 yards and two scores, as he literally and figuratively carried the Spartans to a 17-13 victory in what was the Big Ten?s most impressive non-conference victory.

4. Best moment: Taylor Martinez's 92-yard scoring run at UCLA – You could go with any number of dizzying runs by Ohio State QB Braxton Miller. But I like Martinez?s 92-yard scoring sprint at UCLA. Yes, the Huskers lost, 36-30, but not because of the effort of T-Magic. He hit 17-of-31 passes for 179 yards and ran 13 times for 112 yards.

5. Best surprise: Northwestern – No doubt, Minnesota moving to a 4-0 has been impressive. But Northwestern gets the nod based on the fact the Wildcats have beaten three schools from AQ leagues: Syracuse, Vanderbilt and Boston College. The rest of the Big Ten beat two AQ schools (Ohio State over Cal and Minnesota over Syracuse). A visit from Indiana is next for the surging Wildcats.

6. Best player: Braxton Miller, Ohio State – This is pretty easy. The sophomore is second in the Big Ten in rushing and fifth in passing for the best team in the conference. Miller has run 67 times for 441 yards and seven touchdowns. He has hit 60-of-98 passes (61 percent) for 754 yards with seven touchdowns and two interceptions.

7. Best coach: Jerry Kill, Minnesota – This looks like a three-man race between Penn State?s Bill O?Brien; Minnesota?s Jerry Kill; Northwestern?s Pat Fitzgerald. You also could make a case for Ohio State?s Urban Meyer. But Kill is my guy. Coming off a 3-9 debut in 2011, Kill has the Golden Gophers at 4-0 and thinking big as the program aims for its first bowl since 2009.

9. Best freshman: Deion Barnes, Penn State – There have been some good ones, including Nebraska RB Imani Cross; Ohio State DT Adolphus Washington; Illinois RB Josh Ferguson; Indiana OT Jason Spriggs; Penn State TE Kyle Carter; Michigan TE Devin Funchess, among others. But Barnes has been a revelation off the edge for the Nittany Lions. The redshirt freshman has four tackles for loss and two sacks for a Penn State defense that has played well the last two weeks in victory.

[RELATED: What Dienhart learned in Week 4]

10. Best bet to meet in the Big Ten title game: Michigan State vs. Wisconsin – I am going to go with a rematch of last year?s inaugural event. The Spartan defense will keep the team afloat while the offense finds a passing game. And the Badgers may be turning a corner on offense with Joel Stave now at quarterback.