Dienhart: What a depressing non-con season 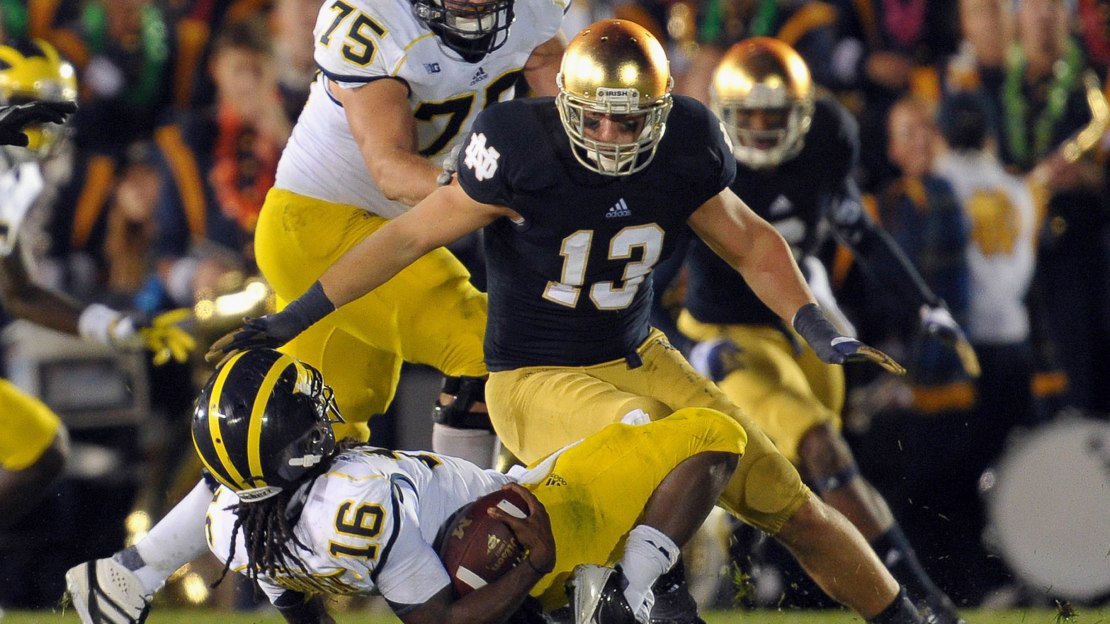 Another big game, another loss by the Big Ten. And so it has gone the first four weeks of what has been a black-and-blue season for the Big Ten.

This Saturday saw Michigan lose at Notre Dame; Iowa fall at home to Central Michigan; Illinois get hammered at home by Louisiana Tech. All of the dubious losses acted as a de facto black bow on a depressing non-conference season for the Big Ten.

While losses by Iowa and Illinois today were downers on this day, Michigan was the school that was carrying the Big Ten?s banner. The game at Notre Dame was the last big non-conference game for the Big Ten. It was the conference?s last chance to score a modicum of national respect.

Knowing all of that is why Michigan?s 13-6 loss tonight under the Golden Dome is so depressing.

This game was over at halftime, for all intents and purposes. Michigan outgained Notre Dame through two quarters, 120-111, and led in time of possession. But on the night of his 22nd birthday, Denard Robinson tossed four interceptions-and Michigan had five–as the Wolverines trailed 10-0 at intermission.

The score probably should have been worse, given the miscues on some vexing passes by Robinson. And the halfback pass by Vincent Smith in the red zone that was intercepted also was a curious call.

In the end, Michigan out gained Notre Dame, 299-239, and converted 8-of-15 third downs. But the Wolverines were doomed by six turnovers—all interceptions, with five by Robinson.

This is just the latest installment of what has been an ugly Big Ten non-conference season.

There have been three losses to MAC teams-Penn State to Ohio; Indiana to Ball State; Iowa to Central Michigan. And there was a bloody Saturday when the Big Ten went down hard vs. the Pac-12. Wisconsin was dumped at Oregon State; Illinois was ripped at Arizona State; Nebraska was embarrassed at UCLA.

And, who can forget Michigan?s 41-14 flop vs. Alabama in Arlington, Texas, to open the season?

Even many of the wins have been frustrating. Did you see Mark Dantonio's postgame press conference today? Yeah, I don't think he wanted any part of that Q&A.

If you look really close, though, you?ll find a positive or two. The most impressive non-conference victory for the Big Ten was-Are you ready for this?-Michigan State?s 17-13 season-opening win over Boise State.

In fact, you need only one hand to count the Big Ten?s wins over schools from AQ leagues. And Northwestern has three of them (Syracuse, Vanderbilt, Boston College). The others were Ohio State beating Cal, and Minnesota dumping Syracuse tonight.

Soon, this all will end. The non-conference schedule is almost over. Purdue plays host to Marshall this coming Saturday, while Indiana plays at Navy on October 20.

Next week, conference action begins in earnest. Which means all of the fighting will be in-house. Perhaps some new reputations will be formed in the coming eight or so weeks. Some teams will forge new images as they stack up victories and subsequently climb the polls.

One or two teams likely will go 7-1 of 6-2 in league action and notch double-digit wins. Then, the Big Ten will get a chance in the bowl season to prove itself again vs. other leagues.

It?s just too bad that Ohio State is ineligible for the postseason, as the Buckeyes look like the best team in the Big Ten. I still think Michigan and Michigan State have the best chances to finish strong among the bowl eligible Big Ten teams and redeem the league in the postseason.

[VIDEO: Watch all of our Week 4 highlights]

Michigan is off next week before opening Big Ten play at Purdue. The Wolverines played well enough on defense tonight to win. The offense figures to play better as wideout Devin Gardner and true freshman tight end Devin Funchess continue to develop. And Robinson is too good not to bounce back from tonight?s disappointing effort, which saw the senior hit 13-of-24 passes for 138 yards and run 26 times for 90 yards.

Michigan State remains dangerous because of its defense. The Spartans allowed just 183 yards today vs. Eastern Michigan after entering the day with the No. 1 defense in the Big Ten. But the offense? It looks like a mess. Can MSU pass the ball? The Spartans, by the way, open Big Ten play next week by playing host to Ohio State in what could have been a preview of the Big Ten title game had the Buckeyes not been on probation.

So, while the start to the season looked bleak, there?s still a chance for a strong finish for the Big Ten. Really.