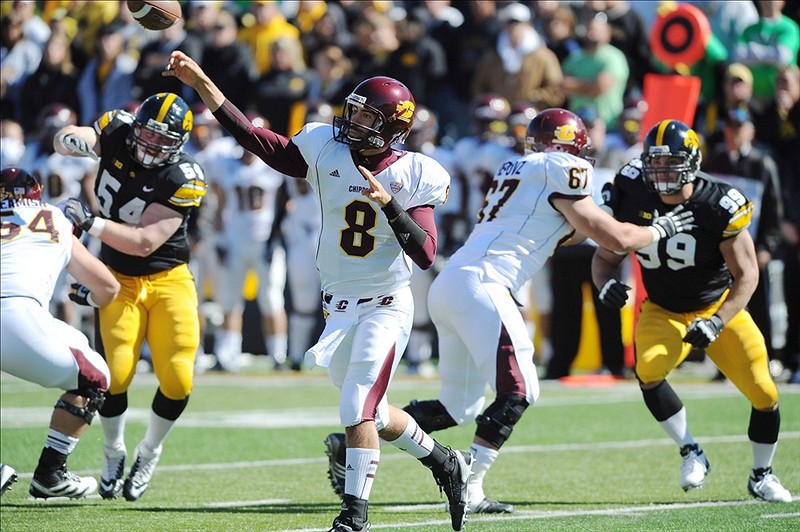 Central Michigan (2-1) pulled within 31-29 on Ryan Radcliff's 13-yard TD throw to Titus Davis. The Chippewas failed on the two-point conversion, but they recovered an onside kick and moved to Iowa's 30-yard line in part because of a personal foul on the Hawkeyes (2-2).

Trailing 31-29, Central Michigan recovered an onside kick with 45 seconds to go after an odd sequence. After the ball blew off the tee twice, the Chippewas tried their first onside kick but did not recover the ball. However, Central Michigan was called for a delay of game on that first kickoff play. And so the Chippewas had to kick it again, an the second time they recovered it.

With the wind at their back, Central Michigan's offense then drove late and attempted a career-long 47-yard field goal for kicker David Harman. After an Iowa timeout to freeze the kicker, Harman made the kick with three seconds to go.

The Chippewas and Iowa traded the lead all game long. There were six lead changes in the game before Central Michigan ended up on top for good.

Ryan Radcliff and Titus Davis had a passing connection going, as Davis racked up 74 yards and two touchdowns on five catches en route to a win for the Chippewas.

Home run plays keyed Central Michigan's scoring attack. The Hawkeyes' defense gave up four plays of at least 20 yards. With 14:09 to go in the fourth quarter, Zurlon Tipton rushed 32 yards for the Chippewas' biggest gain of the game. Despite the highlight, Central Michigan failed to score on that drive, which stalled at the Chippewas' own 39-yard line.

Iowa's James Vandenberg was good for 213 yards during the game, completing 16 of 25 passes. Vandenberg finished the game with one touchdown and no interceptions. Keenan Davis was a key target for Vandenberg. He hauled in six catches for 88 yards.

The Hawkeyes racked up 428 total yards. In addition to Vandenberg's efforts through the air, Iowa also rushed 28 times for 215 yards.

Radcliff threw for 282 yards while completing 26 of 34 passes for Central Michigan. Radcliff finished the game with two touchdowns and no interceptions. Radcliff had a good connection with receiver Cody Wilson. He hauled in eight catches for 106 yards.