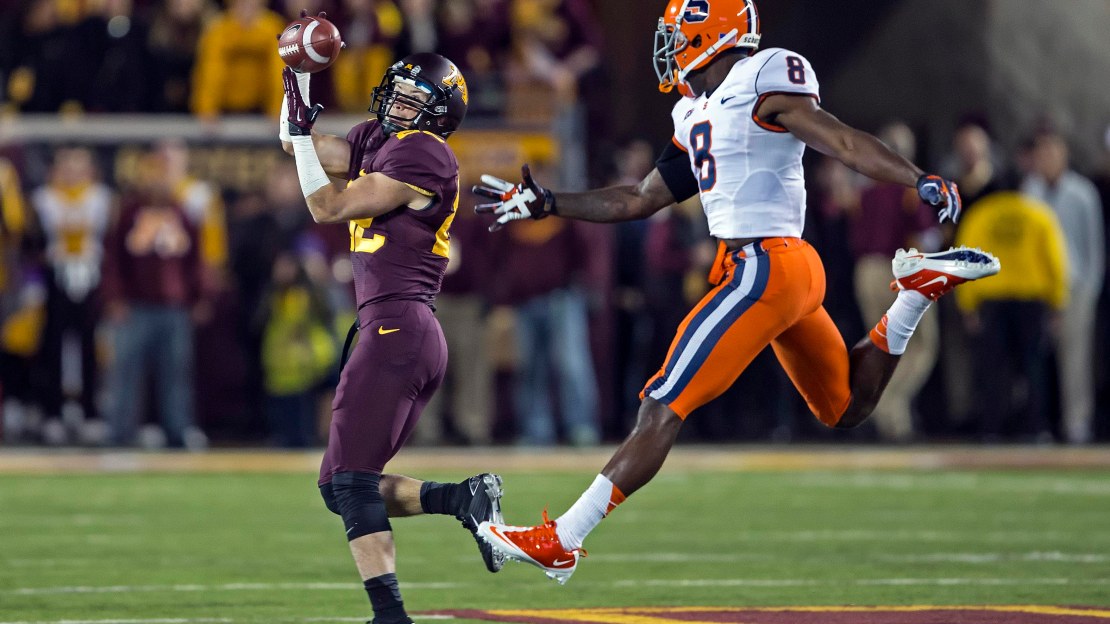 Minnesota got things going through the air, passing for 91 yards in the quarter, and the Golden Gophers lead 7-3 at the end of the first quarter. Minnesota scored when Donnell Kirkwood ran two yards to paydirt to put the finishing touches on a five-play, 58-yard drive, giving the Golden Gophers the game's first lead. The key play on Minnesota's drive was Antonio Johnson's 40-yard pass to Devin Crawford-Tufts.

Syracuse polished off a 67-yard drive when Ross Krautman drilled a 33-yard field goal to make the score 7-3. The Orange drove across midfield after Ryan Nassib's 24-yard pass to Alec Lemon from the 27-yard line.

The Golden Gophers will start the second quarter with the ball at Syracuse's 42-yard line.

Why you should watch: The Golden Gophers are one of just three Big Ten unbeatens. But this will be Minnesota?s toughest test by far. Northwestern won a shootout with Syracuse to open the season. And the Gophers may have to do the same. Is the offense capable of that if it happens?

Keep an eye on: QB Max Shortell. He came on for an injured MarQueis Gray last week and looked good in victory over Western Michigan. The sophomore has a big arm, meaning coaches may lean on the pass more with under center than they would have with Gray. But the o-line must protect Shortell, who lacks Gray?s mobility and elusiveness.

Key matchup: Syracuse QB Ryan Nassib vs. Minnesota secondary. Nassib directs the No. 3 pass offense in the nation (379.7 ypg), already tossing nine touchdown passes. The Gophers? rank second in the Big Ten vs. the pass (162.7 ypg) and have five picks after making just four all of last year. This will be a big test for guys like Derrick Wells, Troy Stoudermire and Michael Carter in the Gopher secondary.

Key number: 199.7, rushing yards allowed per game by Syracuse. That is last in the Big East and 97th in the nation. What?s it mean? The Orange could see a steady diet of Donnell Kirkwood and the other Gophers running backs, which would wear down a bad Syracuse defense and keep the high-powered Orange offense on the sideline.

Key note: Minnesota has eight sacks in three games. It had 22 all of 2011. End D.L. Wilhite has been a force off the edge with 3.5 sacks and 4.5 tackles for loss for a defense that has gotten speedier and thus more aggressive.