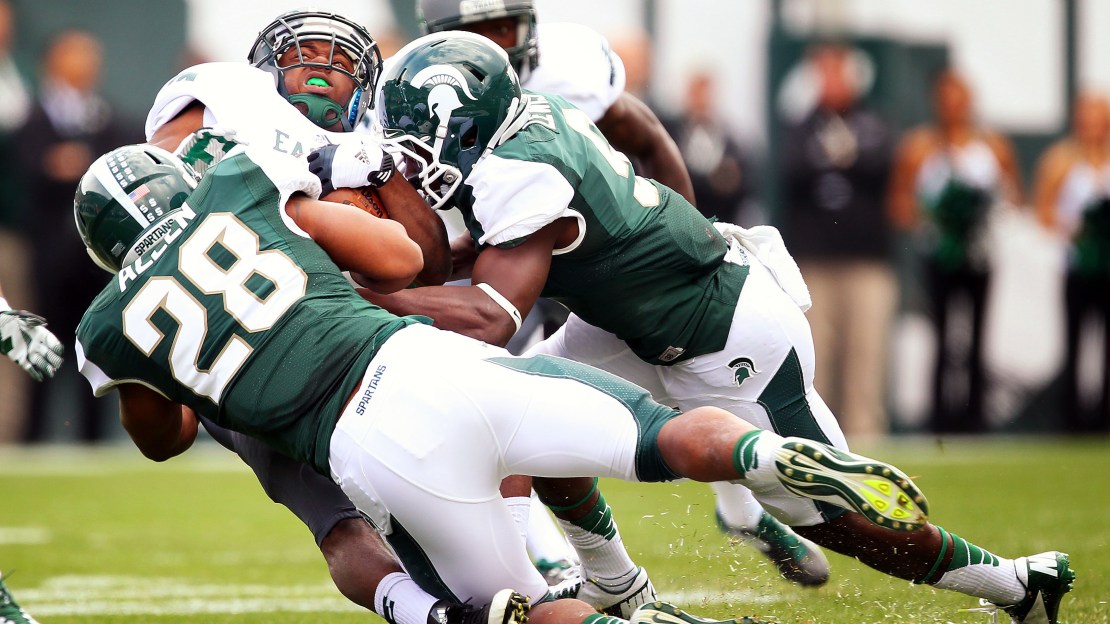 The two teams combined for more punts than points in a slow first quarter and the game is tied 0-0 at the end of the first quarter. With neither team able to move the ball, there were four punts in the quarter.

No. 20 Michigan State has the ball at its own 21-yard line to begin the second quarter.

Now, let's look at what Dienhart says about this game.

Why you should watch: How will the Spartans respond coming off an ugly 20-3 home loss to Notre Dame in which the offense struggled mightily? The good news: Eastern Michigan is horrible. MSU didn?t even reach the red zone vs. the Fighting Irish, scoring only on a 50-yard field goal.

Keep an eye on: The offensive line. It must play better. Quarterback Andrew Maxwell-who is playing better than many think-was harassed often and sacked four times last week by ND. The unit is a bit banged up with tackle Fou Fontoi (foot) out but must step it up.

Key matchup: Le?Veon Bell vs. the Eastern Michigan front seven. When all else fails on offense, Michigan State can turn to Bell. He could enjoy a huge day vs. a soft Eastern Michigan defense that ranks 116th in the country. Bell needs 90 yards to become the 16th MSU player with 2,000 career yards rushing. The Spartans need a big offensive effort to restore confidence coming off the program?s fewest points tallied in a home game since a 20-3 loss to Central Michigan in 1991.

Key number: 8, number of drops by Michigan State receivers last week vs. the Fighting Irish. The unit needs to hang onto the ball, especially Bennie Fowler, who didn?t make a catch last week and dropped a pass in the end zone.