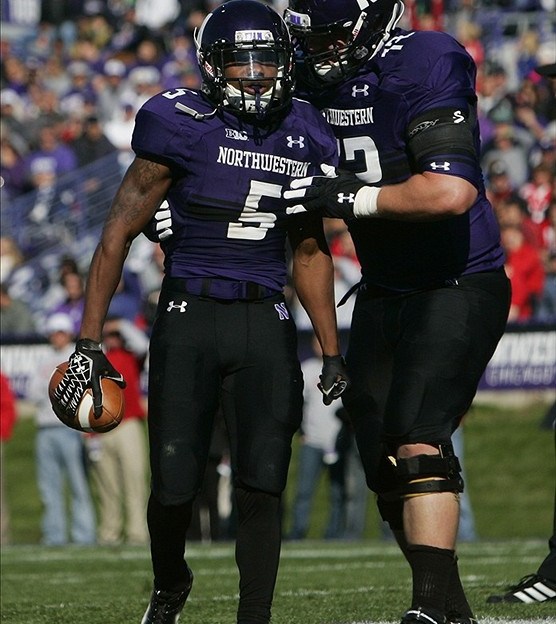 Venric Mark ran for 117 yards and three touchdowns to lead Northwestern to an easy 38-7 victory over South Dakota on Saturday afternoon. This one figured to be a breather for the Wildcats (4-0), and that's exactly what it was. They barely broke a sweat against a FCS opponent after tight victories over Syracuse, Vanderbilt and Boston College, building a 28-0 halftime lead with Mark going off for 97 yards and doing all his scoring.

The only real scare for Northwestern came when Kain Colter took a hard hit from South Dakota's Chris Frierson at the end of a 10-yard run rather than slide. He spent most of the first quarter on the sideline with a wrist injury but finished with 46 yards passing and 38 rushing.

Running back Mike Trumpy, meanwhile, sat out the first half and ran for just 10 yards, after going for 106 and a touchdown the previous week from Boston College. But with Mark leading the way, Northwestern had its way in this one.

FINAL: Venric Mark broke out against South Dakota piling up 117 rushing yards and scoring three touchdowns to lead Northwestern to a 38-7 victory on Saturday at Ryan Field.

The Wildcats' offense dominated as the Coyotes' defense gave up four plays of at least 20 yards. With 14:30 to go in the first quarter, Mark rushed 46 yards, Northwestern's biggest gain of the game. Later in the drive, Mark pounded in a three-yard touchdown run, which gave the Wildcats a 7-0 lead.

Josh Vander Maten threw for 189 yards while going 17-33 for South Dakota. He threw no interceptions. Vander Maten also ran for 38 yards and one touchdown on nine attempts. Terrance Terry was a key target for Vander Maten. He hauled in five catches for 66 yards.

The Coyotes racked up 242 total yards. In addition to Vander Maten's efforts through the air, South Dakota could only muster 53 yards rushing on 23 attempts.