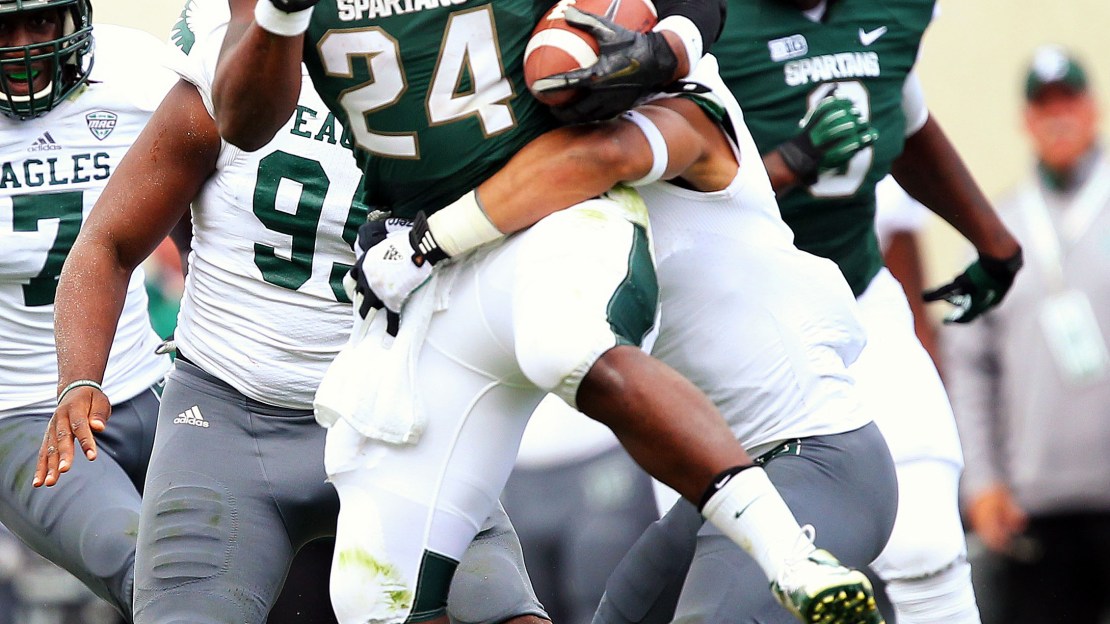 Le'Veon Bell rushed for a career-high 253 yards and a touchdown to help stagnant Michigan State avoid a major upset with a 23-7 win over Eastern Michigan on Saturday. Dan Conroy kicked three field goals for the No. 21 Spartans (3-1), who failed to score a TD for more than seven quarters until Andrew Maxwell hit tight end Dion Sims on a 10-yard pass with 7:19 left.

Michigan State struggled mightily through most of its final tuneup for next week's Big Ten opener against unbeaten Ohio State. But Maxwell finally found Sims three times for 73 yards in the fourth quarter.

The Spartans finished with a 428-183 edge in total offense over the Eagles (0-4), who came as close they ever have to beating a ranked opponent.

FINAL: Le'Veon Bell broke out against Eastern Michigan, piling up 253 rushing yards and scoring one touchdown to lead No. 20 Michigan State to a 23-7 victory on Saturday at Spartan Stadium. Michigan State had four plays of 20 yards or more on its way to victory. With 1:29 to go in the fourth quarter, Bell rushed 40 yards for the Spartans' biggest gain of the game.

The Eagles' ground game was halted by Michigan State's impenetrable defense. The Spartans sealed the running lanes, and Eastern Michigan ended up gaining only 43 yards on the ground.

Michigan State's Andrew Maxwell was good for 164 yards during the game, completing 16 of 29 passes. Maxwell finished the game with one touchdown and no interceptions. Maxwell had a trusted receiver in Dion Sims. He caught six passes for 112 yards and one touchdown.

The Eagles' Tyler Benz went 13 of 26 through the air for a total of 137 yards. Benz finished the game with one touchdown and no interceptions. Benz looked for Garrett Hoskins often. He hauled in eight catches for 102 yards.