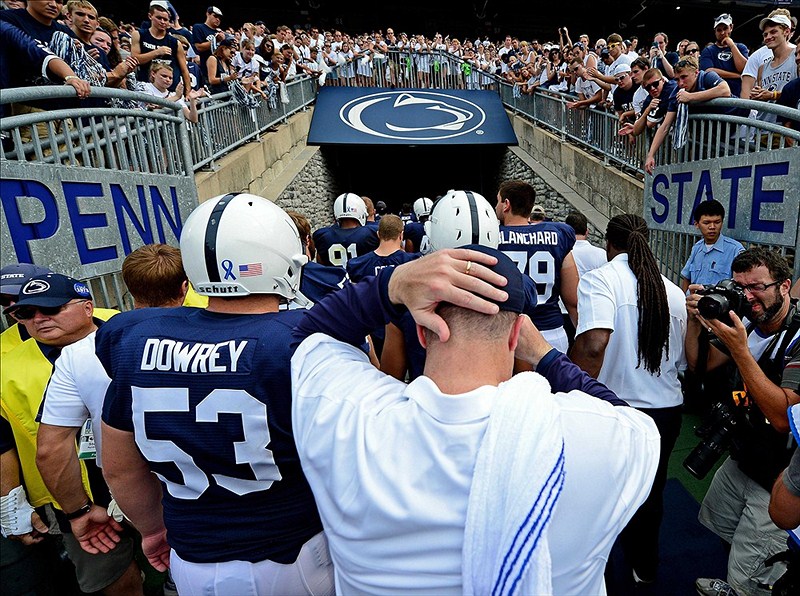 If Penn State is going to have any shot for success in the future, it will need a strong walk-on program. Bill O?Brien recently conducted walk-on tryouts, and the turnout was good. O?Brien estimated that about 65 people tried out at the recent work out. I think the Nittany Lions may find some players who could help the program down the road in a football-mad state that produces a lot of good prospects. That's the first of my Friday links – read the rest of this post for more.

There's also a good Associated Press story on Penn State's scholarship situation and the impact a variety pf walk-ons could have on it. As the AP reports:

Penn State, like other schools, also have "preferred" or "invited" walk-ons. Generally, such players are typically considered good enough to be recruited and compete for a roster spot, but don't get a scholarship right away. For instance, (Matt) McGloin arrived at Penn State as a preferred walk-on before going on scholarship the next season.

Lookalikes: Michigan will be challenged to win at Notre Dame. But one edge the Wolverines will have is the fact that they see a spread offense similar to the Fighting Irish?s in practice every day.

Also, the Irish offense basically will be the same as the UMass attack that Michigan played last week, as the Minutemen are led by former Notre Dame offensive coordinator Charley Molnar. Hey, Michigan will take any edge it can get in the Big Ten?s last chance to score an impressive non-conference victory.

Hold on: Wisconsin has a new quarterback. And his name is Joel Stave, a redshirt freshman who played the second half against Utah State last week. Why does Bret Bielema like Stave? He protects the ball.

The starter the first game, Danny O?Brien, didn?t protect the ball. The Maryland transfer has committed three turnovers and had an interception overturned by a penalty and a fumble that Wisconsin recovered, so it could have been worse. This all makes you appreciate Russell Wilson even more, doesn?t it?

Grateful Hawkeye: Iowa linebacker Anthony Hitchens has been one of the Big Ten?s surprise players, pacing the league in tackles. He?s also one of the conference?s feel-good stories. During a rough period as a seventh grader, he was taken in by another family that helped raise him. Think ?The Blindside.? The Anderson family helped Hitchens get on track; and it?s something he never will forget.

Days of the week; There is a pace and rhythm to each week. And at Ohio State, some of the days have a name. There?s ?Bloody Tuesday,? when the work is intense. But Friday is dubbed ?The Best Friday in Football.?

Fridays include games for the players, movies and snacks all after a nice meal. Long meetings sometimes used to be part of Fridays. But no more. It?s all about winding down. Friday is a ?payday? of sorts for all the hard work put in earlier in the week. And Saturday? It?s an even bigger payday.

In a bit of good news/bad news, Nebraska has welcomed back defensive tackle Chase Rome, who left the squad to tend to some personal issues. But offensive tackle Tyler Moore is gone for good after leaving the team in camp and intends to transfer to Florida.

Long process: The great Lore Tate of the Champaign News-Gazette says it will take time for the Fighting Illini to win back fans.

But that?s just one of Tate?s concerns this week. His others? Will quarterback Nathan Scheelhaase and some of his bang-up teammates play? Do fans realize how dangerous of a foe that Louisiana Tech is? Can the strong Illini defense control the frenetic tempo of the Bulldog attack? Let?s all say it together: ?upset alert.?

You feel that? It?s a sense of urgency. And Northwestern defensive lineman Brian Arnfelt is feeling it, as his career is quickly coming to a close. That?s why he?s making the most of what could be a big senior season for him and the Wildcats, who are 3-0 and thinking big.

My take: This obviously would be good news. The Illini are going to need to score some points if they want to avoid the upset vs. Louisiana Tech.

Not sure exactly where Kill's team is at this point myself, especially with Gray's injury. How the Gophers play on D will say a lot.

My take: Yes, I will be interested to see how Minnesota performs on defense vs. a Syracuse attack that has the No. 3 passing offense in the nation.