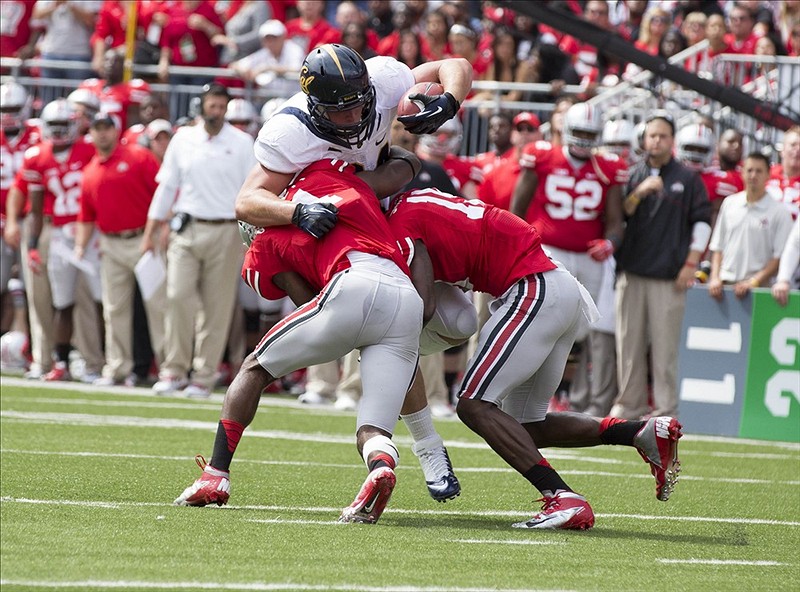 Ohio State is blitzing more. Michigan wants more sacks, too. Michigan State needs receivers and Iowa welcomes a soft spot in the schedule. And what price does a coach pay in recruiting battles? Wisconsin's Bret Bielema gives his take. Check out these headlines and more in my daily links.

On the attack: How does a defense pack more punch? That?s easy. Crank up the blitz pressure. In fact, that?s what Ohio State is doing.

It worked last week against Cal as the Buckeyes notched six sacks after Ohio State had issues getting to the quarterback. But, the defense still showed some vulnerability when it came to stopping the run and giving up big plays in a game against the Golden Bears that was much too close.

Redshirting: If a freshman hasn?t played for Penn State by now, he doesn?t figure to see any action this year.

It will be interesting to see how many freshmen Bill O?Brien can redshirt, given some of the depth issues. One guy I will be surprised to see get as redshirt is running back Akeel Lynch, one of the team?s most talented freshmen. But, the Nittany Lions have decent depth at the position. Penn State has a special player in Lynch. He certainly would benefit from a year on the sidelines. But can an offense with few playmakers afford to not play him? Hmmm.

Missing pressure: Where is the Michigan pass rush? It has been MIA. In fact, the Wolverines rank ninth in the Big Ten in sacks, averaging one per game.

A line that is shuffling has been at the root of the pass-rushing woes. But the unit needs to pick it up beginning this week at Notre Dame. A big key to any hope Michigan has for victory rests with forcing young Irish quarterback Everett Golson into mistakes. And nothing causes mistakes better than pressure from a defensive line. Frank Clark and Jake Ryan have done their part, but they need help.

Fixing time: It?s no secret that the Michigan State receivers are having their issues. In the loss to Notre Dame, there were eight drops. And none was more key than Bennie Fowler?s drop in the end zone. The offensive line also suffered through a sub-standard effort vs. Notre Dame.

This all is a bit of a shock when you consider the unit was supposed to be a strength with eight players returning with starting experience. Alas, Michigan State ranks just ninth in the Big Ten in rushing. And quarterback Andrew Maxwell seemingly was under constant duress against Notre Dame. A spotty offense could undermine what could be a special season in East Lansing.

What lies ahead? Randy Peterson of the Des Moines Register looks at five questions facing Iowa as it preps for a visit from Central Michigan.

Don?t expect much of a test from CMU, which is one of the worst programs in the nation. This is a nice time for the Hawkeyes to work on that passing game that has yet to produce a touchdown in 2012. And I say don?t playing running backs Damon Bullock and Greg Garmon as they come off injuries. Save the duo for the start of Big Ten play next week and let Mark Weisman-my new favorite player–carry the load again.

Let's get moving: The struggles of the Wisconsin ground game are well documented. The Badgers rank 11th in the Big Ten in rushing (119.7 yards per game), which is unheard of at this ground-pounding school. As you would suspect, the line has taken its blunt of blame to the point where the unit?s coach already has been fired. But the tight ends and fullbacks also must share in the burden of the struggling rushing attack.

Three line starters had to be replaced. But the loss of tight end Jake Byrne also was huge. Ditto fullback Bradie Ewing, who was an NFL draft pick. Tight end Brian Wozniak and fullback Derek Watt remain works in progress. But, they are improving. And there?s still time for this to be a special season. But it has to start now.

Lonely job: On the subject of Wisconsin, Bret Bielema says nothing ruins friendships like recruiting battles. Competing for the interest of 18-year olds is tough business. Glad I?m not in it.

Now the question is, have the Buckeyes become more sure tacklers in the running game? Answer comes vs. UAB.

My take: I guess I?m not sure you can draw any conclusions based on a game vs. UAB. UAB? UAB! UAB?!

My take: If you could see me right now, I am slowly shaking my head side to side in amazement.

My take: In other news, Hoke thinks water is wet.