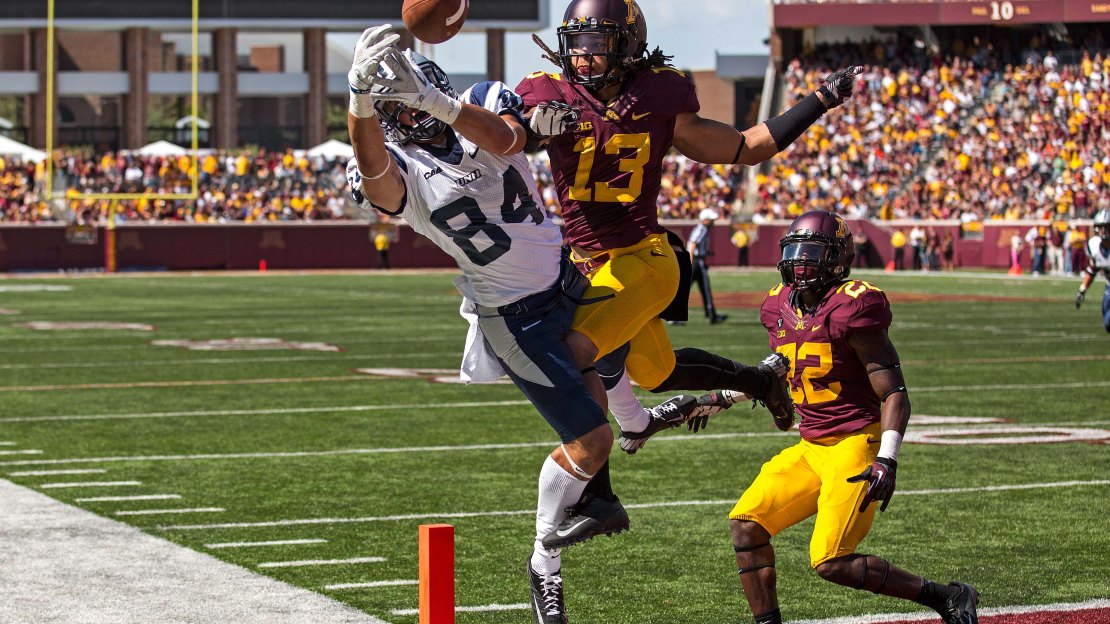 Minnesota has been one of the pleasant surprises in the Big Ten, notching a 3-0 start that has fans thinking the Golden Gophers have a good chance to play in a bowl for the first time since 2009.

Compounding matters was a turnover margin that was last in the conference.

But all of that has changed in 2012, Jerry Kill?s second season in charge. And major player in the defensive transformation has been safety Derrick Wells.

The 6-1, 198-pound sophomore from Lehigh Acres, Fla., has been a revelation for a Minnesota defense that ranks third in the Big Ten in total defense (293.3 ypg), allowing 130.7 yards per game on the ground (eighth) and 162.7 yards per game through the air (second).

Wells paces the team with two interceptions, as the Gophers have already picked off five passes. Last season, Minnesota had just four interceptions. Foes are averaging a Big Ten-low 8.3 yards per completion. Wells also leads the team in tackles (26), passes broken up (five) and passes defensed (seven). It?s doubtful any Big Ten defensive back is off to a better start.

I caught up with Wells as the Gophers prepped to play host to Syracuse, which has the No. 3 passing offense in the nation (379.7 ypg) and will be a big test for the Minnesota defense.

[Related: Read all of Dienhart's Q&A's]

Q: Are you surprised the secondary is playing as well as it is?
A: Week in and week out, we have a game plan that we think will work. We know we can play with the teams we are competing against. So far, so good, as we have played well against some good teams. We are communicating well and limiting mistakes. We need to keep it up.

Q: What has been the biggest difference for you between your freshman and sophomore seasons?
A: Moving from corner to safety has been big, switching and learning a new position. It has been a challenge.

Q: Is that a move you wanted to make?
A: Nah. But last spring, the coaches called me in and had a talk with me about moving. And I wanted to do what was best for the team. If it meant moving to safety, that?s what I was going to do. I have enjoyed the transition and think I?m getting better each day. That?s the goal.

Q: What do you like about playing safety?
A: In our defense, the safety is like the quarterback of the defense. We make the calls. And I like to be in charge.

Q: How big was that UNLV game? You picked off two passes and made a team-high eight tackles en route to being named Big Ten Defensive Player of the Week in your first career start.
A: That game was special. The defense played well in that game (30-27 triple overtime victory). On the first (interception), I made a play on the ball and got it. On the second one, there was a corner blitz that got some pressure on the quarterback. The quarterback threw it up and I made a play on it. I never will forget it.

Q: Why do you think the defense has improved so much?
A: I think we have the mind-set that we are the underdog each week and we are buying into the program that Coach Kill is building here. We just try to play hard and get a ?W.?

Q: How did you get out of Florida?
A: I had some high school coaches who coached with some of the guys up here, they had a good connection. So, I came up here and really liked it and committed.

Q: Who is the best cover man in the secondary?
A: I can?t really say that. We all are pretty good.

Q: Who is the best hitter?
A: I can?t tell that, either. We all can hit and make plays. We all tackle better than we did last year. That?s why we have improved so much.

Q: Who have been some of the leaders on defense?
A: (Linebacker) Mike Rallis, (linebacker) Keanon Cooper, (defensive back) Troy Stoudermire, (defensive tackle) Ra?Shede Hageman, those guys.

Q: What type of coverages do you usually play?
A: We switch it up a lot, trying to confuse offenses ? man and zone. We also bring the blitzes, too.

Q: What?s it like to play for Coach Kill?
A: He?s a great guy. Always trying to make us better.