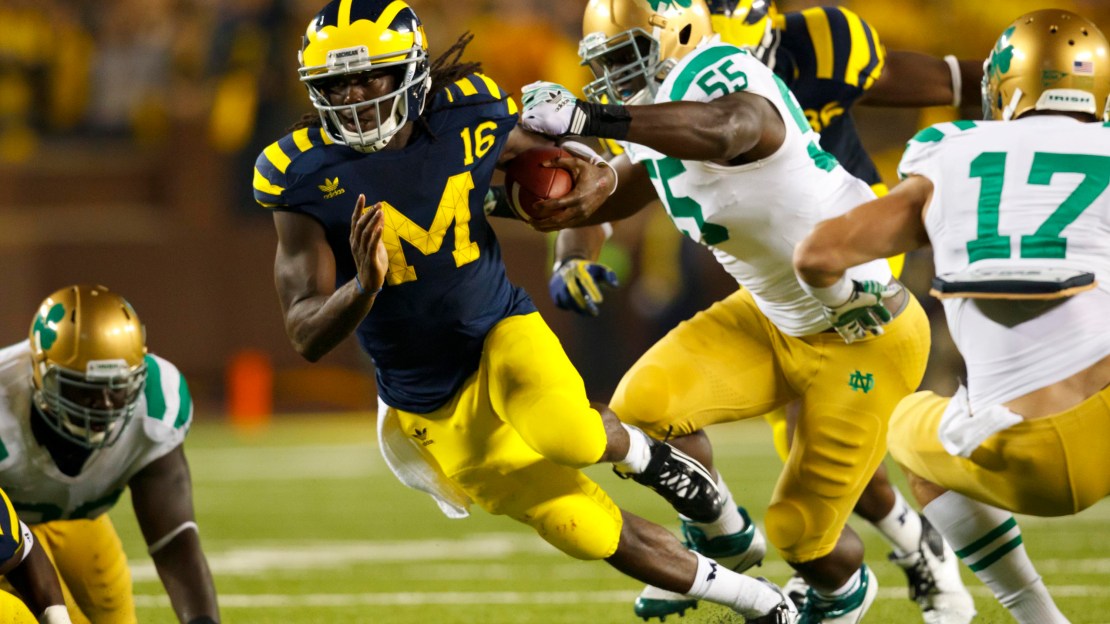 But, most noteworthy of all: The Big Ten lost its biggest game of the weekend, with Michigan State falling at home to Notre Dame, 20-3. That casts doubt on the Big Ten?s ability to compete for the national championship.

But, a new week brings new hope. This week?s lineup of games is loaded with innocuous matchups that won?t stir your blood, much like last Saturday. But there is one biggie, one matchup that will have the nation?s attention: Michigan at Notre Dame. This is the Big Ten?s last marquee non-conference game, its last chance to score some much-needed cred.

Following is my look at the Best of Week 4:

BEST GAME: Michigan at Notre Dame. Who can forget last year?s game in Ann Arbor? It was an epic 35-31 Wolverine triumph that saw Michigan take a 28-24 lead with 1:12 left; Notre Dame responded with a touchdown to take a 31-28 lead with 30 seconds remaining before Denard Robinson found Roy Roundtree for a 16-yard touchdown pass with two seconds left to steal the victory. Robinson completed just 11 passes, but they went for 338 yards (30.7 yards per completion) and four scores to offset 513 yards by ND. Whew!

BEST MATCHUP: Michigan QB Denard Robinson vs. Notre Dame linebacker Manti Te?o. Robinson is one of the most dangerous players in the nation, a true one-man gang who is capable of scoring each time he touches the ball. Te?o is coming off an emotional week in which his Irish allowed only 237 yards in a huge 20-3 at Michigan State following the deaths of a grandmother and girlfriend. The senior leads the Irish and ranks 35th in the nation in tackles, averaging 10.0. Watch this matchup closely. The last time Robinson played in South Bend, he notched a school-record 502 yards of total offense, running for 258 yards and passing for 244 in a 28-24 win.

PLAYER ON THE SPOT: Minnesota QB Max Shortell. He took over after MarQueis Gray went down with an injury in the second quarter of last week?s 28-23 win over Western Michigan. And Shortell looked good, hitting 10-of-17 passes for 188 yards, three touchdowns and an interception. The Orange defense ranks just sixth in the Big East (364.3 ypg) but is No. 2 vs. the pass (164.7 ypg). Shortell may be playing for the next three or four weeks, so the 6-6, 237-pound sophomore must excel to keep the Gophers on track following their 3-0 start.

KEEP AN EYE ON: The Illinois defense. Louisiana Tech ranks No. 3 in the nation in scoring with a 56-point average. The Bulldog passing game is No. 17 (314.5 ypg) in the nation and the offense overall ranks fifth in America (603.5 ypg). The Illini defense-No. 7 in the Big Ten vs. the pass (204.0 ypg)–is good, but it will get a nice test from Sonny Dykes? attack. Tech QB Colby Cameron has seven touchdown strikes and no picks, hitting 69 percent of his attempts. Are you ready, Terry Hawthorne, Ashante Williams, Michael Buchanan, Akeem Spence and Jonathan Brown?

BEST COACHING MATCHUP: Michigan?s Brady Hoke vs. Notre Dame?s Brian Kelly. This is a huge game for Hoke, as the jury remains out on the Wolverines after a 2-1 start. Hoke is a master motivator who is helped by a great staff. Oh, and he?s 1-0 vs. Kelly and Notre Dame. Kelly has the Irish rolling in his third year in South Bend, coming off an impressive win at Michigan State. The Notre Dame offense remains strong. It?s a quick and athletic defense that has made this a potentially elite Fighting Irish squad.

[BTN Connect: Join the conversation and see who's trending]

BEST QUARTERBACK MATCHUP: Michigan?s Denard Robinson vs. Notre Dame?s Everett Golson. Each is similar. Robinson, a senior, has run 40 times for 351 yards and four touchdowns (8.8 ypc). He also has hit 41-of-75 passes for 699 yards with six touchdowns and four picks. Golson, a sophomore, has hit 47-of-81 passes for 611 yards with three touchdowns and a pick. But he has run 20 times for minus 11 yards. Each has lots of speed and skill. This is gonna be fun.