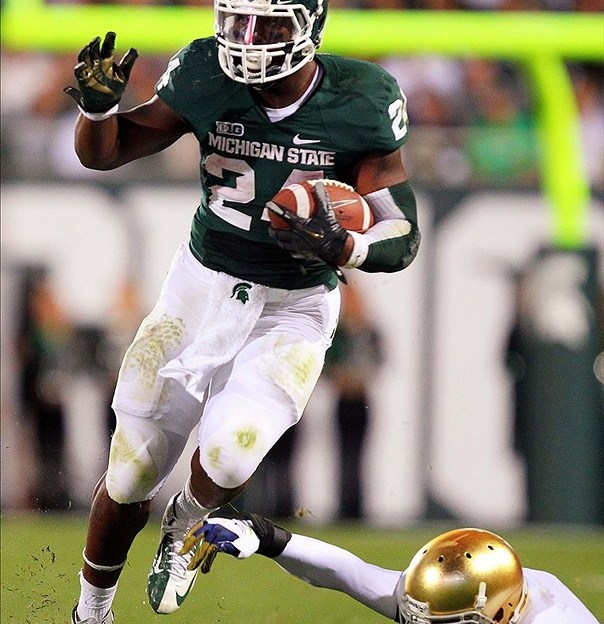 But after a 20-3 loss at home to Notre Dame, the Spartans? big dreams may be dashed. And the Big Ten may be relegated to the back burner of national relevance-again.

Add Michigan State?s disappointing loss to the pile of Big Ten disappointment this year. The league has just four wins over Automatic Qualifying Conferences schools in 2012. And three of those are by Northwestern, which has opened with victories over Syracuse, Vanderbilt and Boston College. The other AQ win? Ohio State?s triumph over Cal today.

No really impressive wins. In fact, the most impressive win of the season in the Big Ten has been Michigan State?s season-opening triumph over Boise State.

Michigan will get a crack at Notre Dame next Saturday in South Bend.

It?s difficult to say the Big Ten got a modicum of redemption today by going 10-2. The wins came over teams from places like the Sun Belt, MAC, WAC, independent ranks and FCS ranks. Not really impressive. And there was a loss to a MAC team (Ball State over Indiana).

Wisconsin?s 16-14 win over Utah State almost felt like a loss, as the Badgers only escaped with a victory after the Aggies blew a 37-yard field-goal attempt in the waning moments that would have won the game.

But, most important and relevant of all, the Big Ten failed to win the biggest game it played on this day-further washing away any feel-good vibe from the Saturday.

The Spartan offense never got on track tonight vs. a speedy and athletic Fighting Irish defense, notching only 237 yards.

The jury remains out on Andrew Maxwell and the Spartan passing game. It looked good last week, but that was against Central Michigan. This was Notre Dame. On this night, Maxwell hit 23-of-45 passes for 187 yards.

He certainly didn?t get much help from his line. It seemed every time Maxwell dropped to pass, the junior was being harassed. He was sacked four times and generally had players in the face all night.

Big plays? They just weren?t there for Michigan State, as Notre Dame notched its first victory in East Lansing since 2006, moves to 3-0 and starts dreaming big in a week in which the school announced it was joining the ACC. The longest run was 15 yards; the longest pass with 23. And the lone points came on a 50-yard field goal.

Now, the only Big Ten teams that are unbeaten are Ohio State and Northwestern. Of course, the Buckeyes aren?t eligible to win the Big Ten or go to a bowl. And while the Wildcats have impressed in opening 3-0 for the third time in the last five years, they aren?t a nationally elite team.

What?s it all mean?

My point: There remains a lot to play for, but the Spartans have work to do if they want to win the Legends for a second season in succession. Michigan figures to continue to keep getting better. And Nebraska could keep coming on. Plus, there?s Northwestern lurking.

Michigan State will get well next week with a visit from a bad Eastern Michigan team that?s coming off a 54-16 drubbing at Purdue. Then, Big Ten play begins Sept. 29 against Ohio State in what looks like a battle between the two best teams in the conference. In fact, if the Buckeyes weren?t on probation, it may be a preview of the Big Ten title game.