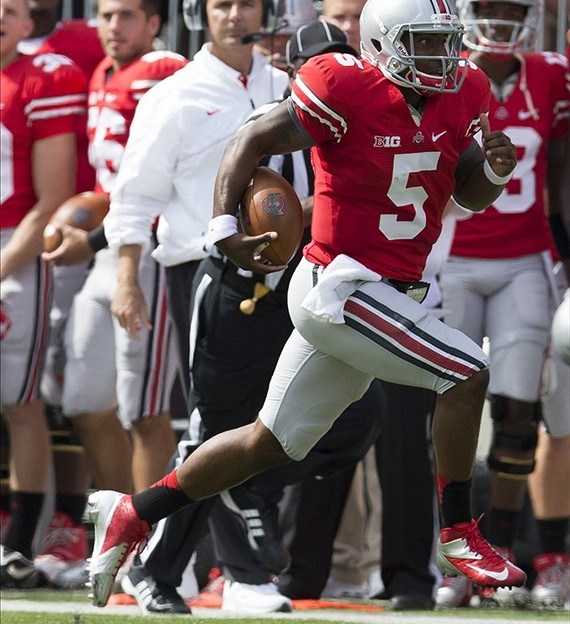 No. 12 Ohio State put up 13 points in the first, and the Buckeyes lead 13-7 at the end of the first quarter. Ohio State racked up 83 passing yards and 74 rushing yards in the quarter. The Buckeyes took the game's first lead after Braxton Miller took a quarterback draw all the way for a 55-yard touchdown run on the last play of a three-play, 61-yard drive.

Zach Maynard's 19-yard touchdown pass to Chris Harper gave California the lead, 7-6, and was the final play of a six-play, 75-yard drive. The Golden Bears crossed midfield on Isi Sofele's 26-yard run from the 25-yard line.

Ohio State will start the second quarter with the ball at midfield.

Why you should watch: Ohio State has looked good in dispatching Miami (Ohio) and Central Florida. But this will be the Buckeyes? first test vs. a team from a BCS league. Cal has a potentially strong defense that paced the Pac-12 last year. But, know this: Cal opened the season with a loss to Nevada and its lone win is over Southern Utah.

Keep an eye on: The Buckeye tailbacks. Jordan Hall has been cleared to play after missing the first two games with a foot injury, but will he get on the field? Carlos Hyde is out with a knee injury. That means true freshman Bri?onte Dunn is in line to be the top option. Whomever is tailback needs to take the burden off Braxton Miller, who has been carrying too big of a load.

Key matchup: Ohio State defensive line vs. Cal offensive line. The Buckeyes have struggled to get pressure on quarterbacks. And Cal?s Zach Maynard is good. Through two games, the Buckeyes have 1.5 sacks and rank last in the Big Ten in tackles for loss. Where are the big plays? This despite having what looks like one of the top fronts in the Big Ten. Facing a tepid Golden Bear front could allow this unit to finally turn up the heat.

Key number: 80.5, plays the offense is averaging in two games. This is reflective of the pace and tempo of the new no-huddle, spread attack.