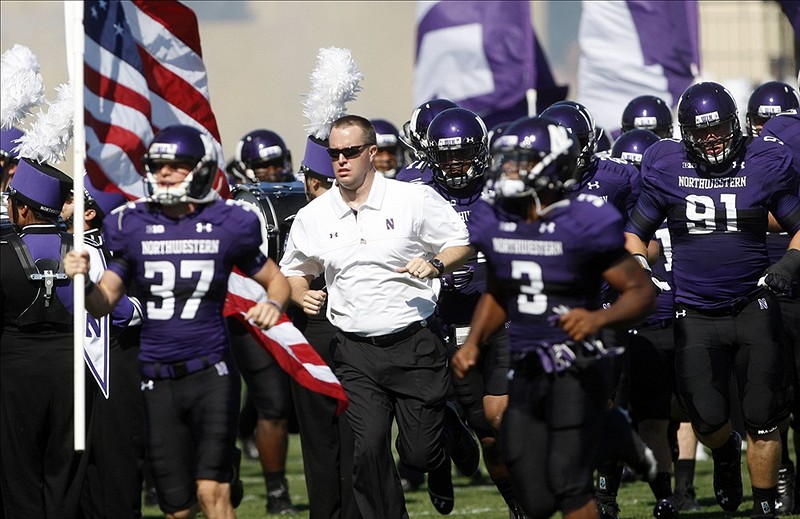 2. While the defense has picked up the pace, the Northwestern offense looked sluggish for a second week in a row. Vs. Vandy, the Wildcats had 324 yards, scoring two touchdowns with three field goals. Against Boston College, Northwestern kicked five fields and had 560 yards of offense with just one touchdown.

3. This may be Pat Fitzgerald?s best Northwestern team. Really. The Wildcats figure to move to 4-0 after playing host to South Dakota next week. The defense is playing well-and the offense has some nice playmakers. Could this team really make a run at the Legends Division title?

Michigan 63, UMass 13
1. Michigan remains a bit too one-dimensional on offense, still depending too much on Denard Robinson, who had 397 yards of offense and accounted for four touchdowns. The running game led by Fitz Toussaint needs to get into more of a rhythm to take pressure off Robinson, the closest thing to a one-man gang in the nation. Devin Gardner continues to emerge as a legit wideout, which is a good sign.

2. That?s two wins in a row for Michigan, which earned a gutty victory over Air Force the week before. So, the Wolverines take a two-game winning skein into a huge game at Notre Dame next Saturday.

3. The rush defense has come under scrutiny, ranking 11th in the Big Ten entering today (261.0 ypg). But the unit was able to boost its confidence today with a strong effort against an overmatched UMass team that is in its first FBS season.

Penn State 34, Navy 7
1. The Nittany Lions are alive. I wasn?t sure how Penn State could continue to summon grit and effort after two gut-wrenching losses. But the players and staff showed today they will fight each week in getting Bill O?Brien?s first win in State College to end a four-game losing streak dating to last year.

2. After two spotty efforts on offense, the Penn State attack showed life in notching 34 points and 341 yards. The team scored a combined 30 points in its first two games. The Nittany Lions did most of their damage through the air with 231 yards, as Matt McGloin hit 13-of-21 passes for four touchdowns.

3. Allen Robinson looks like he?s emerging as the go-to wideout and star offensive player. On this day, Robinson caught five passes for 136 yards and three touchdowns. The search for a playmaker at running back continues, as Bill Belton and Derek Day are beat up. So, on this day fullback Michael Zordich led the team in rushing. Hey, it worked on this day, it worked.

Iowa 27, Northern Iowa 16
1. The offense has a pulse! After scoring one touchdown in the first two games, the Hawkeyes exploded for THREE! Iowa entered the game averaging a Big Ten-low 12 points per game. So, 27 points was a virtual avalanche. The Hawkeyes needed a lift coming off an ugly 9-6 home loss to Iowa State last week. And they delivered vs. a pesky FCS Northern Iowa team. This should help restore the confidence of the Iowa program.

2. The hex at running back looks like it won?t go away. Damon Bullock and Greg Garmon both went down. No problem. Sophomore Mark Weisman-Mark Weisman?–ran 24 times for 113 yards and three touchdowns.

3. The Iowa passing game had struggled mightily the first two games, averaging 182.5 yards. But today, James Vandenberg hit 18-of-28 passes for 228 yards. Alas, he still doesn?t have a touchdown pass on the season. Wideout Kevonte Martin-Manley looked good in nabbing five passes for 101 yards, averaging 20.2 yards, for an attack that needs playmakers on the edge.