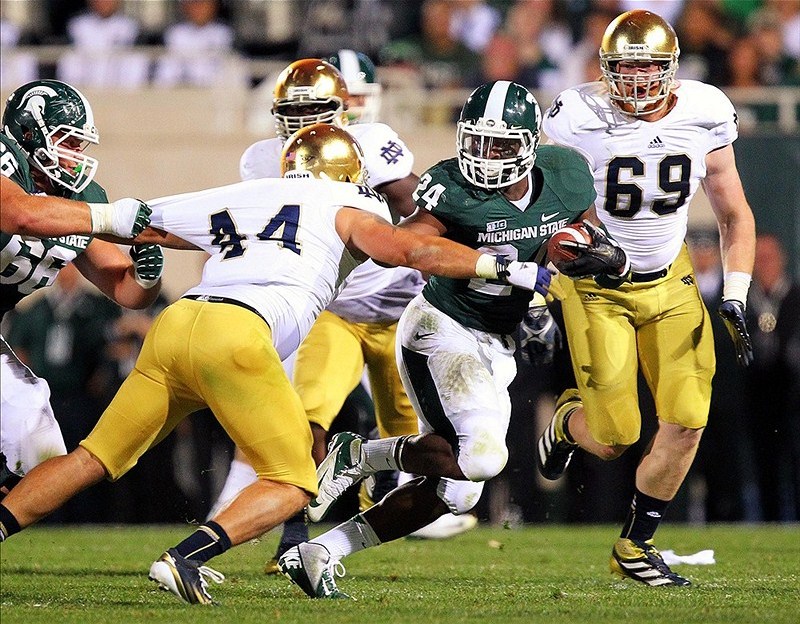 Everett Golson threw a touchdown pass and ran for a score to help No. 20 Notre Dame beat No. 10 Michigan State 20-3 Saturday night. The Fighting Irish (3-0) snapped a six-game losing streak against ranked teams and beat a top-10 opponent for the first time in seven years to give Brian Kelly a signature win in his third season.

FOURTH QUARTER: Big plays helped Notre Dame's offense break out on the way to a 20-3 victory over Michigan State on Saturday at Spartan Stadium. With 10:50 to go in the first quarter, Everett Golson and John Goodman combined for a 36-yard touchdown, the Fighting Irish's longest play on the day. The touchdown gave Notre Dame a 7-0 lead.

The Fighting Irish's defense stymied the Spartans' rushing attack. Notre Dame held Michigan State to a mere 50 yards on the ground. Golson carried the offensive load for the Fighting Irish, piling up seven rushing yards and one touchdown on three attempts.

Le'Veon Bell did his best to carry the Spartans' offense, turning 19 carries into 77 rushing yards.

Notre Dame's Golson was good for 178 yards during the game, completing 14 of 32 passes. Golson finished the game with one touchdown and no interceptions. Golson had a good connection with receiver Robby Toma. He hauled in five catches for 58 yards.

The Fighting Irish's offense finished the game having gained 306 yards. Along with Golson's stats in the passing game, Notre Dame also added 128 yards rushing on 34 attempts.