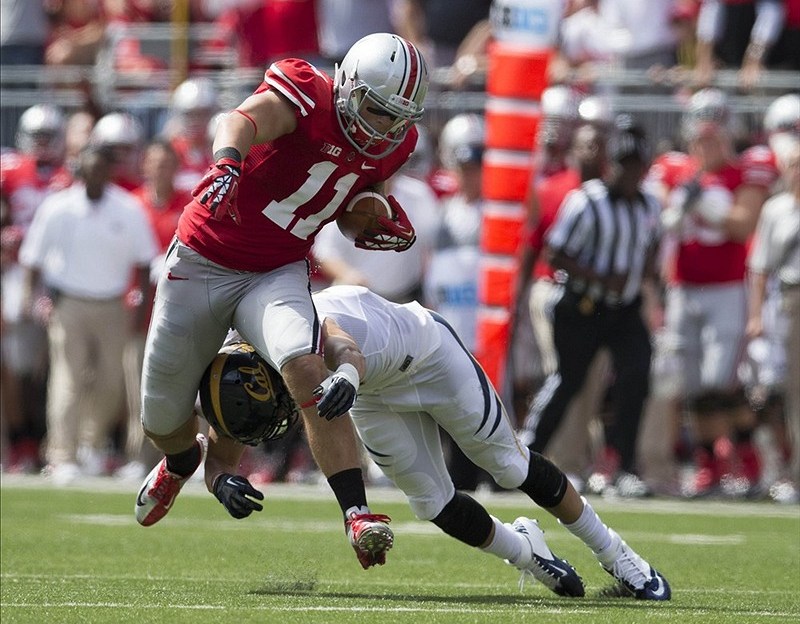 Braxton Miller lofted a 72-yard touchdown pass to an all-alone Devin Smith with 3:26 left and Christian Bryantsnuffed out California's last chance with an interception to power No. 12 Ohio State to a 35-28 win on Saturday. The Golden Bears (1-2) missed three field goals and had a touchdown called back by a penalty, while the Buckeyes (3-0) gave up 512 yards and were outplayed for much of the second half.

FOURTH QUARTER: Brendan Bigelow's 160 rushing yards and two touchdowns weren't enough to lead California to victory, as the Golden Bears fell 35-28 to No. 12 Ohio State on Saturday at Ohio Stadium. Braxton Miller piled up 249 yards and four touchdowns through the air on 16-for-30 passing and added 75 rushing yards and one rushing touchdown en route to the win.

With 3:26 to go, Miller found Devin Smith open for a 72-yard touchdown pass to give Ohio State a 35-28 lead. Ohio State burned California's defense for six plays of more than 20 yards.

The Golden Bears' Zach Maynard was good for 280 yards during the game, completing 26 of 37 passes. Maynard finished the game with one touchdown and one interception. Maynard looked for Keenan Allen often. He hauled in nine catches for 80 yards.

California finished with 512 total yards, including 288 yards passing while completing 27 of 38 attempts. The Golden Bears' rushing attack also contributed 224 yards to the total, with the tally coming on 41 carries.