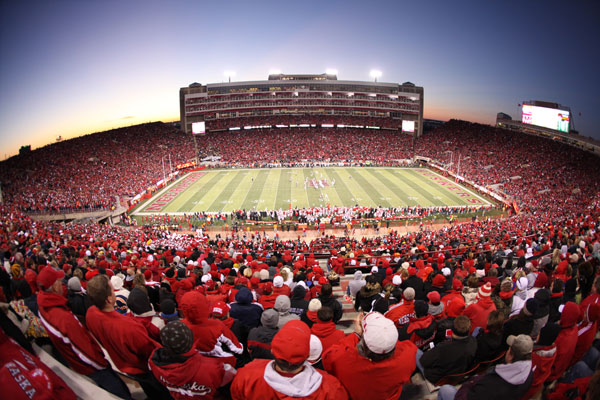 With news that Notre Dame is joining the ACC for all sports but football and leagues signing fresh blockbuster TV deals seemingly on a weekly basis, Nebraska fans may wonder: Was joining the Big Ten a smart move? Tom Shatel of the Omaha World-Herald is here to tell you that, yes, the Cornhuskers made a prudent decision.

Speaking of Notre Dame, Rob Oller of the Columbus Dispatch says the Fighting Irish?s decision to join the ACC for all sports but football shouldn?t be a shock.

The Irish are a national brand that will continue to get good exposure in the populated Northeast as well moving into the fast-growing Southeast, as the ACC brand extends up and down the eastern seaboard. And Notre Dame will continue to play in California at least once a year. Perfect! The Big Ten shouldn?t take offense, Oller says. And, he?s right. ND and the Big Ten will do just fine apart. But now with Notre Dame out of the picture, what would be the Big Ten?s next move if it did opt to expand?

Any chatter about Big Ten schools now dumping games with Notre Dame falls on deaf ears at Purdue, which annual plays the Fighting Irish. In fact, Purdue A.D. Morgan Burke issued a statement yesterday saying the Boilermakers plan to continue to play Notre Dame, a series that has taken place every year since 1946.

And Michigan and Michigan State, two other regulars on Notre Dame?s schedule, also want to stay there.

Michigan AD Dave Brandon hopes to keep playing football with ND after their contract expires in 2020, but says it'll be up to the Irish

Rolling Buckeyes: There is a lot to like about the Ohio State offense, what with quarterback Braxton Miller the early leader for Big Ten Player of the Year. But something is missing. And that something is production from the running back spot.

The good news: Jordan Hall may be ready to go this Saturday against Cal. He has missed the first two games with a foot injury. And his timing couldn?t be better, as Carlos Hyde is out with a knee injury suffered last week. That would leave true freshman Bri?onte Dunn as the likely starter with Rod Smith also in the mix if Hall can?t play. You thinking what I am thinking? Yes, it?s time to work in Hall.

Open for business: We all know the Michigan pass game needs some air pumped in it. To that end, the staff has looked to add some big targets.

With Denard Robinson lacking accuracy, it?s important for the Michigan receivers to be big options who can go get the ball and out battle defensive backs, as Junior Hemingway did last year. Neither Roy Roundtree nor Jeremy Gallon is that type of receiver. But backup quarterback Devin Gardner (6-4) and true freshman tight end Devin Funchess (6-5) are that kind of receiver.

In fact, Funchess may turn out to be a deadly weapon and most valuable newcomer on the roster after a breakout four-catch, 106-yard effort last week against Air Force. According to Kyle Meinke of MLive.com, that duo has accounted for 52.2 percent of the Wolverines? passing yards this season. Expect that trend to continue.

Gray mass: At 6-4 and roughly 250 pounds, Minnesota QB MarQueis Gray isn?t a guy who avoids contact. Would you if you possessed that size and strength?

Gray is a unique talent who appears poised for a big senior season. He leads the Big Ten in passing efficiency, while still being a threat to run for what could be the league?s Cinderella story in 2012. And when Gray has passed, one of his favorite targets has been tight end John Rabe, who has caught three of Gray?s four touchdown tosses to emerge as one of the Big Ten?s surprise weapons.

The redshirt freshman leads the team with three sacks and generally has been a pain in the neck to foes. And Barnes figures to only get better playing for line coach Larry Johnson, who was a major reason why Barnes opted to stay at Penn State and not transfer. Smart move by Barnes, as Johnson has developed lots of great defensive linemen over the years. Barnes is next.

Staff changes: Wisconsin coach Bret Bielema made a bold and perhaps season-altering move by canning offensive line coach Mike Markuson after a mere two games. And, Bielema had the approval of his boss, A.D. Barry Alvarez.

Alvarez never had to make such a move when he was head coach but understands Bielema?s reasons and endorsed the jarring dismissal. Now, let?s see if former G.A. Bart Miller-Bart Miller?-can whip the line in shape. The only thing at stake? The rest of the season.

The struggles up front have impacted running back Montee Ball. In fact, the inefficiencies up front likely have cost Ball any shot at winning the Heisman after he was a finalist last season. But the senior is dealing with it like a pro.

Ball led the nation with 1,923 yards rushing in 2011. This year, he is tied for 90th in the nation with some guy from Toledo named David Fluellen with a per-game average of 90.5.

New look: It seems every day, some team is unveiling a new uniform. On that note, check out the togs Iowa will wear on Veteran?s Day vs. Purdue. Yes? No? Maybe? Maybe not? My colleague Brent Yarina has more on this.

Kaz likes his linemen's approach this week. However, ?The train?s moving. We've got to quit talking about it. We have to walk the walk."

My take: ?Kaz? is Nebraska defensive line coach Rick Kaczenski. And his unit may get an influx of help from freshmen as it searches for answers up front while bidding ?good-bye? to tackle Chase Rome, who has left the team.

My take: If it doesn?t, then Illinois has deep problems.

Freshman WR Andre McDonald has been practicing this week and will play. Sat out New Hampshire game after an infection from turf toe

My take: Getting this talent on the field would give QB MarQueis Gray another nice target and weapon in an offense that looks dynamic. McDonald was one of Minnesota?s top signees last February.

My take: You know that phrase, ?Be careful for what you wish for, because you may get it?? Well, we no doubt will see how well the Buckeye wideouts deal with this. QB Braxton Miller, too.